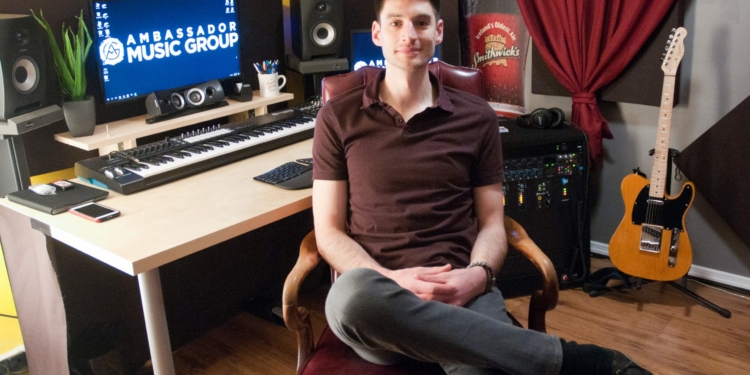 Andrew Gabriel sits for a picture in front of his desk. It’s the hub of his music studio. The tools of his trade sit upon its surface in precise symmetry. The flat screen monitor shines with Ambassador Music Group embossed in white against a royal blue field. Below it sits the ivory and ebony keyboard flanked to its left by his daily planner. The distance between the planner and the keyboard is equidistant with the space between the planner and the edge of the desk. His iPhone sits centered in front of it.

The sight implies that a systematic methodology is at play, contrasted by the two unfastened buttons on Gabriel’s polo shirt. Perhaps it’s a conscious effort to preserve the acoustics in the room. Maybe it’s the side product of his years meticulously hitting the right points on the snare drum. Or, it could all be that from a mind molded by applied mathematics at the University of California at Los Angeles. Nonetheless, it is an embodiment of control, something of which he is relinquishing.

As Gabriel sits down for an interview, he is days away from taking a leap. He is quitting his job to spear headlong into a dream of opening his studio and pursuing a music career; one that, up until this point, was a 12-hour-a-day gig on top of his eight-hour days as an information technology manager for Community First Credit Union. The order of living in the corporate world will be tossed aside, and he is as excited as “a kid who’s a week away from summer break.”

Andrew, and his wife, Rose Gabriel are the marketing and managerial team behind the recent success of local musician Sydney Worthley — who has taken last year’s performance at Tulip Fest and, on the strength of her debut album “Strong,” has moved on to a scheduled appearance at Mountain Jam in June. The Ambassador Music Group also represents local recording artist Michael Razzano.

The Ambassador Music Group is now a full-time endeavor, with a recording studio that caters to musicians and vocal talent. It’s a dream job that Andrew has held on to since his days as a musician in the San Francisco-Los Angeles West Coast megalopolis. Rose describes her husband as “determined.” Tenacious may be more appropriate. Once Andrew has an idea in his head, Rose said he is determined to see it through.

Since moving from the West Coast more than two years ago, Andrew has worked his day job as a programmer, and pursued his passion for music in the evening. That passion led him to working relationships with David Bourgeois of White Lake Music & Post studios and WEXT program director Chris Wienk. Ultimately, Andrew worked as an intern at Overit Studios, with the help of Adam Clairmont. Andrew shares those names as he describes the Capital District’s music scene as a “community.”

“The community aspect of the music scene here is unlike anywhere I’ve been,” said Andrew. “It’s unlike Los Angeles. It’s unlike San Francisco Bay area.” The amount of talent in the area scene is “crazy.” And, unlike the West Coast, the

players within it are not fighting each other to gain attention. “The folks that we’ve worked with are always willing to help out. It’s not like cut-throat competition, where folks are trying to sabotage other folks. … The scene here tries to make the scene grow.”

Last May, Andrew’s first client, Sydney Worthley, took to the Washington Park stage for Albany’s annual Tulip Festival. Outside of talent shows across the Capital District, it was the teen’s first performance before a crowd. She was already at work writing songs for what would be her debut release “Strong.” For the first time, Worthley could see strangers snapping pictures and capturing videos on their phones as she performed.

Worthley dropped her CD the following September. All 14 of her songs presented within a slick, high-gloss plastic CD cover. Radio play followed, as did an invite to perform at the lineup announcement for Saratoga Springs’ annual First Night. A meeting with WDST-FM in Woodstock opened yet another opportunity. The station organizes one of the largest three-day music festivals in New York.

“Sydney would be a good fit for Mountain Jam,” Andrew recalled saying, recognizing the chance to keep momentum moving. Rose recalled it took more persistence than that. That attention to detail, and Worthley’s climb within the local music scene, helped.

The Gabriels hope to take success and pay it back through outreach programs. Last October, the couple helped raise funds and goods to assist the more than 2,800 households victimized by a firestorm that swept through Santa Rosa, Calf. AMG delivered more than 3,000 respirators, and raised money to help replace backpacks, jackets, shoes and lunch boxes for local school children. That focus to help give others a boost on to their own feet translates back to the Gabriels’ goal for our music scene.

“I think there’s potential for something bigger to happen in the music scene, here, in Albany,” said Rose. “And, we’re on the brink of making it bigger than what it is right now. I think we’re all trying to make it happen.”