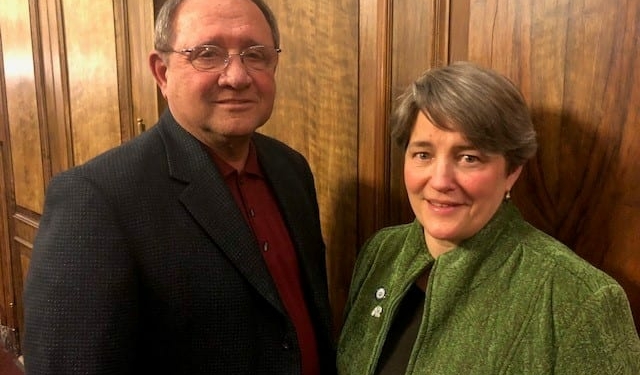 After rumors surfaced that members were seeking to replace Majority Leader Gary Domalewicz (D-Albany), who had lost the confidence of Chairman Andrew Joyce and other party members after failing to implement certain systemic reforms, Domalewicz resigned his position during a closed caucus on Wednesday, April 4—only three months after he was elected in a reformist coup that led to the toppling of longtime Majority Leader Frank Commisso (D-Albany), who resigned during a January caucus called by Joyce “to facilitate a productive discussion on the future of their caucus.”*

In an effort to heal persistent internal divisions within his party, the newly elected Feeney has named two new deputy majority leaders: Gil Ethier (D-Cohoes), the longest serving member of the Legislature and a former deputy under Commisso; and Lynne Lekakis (D-Albany), a well-liked first-term legislator generally aligned with reformists.

“I chose Legislators Gil Ethier and Lynne Lekakis as deputies because I believe they will help me unify the Democratic Caucus,” said Feeney. “It’s time to come together as Albany County Democrats and deliver strong and steady leadership. Gil brings tons of experience. Lynne has new ideas. It’s a nice mix.”

In addition to serving two years as deputy majority leader, Ethier has served on virtually every legislative committee and chaired the Public Safety and Public Works committees for several years. He currently co-chairs the Elder Care Committee and serves on the Conservation & Improvement and Mass Transit committees. He has been chairman of the Cohoes Democratic Committee since 2002.

“I want to thank the Majority Leader for the vote of confidence to fix the caucus,” Deputy Majority Leader Ethier said. “I want a caucus where input comes from membership and their constituents, not leadership. That will make a strong caucus.”

Ethier also co-chairs the Legislative Rules Reform Task Force, which Joyce (D-Albany) charged with updating the body’s rules of order. Over the last few months, he has already been working to reform the Legislature with Lekakis, who is co-chair of the Legislative Modernization Task Force.

Lekakis serves as vice-chair of the Personnel Committee, and a member of the Health, Conservation & Improvement and Mass Transit committees. In October, she introduced an equity-pay law that prohibits employers in Albany County from inquiring about a job applicant’s salary history before offering them employment. It passed unanimously, making Albany County among the first municipalities in the state to enact such a law.

(Gov. Andrew Cuomo has followed her lead by proposing a law on Tuesday to ban private and public employers from asking applicants about their salary history.)

Lekakis is a partner in a consulting firm that has worked with Equinox, United Way, the Women’s Bar Association, Neighborhood Resource Center and other community organizations. She also serves as facilities coordinator at Upper Hudson Planned Parenthood and served four terms as a board president of the Honest Weight Food Co-op, leading the store through several governance changes.

“Changing and modernizing the Legislature is challenging, and I intend to help the process,” she said on Tuesday. “Democrats in the Legislature are eager to move forward together and it’s time we got to it.”

(*Commisso contacted Spotlight News after publication to take issue with the characterization of his departure from the Office of the Majority Leader as anything other than a personal decision. )