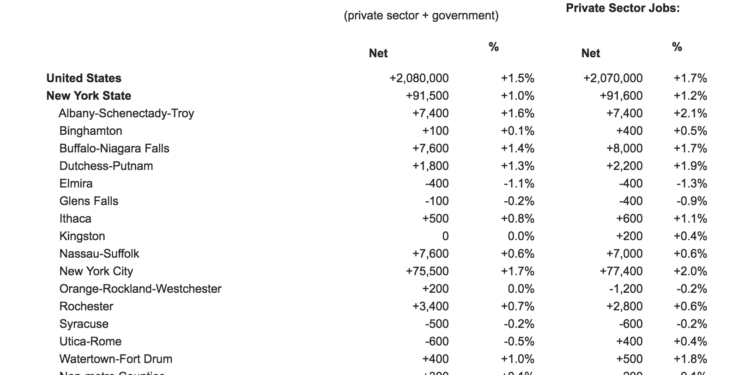 The number of private sector jobs in New York state reached an all-time high in 2017, according to new numbers released by the U.S. Bureau of Labor Statistics.

And from January, 2017 to January, 2018, the Albany-Schenectady-Troy area had the largest employment growth in the state at 2.1 percent. The Capital District is followed by New York City with a 2 percent growth rate and the Dutchess-Putnam area at 1.9 percent.

News of the record breaking 8.1 million statewide private sector jobs comes coupled with the state’s lowest unemployment rate in a decade at 4.7 percent.

“In 2017, our annual private sector job count exceeded 8 million for the first time and the state’s jobless rate reached its lowest yearly level since 2007,” said Bohdan M. Wynnyk, director of the state Department of Labor’s Division of Research and Statistics.

The state’s private sector job count is based on a payroll survey of 18,000 New York employers conducted by the U.S. Department of Labor’s Bureau of Labor Statistics.

Since January, 2017, the sectors with the most job gains in this state were:

The sectors with the greatest job loss were:

The unemployment rate in January, 2018, though, remains unchanged at 4.7 percent, which is higher than the nationwide rate of 4.1 percent.