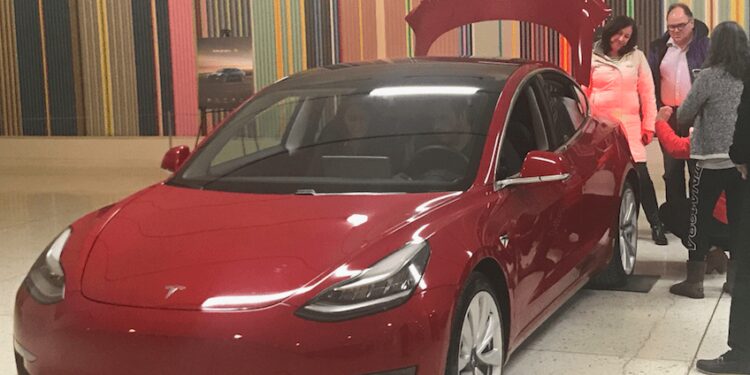 ALBANY—On Monday, Feb. 26, Tesla made the first stop on its first Model 3 Road Trip and Policy Forum. More than 1,000 attendees came through the Empire State Plaza, viewed the Model 3 on display, interacted with Model S and X vehicles and spoke with Tesla product experts about the company’s cars and energy products. Assembly Majority Leader Joe Morelle (D-136) and Assemblymember Patricia Fahy (D-109) also spoke about the importance of local access to sustainable energy products, such as the solar tiles made at Tesla’s Gigafactory 2 in Buffalo.

During the event, Tesla representatives spoke about legislation that would allow the company to operate more than five stores in New York state, and require them to commit to opening an Albany-area store. State law currently restricts Tesla to five sales licenses in New York, and all existing stores are located downstate.

Assembly Bill 8248, introduced by Morelle, would require Tesla to locate at least five of fifteen new stores upstate, with one each in the Albany, Buffalo, Rochester, Syracuse and Upper Hudson Valley areas. Its companion bill, which is currently before the Labor Committee in the state Senate, is Senate Bill 6600, and was introduced by Senator George Amedore (R-46).

“Tesla is pleased to bring Model 3 to Albany, home to many Tesla owners and Model 3 reservation holders, and two Supercharger stations that let customers travel long distances throughout New York state,” said a company spokesperson. The proposed legislation, he said, “would enable Tesla to invest further in the state by opening additional stores and service centers in New York and employing local workers in the Capital Region. These additional locations would expand access to sustainable energy products throughout New York State.”

Saying he would be thrilled to see a Tesla store open locally, Albany County Executive Dan McCoy added, “Allowing Tesla to deepen its roots here would help clear the air we breathe and create good, innovative jobs, making our county an even better place to live and work.”

“There is a real sense of excitement in the Capital Region around electric vehicles,” said Fahy. “My constituents want to be able to look at and buy electric vehicles like the Tesla Model 3. Approving further investments by Tesla Upstate will help expand the green economy, spur job growth and encourage the use of electric vehicles. New York is not even in the top ten states of electric vehicle sales in this country, and we must do better.”

Tesla would also expand its electric vehicle charging infrastructure investments in the Capital District, which currently has two Superchargers—one with six stalls at Colonie Center and one with twenty stalls at Crossgates Mall, the largest in the Northeast.

The Model 3 will make its next stop in Syracuse on Tuesday, Feb. 27, followed by stops in Rochester on Wednesday, Feb. 28th and Buffalo on Thursday, March 1.

HEALTH & FITNESS: Reasons to head to your coffee shop today