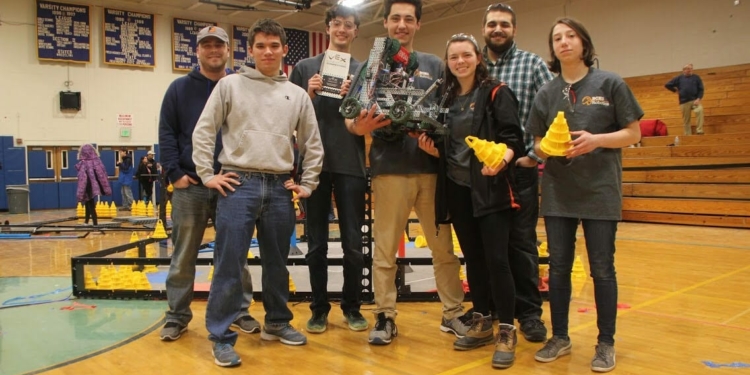 BETHLEHEM — Since the beginning of the school year, the brand new BCHS Robotics Club has been working to design, build, program and test robots to compete in the 2018 VEX Robotics Competition In The Zone, which was held at Queensbury High School on Saturday, Jan. 21.

The club thanked Science/Technology Supervisor Jen Gonyea for her support, the parents who were able to come and cheer for the BCHS teams, and the Robotics Education Foundation for providing a team grant.

VEX Robotics is a design platform for students providing hands-on discovery of career opportunities in science, technology, engineering and math (STEM). Students design robots that then compete against each other in variety of matches.

The VEX Robotics Competition In the Zone is played on a 12’x12’ square “field” resembling a game board. Two alliances — one “red” and one “blue” — composed of two teams each, compete in matches consisting of a 15 second autonomous period followed by one minute and forty-five seconds of driver-controlled play. The object of the game is to attain a higher score than the opposing alliance by using the robots to stack cones on goals, score in goal zones, build the highest stacks, and by “parking” the robots. A bonus is awarded to the Alliance that has the most total points at the end of the autonomous period.

“All the teamwork, late nights and dedication they put into being successful was great to witness,” said Club Advisor Eric Fana. “One great aspect of these competitions is the bond that forms between teammates. As problems arise, they have to quickly problem solve to overcome them.”

The BCHS team is now preparing for the Northern New York State Championship, which is slated to take place on Sunday, March 11, in Syracuse.