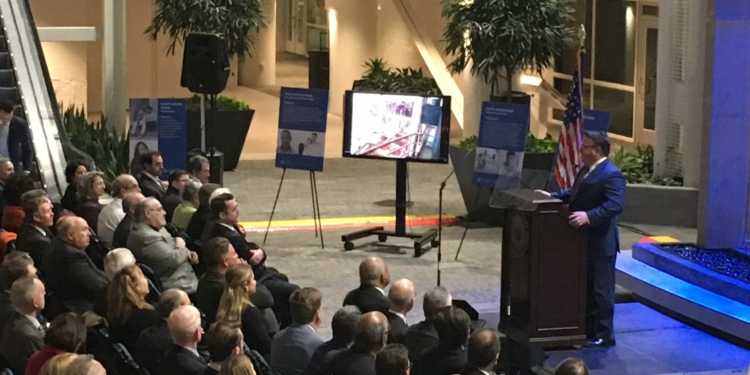 ALBANY COUNTY — Moriah Formica sang the national anthem before Albany County Executive Dan McCoy delivered his seventh State of the County address in the atrium of the Times Union Center on Thursday, Jan. 25.

“As we continue to face the very real possibility of even more cuts and more unfunded mandates from Washington and from New York state, it is critical to remind ourselves of the mission of County government and what is at stake,” said McCoy. “Our mission is about serving those most at need in our community… so as to improve their lives and the quality of life of our community.”

Using the recently renovated county-operated Times Union Center as an example, McCoy was full of praise for county employees, elected representatives and others who have worked on various county projects and initiatives. According to a list of “101 Ways Albany County Serves and Strengthens the Quality of Our Communities,” published by the county executive’s office, the TU Center generates roughly $1 million in annual revenue and employs 479 part time and 32 full time employees.

McCoy talked about the upcoming renovation of the county nursing home, noting its significant financial turnaround since he and the legislature agreed to work together on the notorious money pit; the work that was done to identify millions in municipal savings through shared service agreements; and an agreement with Saratoga County to build and operate an organic waste facility. He spoke of the work done by each county department, commending them for various accomplishments and efforts, and he talked about immigration, children, poverty, veterans, the environment and the opioid crisis.

One highlight of the speech included a statement that McCoy had, earlier in the day, signed an executive order stating that the policy of his administration is that no settlement agreement entered into by the county in employment-related cases involving harassment or discrimination will be allowed to contain a nondisclosure provision.

“All across the county we have seen far too many cases of harassment [law suits] being covered up with financial payoffs,” he said. “While we will protect victims who wish to maintain their privacy, employees, no matter how senior, should not and will not be protected by such agreements. I have also directed our County Attorney to submit draft legislation to our Legislature, banning such agreements county-wide and I look forward to action on this important issue.”

He also announced he’s submitted legislation that would guarantee all employees in Albany County have the right to earn sick leave. “Approximately 40 percent of workers in our county lack even a single paid sick day,” he said. “This legislation will result in healthier workplaces, improved child and family well-being and reduced healthcare costs.”

McCoy took care to recognize long-time Democratic party leader Frank Commisso and Sean Ward, both of whom recently left leadership positions in the County Legislature. McCoy worked closely with both men, as county executive and, before that, as a legislator himself. Speaking fondly of each, he thanked them for their service before welcoming the Legislature’s newly elected Chair Andrew Joyce and Majority Leader Gary Domalewicz, and saying he looks forward to working with them as well.

“Tonight I can say, without reservation, that the state of our county is strong and that working together we will make it even stronger, more inclusive and more equitable. It is our mission and it is my commitment,” said McCoy.

He wrapped up his address with a quote from Bobby Kennedy:

The full 2018 State of the County message can be found here: http://www.albanycounty.com/sotc.aspx

Republican Legislator Mark Grimm said he would have liked to see more emphasis on controlling county spending and ideas for new job creation, and that he felt that his criticism of federal immigration policy was “misplaced.” Grimm also said, “Dan McCoy rightfully underscored some significant achievements: the flat tax rate, TU and nursing home upgrades, and his new executive order to require full disclosure for any sex harassment deals.”