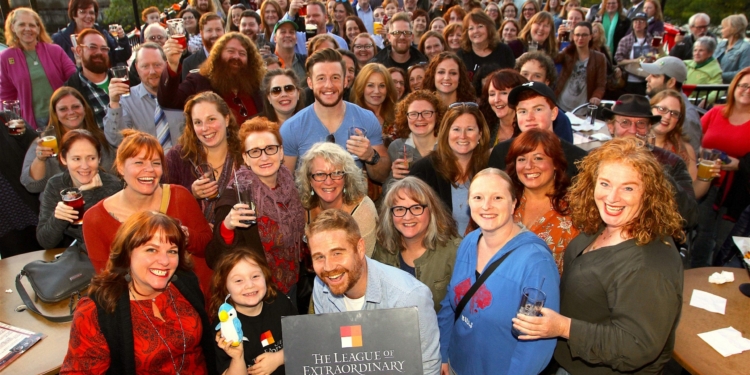 TROY — It’s a fall tradition five years in the making: hundreds of naturally red haired people gather in a small upstate New York city to toast the season when the colors of the world turn to match their own — auburn, orange, ginger and strawberry blonde.

On Wednesday, Oct. 4, starting at 5 p.m., The League of Extraordinary Red Heads will present “Night of the Walking Red V” at Ryan’s Wake Public House, located at 403 River St. in downtown Troy.

The fiery festivities feature an autumnal rite known as the “Toast of The Coppertops,” during which members of the red-haired collective raise glasses of seasonal Pumpkin Ale (this year’s batch is by Ithaca Beer Co.). Looming above them will be a 15-foot vinyl sign bearing the League’s registered trademark logo and the concisely stated: “Agenda 1) Us. 2) Them.”

There will be a sunset group photograph on the deck at 6:15 p.m. Entertainment will include a caricature artist, a photo booth, a t-shirt printing station provided by Troy Cloth & Paper and other fun activities.  Admission is free. Children are welcome with supervision. The League gives special recognition to “Distinguished White Heads,” such as Santa Claus, whose ginger hair has turned white. Un-red heads are also welcome to witness the crimson jubilee.

Last October, more than 200 red haired folks came to the party, traveling from as far away as New Jersey, Buffalo, Saranac Lake and

The League of Extraordinary Red Heads formed in a flash in Troy on Jan. 30, 2013 and quickly earned the rank of No. 7 in the world for “Best Redheaded Gatherings of 2013” according to social media website, BuzzFeed.  League gatherings typically attract more than 100 red-haired participants. Attendance for last year’s Night of the Walking Red IV broke 200.

Though this highly visible group assembles suddenly in public spaces, not much is known of the inner workings or its true purpose. It purports to be “a social get-together for those with reddish hair and those who love them,” but some suspect it may be a drinking club with vague plans for world domination. These conspiracy theories are bolstered by the fact that red heads comprise only 2 percent of the human population, and yet — for scientifically unexplained reasons — their ranks include a disproportionately high number of prominent figures, including world leaders, famous authors and celebrity actors. People of all types and backgrounds can have natural red hair.

DAN ROMAND: Top 3 foods you should be eating