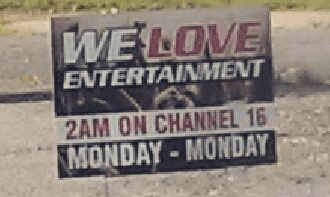 SCHENECTADY — If one waits until 1:30 a.m., turns on their TV and sets it to Open Stage Media (OSM) Channel 16, they would encounter a series of shows that covers entertainment, politics and local news. These late-night shows make up the “We Love Entertainment” brand that Shawn Panella and Yusuf Amir, its so-called original founders, worked hard to develop, maintain and contribute content for.

The brand comprises of six shows that air on variable nights throughout a typical week.

Maintained by Brian Roosevelt, “Schenectady Underground Come-Up” airs on Tuesdays and Fridays at 2 a.m., focusing on local musicians and artists who don’t have to look or act a certain way, giving them freedom do whatever they desire. Airing on Tuesdays and Thursdays at 2:30 a.m., “Game Over” is where arcade games are played onscreen, ranging from vintage ones from past decades to recent ones. Hosted by Will Rankin, “Justice 4 All” is on Mondays, Wednesdays and Fridays at 1:30 a.m. which concerns local politics. “TV Movement,” hosted by Amir, airs on Mondays and Thursdays at 2 a.m. while “What’s On TV” airs on Wednesdays, Saturdays and Sundays at 2 a.m., concerning art and local talents. Founded by Jess Petrequin, “JP News” airs on Mondays and Wednesdays at 10:30 p.m. and also Saturdays at 7:30 p.m—it covers local news.

Panella reminisced about how one day back in around 2012, he, Amir, Roosevelt and Rankin were sitting at a small Schenectady store where they usually ate, when they looked out the window and saw a filming crew nearby. Filming for the crime drama movie, “The Place Beyond the Pines” was actually underway there, which starred Ryan Gosling, Bradley Cooper and Eva Mendes.

“The house we used to aimlessly stare at happened to be [where the movie] was being filmed and that really gave us the motivation to come up with our own shows,” said Panella, who’d been planning to start a brand prior.

He said that he and Amir even went to the filming site and got to meet director Derek Cianfrance as well as Gosling and Mendes.

He also remembered that “Ryan [Gosling] said ‘Listen, I’m not allowed to do certain movies, my agent won’t allow me, the company that I work for doesn’t allow me to do some things.’ He was basically telling us to never get noticed and just be on our own so that we can have our own flexibility, be our own CEO and make our own decisions.”

Panella had taken digital classes at Schenectady County Community College while Amir previously worked with someone involved with cinematography prior to meeting Shawn.

Since starting up We Love Entertainment shortly afterwards, they have gradually expanded it by having product placement with Death Wish Coffee, Christian Audigier (founder of Ed Hardy) and SiriusXM.

“Our most local sponsor that even volunteered flyers to us was Printz & Patternz on Altamont Ave in Schenectady,” Panella said. “The guy there was originally an entrepreneur himself who started working in the cellar and then opened up his own business. He said, ‘Hey, I like your shows’ and we were very humbled by that.”

Amir hopes that the shows would “inspire local artists that are too afraid to come out of their comfort zone and say they can do it. As long as you believe in yourself and keep working at it every day, you will make it.”

The celebrating-the-underdog sentiment was echoed by Brian Roosevelt who uses his show to create music videos or films of locals who are “trying to make their way in the world without having the money to actually afford to go about what they do in the streets.” He then posts them on his show and on social media so that they can gain more recognition and visibility online. Roosevelt also said that he plans to set up a recording studio and label—they will be funded by the money he’d have made from his videos and documentaries—which will be in conjunction with his show.

“I’m trying to help the little guy so that when they get their stuff out there, they actually can be heard,” he said.

Jess Petrequin, creator and producer of JP News (a Schenectady-based local freelance news organization), aims to showcase a more all-encompassing form of journalism. Using a local fire as an example, he said that he’d “do a story about everything related to the fire whereas typical news focuses just on the fire.” He interviewed not only people who were directly affected but also the firefighters, and the people who were not affected, and discovered potentially intriguing human interest stories in relation to the fire. He noted that when the March 2015 Jay Street fire happened, reporters came in and out, only caring about the fire and a couple of affected people.

Despite all the creators’ best intentions, getting the brand’s name out there is still an ongoing obstacle and they typically hand out flyers to promote the shows. For more information, Panella can be contacted at shawnpanellagmail.com and (518) 542-2671 and Amir maintains his own website, arsenalmusic.weebly.com.

LETTER to the EDITOR: ‘A Message to Coaches’