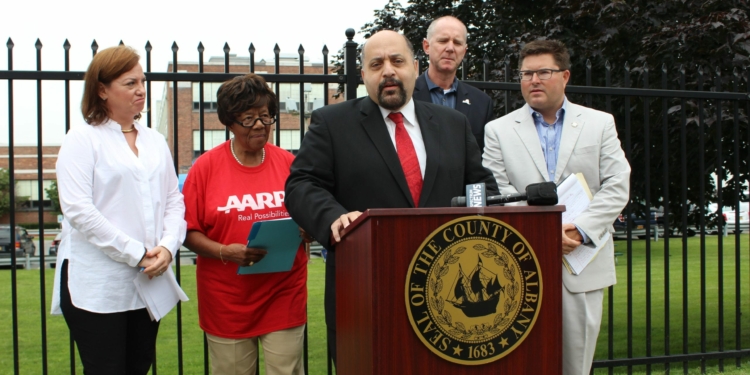 Claiming revenue deficits caused by increased capital expenditures, as well as operation and maintenance costs, National Grid is seeking to raise revenues in New York by $330.7 million annually. The UK-based utility company estimates that a typical residential energy consumer would be paying an additional $107 for electricity delivery and $104 for gas delivery annually under the requested increase. (Supply charges, which are determined in the competitive market, would be unaffected.)

Legislators and public advocates in Albany County, arguing that the additional expense will do disproportionate damage to the state’s most vulnerable residents and have widespread economic consequences for all New Yorkers, are opposing the requested rate hikes and encouraging others to do the same.

“We’re not paying for this just once,” said McLean Lane, explaining that increased energy costs for businesses and government-run institutions will also be passed on to consumers and taxpayers. “This is something that could potentially affect the rate of inflation across upstate New York.”

Like most large public utility providers, National Grid is regulated by a public utilities commission, PSC in New York state, and must obtain approval before raising rates. The company must also be approved to increase its return on equity (ROE), the amount of profit it can make before it needs to share those profits with consumers.

The last time PSC last approved a revenue increase for National Grid, in the amount of $131.8 million, in 2013. In 2016, the company agreed to freeze rates through March 2018 in return for permission to use $152 million in credits owed to consumers. Under that agreement, PSC also reduced the company’s ROE, from 9.3 percent to 9 percent. In April of this year, National Grid submitted its rate request to PSC, initially proposing to increase revenues by more than $400 million, as well as requesting an ROE increase to 9.79 percent.

National Grid has indicated that the additional revenues will pay for: electric transmission and system improvements, including measures to address aging infrastructure and areas with growing energy needs; modernization of distribution and management systems, which it claims will improve outage restoration and asset management; new sustainable energy and energy efficiency programs; replacement of nearly 700 miles of leak-prone pipe; the standardization and incentivizing of LED street lights; and the replacement of electric and gas meters with new smart meters that collect detailed information regarding the energy consumption of each rate-payer. Since 2008, National Grid claims it has invested nearly $6 billion in energy infrastructure and systems across the state.

Some groups have applauded the company’s proposal to increase funding for low-income programs, including providing tiered monthly bill discounts to customers who receive a Home Energy Assistance Program (HEAP) benefit. However, the vast majority of the 1700-plus comments on the case are opposed to the increase. Many of the comments have come from people who are already having difficulty making ends meet, including a significant number of senior citizens who are living on a fixed income.

If the proposed legislation passes, Albany County would join the cities of Albany, Buffalo and Syracuse, and 62 other listed parties, in providing evidence and testimony to PSC regarding the proposed increase. Individuals, whether for or against the increase, are also able to request party status.

Richard Berkley, executive director of the Public Utility Law Project of New York (PULP), is urging anyone who is unhappy about the proposed rate increases to commit to any level of involvement opposing the company’s request. He said there are a number of different ways individuals and groups can influence PSC’s decision.

Without becoming a party, anyone can still organize people behind the scenes to turn out for public hearings and file their own comments with the state, contacting legislators and talking to the press. As a listed party, however, there are more options. One could simply stay abreast of the filings and responses or become more involved by offering statements, cross-examining witnesses and/or filing discovery requests. Parties are also able to sponsor expert witnesses to enter testimony into the case.

“That’s why you become a party,” said Berkley. “If you’re not a party, then you can’t do anything in the settlement process.”

He explained that parties are also able to ask for pilot programs to be conducted, money to be directed to local economic development projects or a change in the way a company operates. PULP, for instance, is very concerned about National Grid’s collection practices and he expects his organization will submit a request that the company amend its current procedures.

Berkley described joining the settlement process ultimately as a chance to test the company’s assertions, question its practices, look at its books and influence its behavior. (National Grid’s low-income plan, he said, is a result of that very process.) For that reason, PULP generally opposes multi-year rate plans — which may cushion the blow of substantial rate hikes by spreading them out over multiple years — because they allow the utility to operate with substantially less oversight during the intervening years.

State law requires PSC to render a decision within 11 months of the rate filing. The commission can adopt or reject it entirely or in part, as well as modify it by including changes proposed by the public, parties or PSC commissioners themselves. Individuals who would like to comment on the proposed rate increase can submit comments directly to the case through the Department of Public Service website at www.dps.ny.gov, email DPS Secretary Kathleen Burgess at [email protected] or call 1-800-335-2120 (reference case numbers 17-E-0238 and 17-G-0239).

Twyla Tharp, the iconic dancer and choreographer, would rather be seen simply as a worker