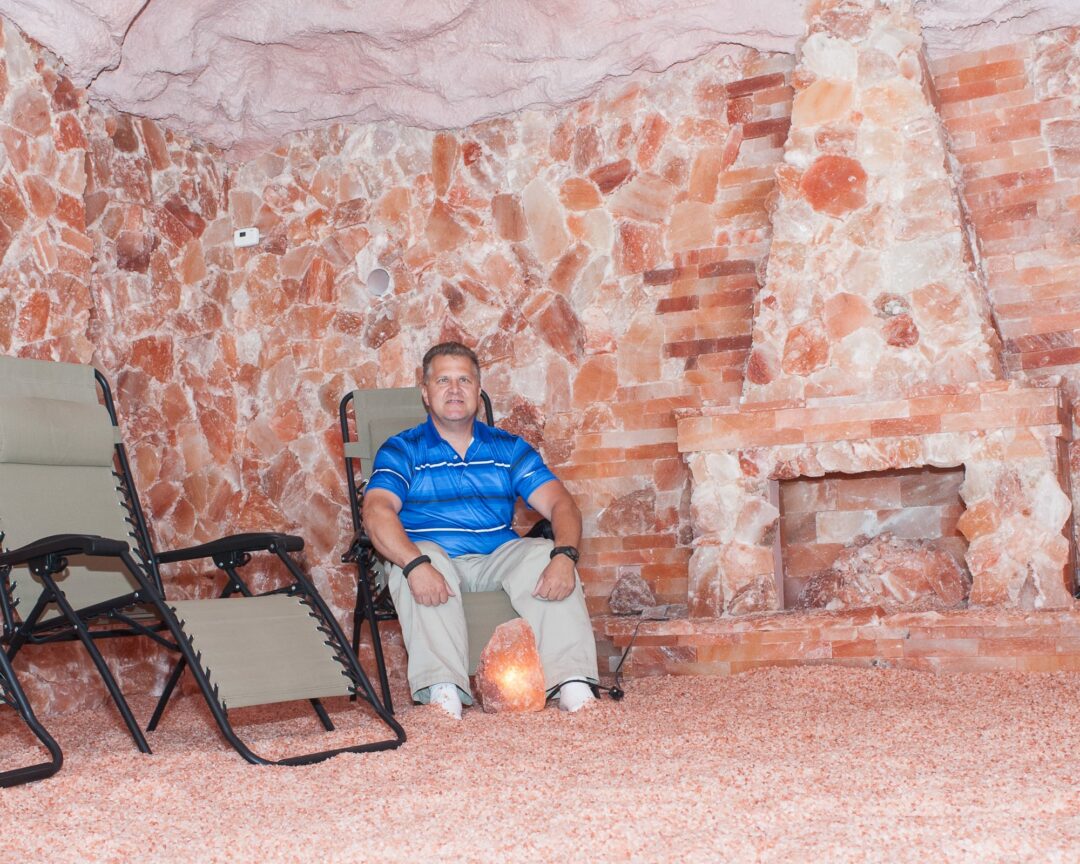 COLONIE — While halotherapy has been around for centuries, it has only made its way to the Capital District within the last few months.

“Halo” is the Greek word for salt, and sitting in a room full of salt – especially salt from the Himalayan Mountain Range, which has all 82 trace minerals found in the human body — not only helps a variety of ailments and conditions, but is a natural, non-medical stress reliever as well.

Seventy thousand pounds of such salt is in the salt cave at the newly opened wellness studio, the Salt Den, on Watervliet Shaker Road. The owner Robert Duff, also offers a dry, infrared sauna which penetrates the tissue deeper than a traditional, wet sauna, red light therapy, which increases circulation and helps with skin conditions, as well as a number of different massage therapy modalities.

The “Boots to Business” graduate and 21-year Navy Reserve corpsman and chief petty officer, recently won the Excellence in Entrepreneurship award by the Watervliet Arsenal Business and Technology Partnership for opening his shop.

“A lot of people are sick of the health care system and the doctors and the other providers just pushing medications. They tell you to take this or that, and tell you how wonderful it is but they gloss over the side effects,” Duff said while standing outside his newly opened infrared sauna room. “People are looking for other ways to treat symptoms and some Middle Eastern cultures have used some holistic methods for centuries.”

are chunks on the floor that make up a beach of sorts where you can walk around or sit in one of the lounge chairs.

Rubbing the salt on your hands makes them kind of tingle, and you immediately feel different after walking in the room, but that’s not because of anything you see. Behind the scenes, there is a halo-generator that crushes the salt into small particles and disperses it into the air. The air concentration can be adjusted based on the severity of the client’s condition or otherwise accommodate the client or group.

“I feel relaxed” said Michelle Lansing after exiting the salt cave on Friday, Aug. 4. “I have a bit of psoriasis and I’ve been trying to find a way to treat it holistically rather than medications and I’ve found this works.”

In addition to skin conditions, halotherapy is also known for helping with respiratory ailments like COPD by “helping to open up constricted airways allowing breathing to become easier.”

Duff said salt therapy has been used by monks for centuries, but in the 1840s, it was noted that salt miners in Poland were healthier than other mine workers, so they started sending people to the mines for treatment of things like respiratory and skin disorders. The Russians, he said, were the first to bring it above ground and focus energies on halotherapy.

He experienced its benefits second-hand, seeing how much it helped his father’s asthma after the elder Duff visited a salt den in Florida.

While the salt cave might be the center’s main attraction, Duff is attempting to provide a number of different services to clients as young as 1-year-olds, with a focus on vets and mothers.

“Vets don’t like to ask for help and too often just go to a clinic and they give you medications and send you on your way,” he said. “And our other main target is the mother; the female between 25 and 45 because they are the people who take care of everyone else.”

Prior to Duff’s shop, the nearest salt dens were in Rutland, Vermont and Buffalo. Right now he is seeing about 300 visitors a month to his salt cave for a 50-minute session that costs $35. He would like to see that number grow to 500 or more.

Paris Martin has worked the front desk since the doors opened and has interacted with most of the customers. She also uses the salt den and other services to help her deal with asthma and allergies.

“When I go in the cave I feel my airways open and it helps increase my lung capacity,” she said. “And it’s nice to not have to go home and use my inhaler.”

Duff is hoping to grow the business and eventually start counseling for vets coming back from deployment. He tipped his hat to the Arsenal, and the U.S. Small Business Administration Veterans Outreach Center, for helping him fulfill his dream and for his most recent award.

“We really wanted to commend these American heroes, recognize and showcase their businesses as examples for other veterans of what is possible and how VBOC and the Arsenal Partnership can help,” said Peter Gannon, president of the Arsenal Business and Technology Partnership.