TROY — For a place where many movies have historically been filmed at, the city of Troy strangely lacks a proper movie theater for locals to enjoy.

The city’s Planning Commission recommended to Bonacio Construction and the development team behind the potential Bow Tie Cinemas that could open in Troy in 2018, that they should genuinely consider local residents’ concerns, and possibly revise its overall design. This meeting was the first item on the agenda at Troy’s City Hall at 6 p.m. on Wednesday, July 26, even going on to last for almost two hours.

Renderings of the cinema were presented, depicted from various angles and in both day and nighttime. Some 10,000 people a week are expected to visit and there will be only roughly 105 parking spaces—this became a recurring concern among residents. The complex will be handicap-friendly, its transparent lobby would be 35 feet and contain 11 movie screens within. Its design is mainly borrowed from the Bow Tie Criterion Cinemas at Saratoga Springs.

“It’d be the catalyst for so many things and we’re talking to the Bow Tie guys right now about launching this thing up along with a film festival in Troy very soon,” he said. “We’ve come to the point where we want people to come to Troy for a weekend—like go to the Farmer’s Market on Saturday, catch a movie, have a dinner at one of many amazing restaurants—and just have an unbelievable walk through the City of Troy.”

The main concerns that attending residents had were that the cinema’s design looks far too modern (as compared to the Victorian style downtown Troy is known for), that it blocks the view of the Hudson River and does not come with adequate parking. Other issues raised was that its logos and signage would cause light pollution, that the cinema’s back side (which is simply a blank wall that faces the Hudson) looks ugly, and that its intended location on 1 Monument Square is not ideal.

“The building is beautiful but my biggest concern, however, is it doesn’t keep

with the architectural flavor of the city of Troy,” said resident Katherine Munson. “I just would like to see the exterior look more like the rest of Troy.”

Fellow resident and movie enthusiast, Matthew Sekelick, similarly echoed her sentiment, “I believe in architecture, I believe it has a huge impact on the character of our city.”

While he acknowledged that Bow Tie Cinemas and Bonacio Construction may want to maximize their profits with this cinema, they “need to be investing in the City of Troy too” and the 1 Monument Square site deserves a worthy building that satisfies locals.

Notably, he said he rents a place at a historical-looking building and he personally disliked how his view is of the back of the Troy Atrium which is windowless and plain to him. Hence, his own personal experience with how architecture personally affects someone was a focal point in his argument.

Tim Taney, owner of Slidin’ Dirty, countered the architecture-concerned residents, “The moment we allow architecture, building materials and parking lots to define our city’s character is the moment we’ve lost all the character altogether.”

The general consensus was that there should be a financially feasible way to edit the cinema’s design but resident and artist Michael Lopez said, “I’ve heard a lot about money tonight but I haven’t heard about our heritage,” particularly plunging the entire room into reflective silence.

He brought up how not a single individual had concerns for the Hudson River before him and he wanted the cinema to be designed around it, 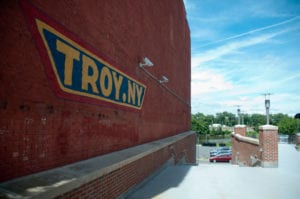 perceiving the current design as a “barricade” and “a lot of blankness.” Claiming that architecture does speak to who the people of Troy are, he wanted an improved design of the cinema’s back side so that it complements the Hudson and even encourages locals to visit and gaze leisurely at the waters.

As a possible remedy to the locals’ woes, the development team proposed it could feature movie posters or even sculptures there to give some flavor, even showing an artistic rendering which was received with a few approving nods.

Barbara Nelson, lead architect of the Breathing Lights at the Capital Region, suggested an alternate design, even handing out several copies, where the cinema would be elevated, the street level would have several storefronts and contain 70 more parking spaces—this could double as space for a flea market or parties. She argued that it would give people more reasons to visit the area and also appreciate the Hudson behind it.

However, the residents generally believed that a cinema would benefit the city’s economy and tourism, being an inviting option for people from outside Troy to come visit. This could lead to boosting business in local neighboring stores or restaurants. Additionally, the residents want something meaningful to occupy the area that had once housed the old City Hall, having been torn down back in 2011.

“Troy has a feel that’s somewhat intangible but it has that feel because of very tangible things, one of which is the architecture,” said resident Kevin Carpenter. “The back [wall] could have a nod to [Troy’s] maritime history. I do sort of disagree with some of the earlier comments that Troy’s not about the architecture, I mean I moved here because of how Troy feels.”

Other residents suggested a possible rooftop garden, patio, a more inviting back walkway to the Hudson, fewer than nine screens (deeming that the proposed 11 takes up too much valuable space) and even a more “viable” location for the cinema to be built.

Resident and business student Donna Su acknowledged that it is indeed hard to please everybody with such a huge project like the cinema but the modern design would have fared better in Saratoga Springs, Clifton Park and Albany, instead of Troy. She suggested that the development and construction teams could hold an online poll for residents to give their opinions to better inspire the design but not necessarily telling the architects directly what to do.

“Maybe each theater room could give honor to something very specific that’s historical and meaningful to the residents of Troy or maybe naming a room, [it’s just] rethinking how you’re presenting this to the citizens,” she said to the attending representatives of Bonacio Construction and Bow Tie Cinemas. “I feel like you’re not putting [the citizens] well into your thoughts much and that’s why people have to come out here and say that their voices aren’t being heard.”

After roughly 20 residents individually spoke up, the Planning Commission convened and advised the representatives to at least consider how the public felt and maybe adjust its design. They plan to meet again at a future date to continue discussing the proposal and eventually either approve or reject it altogether.

“We need to embrace opportunity and not discourage it,” Vic Christopher memorably said who himself recognized how people will always have different opinions. He has said that new hotels could also appear in Troy soon, citing recent renovations downtown, to help draw people into the area.

Current Bow Tie Cinemas around the Capital Region are located at Saratoga Springs, Wilton Mall and Schenectady. Judging from how passionate the public was about Troy’s proposal and how confident they were in how a cinema can rejuvenate the city’s economy, a fourth one could exist as early as next year.

But its controversial design and location still hinders its ability to be approved, both by the Planning Commission and residents.