100 years ago, the New York National Guard reported for duty to fight in WW I 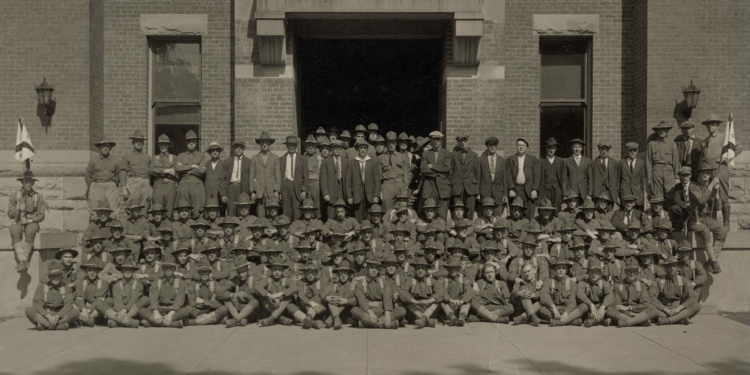 New York National Guard Soldiers assigned to Company G, 1st New York State Infantry gather outside their armory in Oneonta sometime in July, 1917 following their mobilization for duty in World War I. The men not in uniform were new recruits. On July 15, 1917 more than 24,000 New York National Guard Soldiers reported for duty and began the process of heading to Franch to fight the Germans. ( Photo courtesy of New York State Military History Museum)

One hundred years ago this month, 24,000 members of the New York National Guard began reporting for duty for what was then known as the World War.

On July 12, President Woodrow Wilson ordered all 112,000 National Guard soldiers across the country to report for duty as part of the National Army, which was being built to fight the Germans in France.

The U.S. had declared war on Imperial German and Austria-Hungary on April 6, and the time had come to send an Army to France to fight.

The first step was to mobilize the Army’s main reserve, which was the National Guard. Wilson’s order specified National Guard soldiers begin reporting between July 12 and July 25.

New York’s troops, along with those in Pennsylvania, Ohio, West Virginia, Michigan, Wisconsin, Minnesota, Iowa, North Dakota, South Dakota and Nebraska were instructed to report on July 15. The soldiers reported to their respective armories and were preparing to ship out.

Nearly 17,000 New York National Guard Soldiers had been on duty along the Mexican border to prevent incursions from troops of the Revolutionary Gen. Panco Villa during 1916, and some of them just returned to New York in the spring.

The bulk of New York’s troops were organized as the 6th Division which would be changed to the 27th Division on July 27.

The 69th Infantry Regiment would be renamed the 165th Infantry and fight as part of the 42nd Infantry Division, which was made up of National Guard troops from around the country.

The 15th New York Infantry, an African American regiment, would fight on its own under French command and become famous as the 369th Infantry Regiment, the “Harlem Hell Fighters.”

New York’s 1st Aero Company, which had conducted the first long distance American Military aviation flight in 1916, did not go to war as a unit, but its members all served in the new U.S. Army Air Service.

On Aug. 5, all New York National Guard soldiers became members of the U.S. Army. At the end of the month, members of the 27th Division began leaving New York for Camp Wadsworth, in Spartanburg, SC where they would continue training.

More than 400,000 New Yorkers served in the military during World War I, more than any other state.

SPOTTED: Saintseneca and The Sea The Sea at Rockin’ on the River