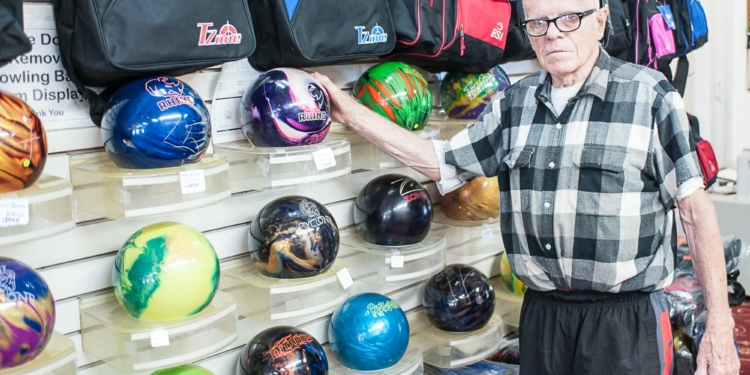 COLONIE — For 60 years, if you needed gear for bowling, billiards, darts or poker, there was only one place to go in the Capital District: Bob Daubney’s.

It was in 1957 when Daubney opened his first store on North Pearl Street in Albany, shortly after he realized he was a good bowler, but not good enough to make a living off the sport, or off playing billiards or from poker – though he did once win $27,000 at a high-low poker tournament in Las Vegas.

“If you bowled well and had a certain way of bowling you might cash and make some money but that wasn’t the case with me,” he said. I wasn’t that good and I knew so I decided to get in the bowling business and it’s so far treated me pretty well.

Back some 60 years ago, to qualify for the Professional Bowlers Association tour you not only had to have a 190 average in two leagues, but were also required to compete in at least two tournaments a year. At the time his average was around a 193, good enough to qualify but not good enough to make a living rolling the ball, so he decided to drill holes for other players and sell bowling equipment.

That said, he still has more perfect 300-games than he can remember with his first coming in 1958 and the last, when he got 17 strikes in a row, coming 10 years ago.

The same can be said for billiards, where his record was 186 balls in a row on a professional, 4.5-foot by 9-foot table. The best at the time, Willie Masconi, had a record of 485 balls in a row. Again, Daubney was good, but not good enough to make a living at it, so in the 1960s, at a shop on Broadway in Albany, he started making pool tables. There is a photo of one table hanging in his shop with a 1961 Triumph sitting on top of it to show the people how strong his tables were.

In 1985 he bought the 50-lane Bowler’s Club on Route 7 in Latham from the late Morris Cramer, who was a central figure on the local and national bowling scene.

That endeavor was short lived, though, because of Cramer’s financial issues, Daubney said, so he opened a retail shop on Route 9 where he sold his wares until 2012 when he moved south. His current shop is located on Route 2 just west of the Latham Circle next door to Spare Time Bowling Lanes where Daubney still gives bowling lessons.

“He has been a mainstay,” said Carol Judge, the general manager at Spare

Time and the executive director of the Northeast Bowling Proprietors’ Association, who has known Daubney since she first entered the industry as a 16-year-old in 1968. “He has been a steadfast contributor to the game, he still gives lessons and he still participates in every single part of the game, even at his age.”

For the past 13 years, she said, Daubney has sponsored the Huck Finn scholarships that are distributed during the weekly Huck Finn’s Capital Region Bowling Show.

While the two have known each other for decades, they differ on the status of bowling and its future.

Daubney believes the sport has changed so much — with high powered balls and changes in how the lanes are oiled — that it has put itself in jeopardy.

“In the old days, when I was a kid, you had to learn how to throw a hook. Now you can buy a hook in a ball right out of the box,” he said pointing to a wall of bowling balls.

There are also fewer juniors showing an interest in the game, and fewer adults participating in league play – which, he said, is the staple of any bowling center’s livelihood — so more lanes are closing and the sport’s future is in very real jeopardy.

“There is too much gambling going on and you can see it by the new casino in Schenectady and too many other things for people to do,” he said. “And, there are fewer and fewer juniors. We used to have 250 juniors in our league and you just don’t see that anymore.”

Judge, though, said bowling is still the top recreational activity in the country. The focus, she said, has changed a bit from the competitiveness of weekly league play to an activity more recreational in nature.

“People bowl less frequently but there are more people bowling,” she said.

Daubney said retail has gotten harder over the years — his new shop is half the size of his shop on Route 9 — with more and more people buying online but a website can’t offer the expertise of 60 years’ experience.

“I turned out to be, over everything else, over poker and bowling and billiards, a better businessman. I’ve been through recessions and bankruptcies and I’m still on my feet,” he said. “I’m still here seven days a week and people come from all over for the expertise I can give them.

“Not many people can say they made a living off of what they enjoy doing. I’ve had a great career, really.”