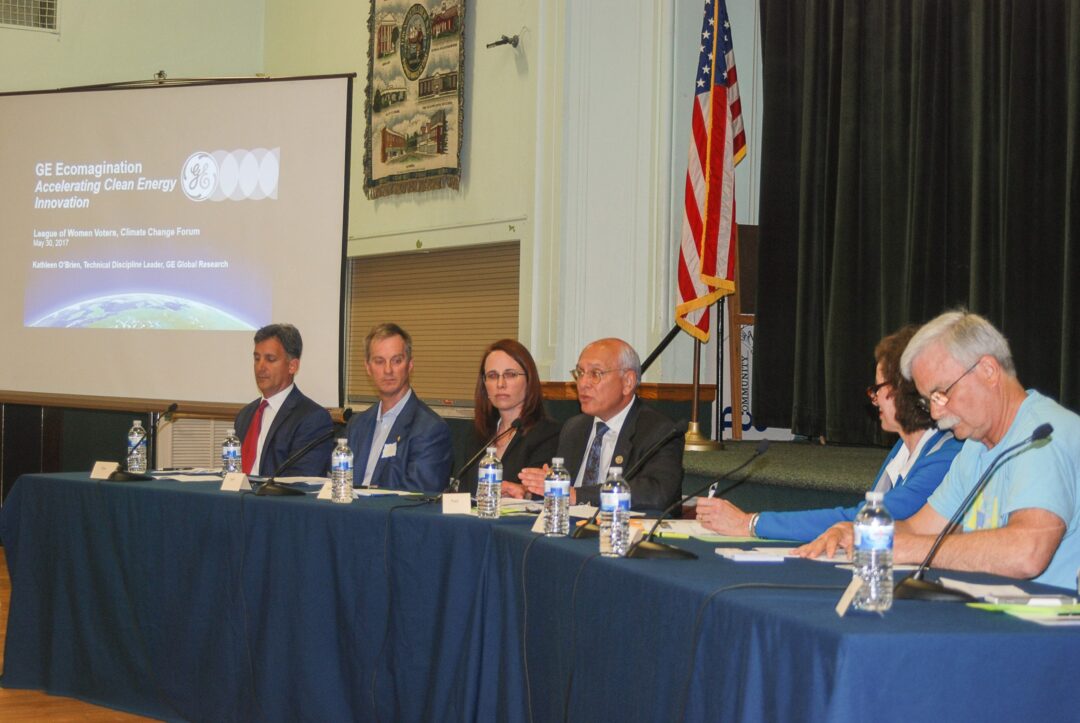 DELMAR — The day before President Donald Trump officially announced the withdrawal of the United States from the Paris Climate Accord agreements, the League of Women Voters of Albany County (LWVAC) hosted a panel discussion about climate change at Bethlehem Town Hall.

LWVAC said the focus of the May 31 panel was to, “move forward to focus on the exciting new innovations currently happening in the field of environmental conservation and to explore new opportunities in business and science in addressing climate change.”

Rumors of Trump’s impending announcement, however, turned much of the talk to the federal action and what that means for states and local municipalities.

Six speakers sat on the panel: U.S. Rep. Paul Tonko (D-20), who serves on the Energy and Commerce Committee and the Subcommittee on Research and Technology in the federal House of Representatives; Dr. Kathleen O’Brien, from General Electric’s Global Research Center in Niskayuna; Dr. Jeffrey Corbin, associate professor of Biological Sciences at Union College; Constantine Kontogiannis, principal engineer and president of Odyssey Energy Solutions in Delmar; Bill Reinhardt, a former Town Board member currently serving on the Albany County Legislature and director of Solarize Albany County; and state Assemblywoman Pat Fahy (D-109), who serves on the Assembly’s Environmental Conservation Committee.

“The case for acting on climate is undeniable,” said Tonko. “There are so many economic and national security reasons to act. But, I ask the skeptics that I come across: even if you do not share my alarm or that of the environmental community, why not support policies that are going to clean up our air while growing jobs in the United States? ”

Noting that the planet has broken global climate temperature records every year since 2014, Tonko continued, “Despite what President Trump and many congressional Republicans would have the American people believe, it is not a choice between growing the economy and addressing climate change. For the third consecutive year, global GDP is up by some 3.1 percent while carbon dioxide emissions have remained flat, if not reduced.”

Pointing out that the Paris Climate Accord has been joined by more than 140 nations and ratified by more than 100 (leaving the U.S., Syria and Nicaragua — the latter actually wanted a greater commitment — the only outliers), Tonko said, “Retreating from the global climate effort would damage [the] United States’ economic competitiveness and hurt our international reputation. Other countries are positioning themselves to lead the climate energy transition and to dominate clean energy markets.”

General Electric (GE) has spent approximately $20 billion on clean energy research and development since 2005, said O’Brien, “and we have succeeded in creating $170 billion in revenue.” Part of the company’s research, she noted, is not simply focused on reducing GE’s immediate carbon footprint, but also that of the products it creates.

Digitization and the interconnectivity of the growing number of smartphones and other devices, she said, are closely interwoven with that research. “We’re really just starting to look at this, but we’re seeing along the lines of $80 billion in cost-savings to businesses and avoidance of 820 megatons of carbon dioxide emissions per year — just by making our devices smarter and able to talk to each other.”

Noting that gas and oil prices are relatively low, O’Brien said, “We’re actually seeing that wind and solar are cost-competitive today, even with that really low cost of oil and gas. We can pull a ton of shale oil out of the ground, but we can still make wind and solar, and deliver that power to our customer at a competitive cost. This is not a science experiment anymore.”

Last year, according to O’Brien, half of new power-generating plants were built for renewable energies. GE expects that number will climb to 75 percent within five years.

Likening the day’s headlines about Trump’s expected abandonment of the global climate agreement to a punch in the stomach, Corbin said he was more concerned with other steps taken by Trump to undo climate protections put in place by his predecessor, which set goals for reducing carbon pollution and protecting public health, as well as intentions announced by new EPA Administrator Scott Pruitt to revisit vehicle emission standards. “The real damage is what they’re actually doing with the policies,” he said.

“Clearly, there are really strong opportunities across the job market,” said Corbin. “I found out today that solar and wind energy jobs are growing 12 times faster than the economy as a whole. Companies, too, are hiring at a rapid pace to address issues of sustainability, not just because it’s the right thing to do, but because they realize it makes economic sense to bring their own costs down.”

While Kontogiannis heralded the advances in solar and wind energy that have made them more affordable, he explained that retrofitting commercial buildings to make them more energy efficient can have a far greater return on investment. “A displaced megawatt is always cheaper than a new megawatt,” he said. “And there’s so much possibility in this state and in this region.”

“We’re just not doing enough,” Fahy said of state government. “And part of it is that we just don’t have enough folks who care about this.”

“If Washington was functional,” said Reinhardt. “You would have Republicans, and Democrats like Paul [Tonko], who would be saying, ‘Okay. We all agree that climate change is real. Now, what are the right policies to get that done?’ That’s where we should be. And, unfortunately, that’s where most of the world is.

“We’re stuck in this situation where we can’t even reach a consensus that this is a problem,” he said. “And I just really have trouble understanding why that doesn’t resonate more with people.”

Town Board member and the Democratic candidate for Town Supervisor David VanLuven also attended the panel, and said, “I particularly liked the emphasis on practical steps that communities can take to reduce our energy use.  It doesn’t matter whether people are motivated by climate change or reducing expenses… everyone benefits from energy efficiency and modern energy sources.

“I want to see Bethlehem continue to improve the town’s energy efficiency and increase our use of renewable energy,” he said. “We were recently designated a Clean Energy Community by the state, so we now have access to more state funds to advance this effort. We also need to continue thinking about how changing weather could affect our town facilities and residents.  For example, as the Hudson floods more frequently, what steps can we take to ensure the treatment plant, well field, and Henry Hudson Park are resilient?”

While Republican candidate for Town Supervisor Gary Fish was out of town on the day of the panel, he later said that he believes climate change is an issue that ought to be addressed by local governments, even if he’s not convinced that climate change is man-made. He supports Trump’s decision to withdraw from the Paris Climate Accord, however.

“I just don’t think, at this point, that it’s really beneficial in terms of jobs and the money being spent,” he said. “I mean, we’re putting out a lot of taxpayer money and China isn’t paying anything.

While Fish said he isn’t convinced that fully 98 percent of climate scientists agree that human actions have led to global warming, he said, “I think it’s a good idea to look at all forms of energy, including renewable, and investigate any steps to make it viable for the town.”