For the ‘Burgh: A councilman and a musician save a summer concert series in Lansingburgh 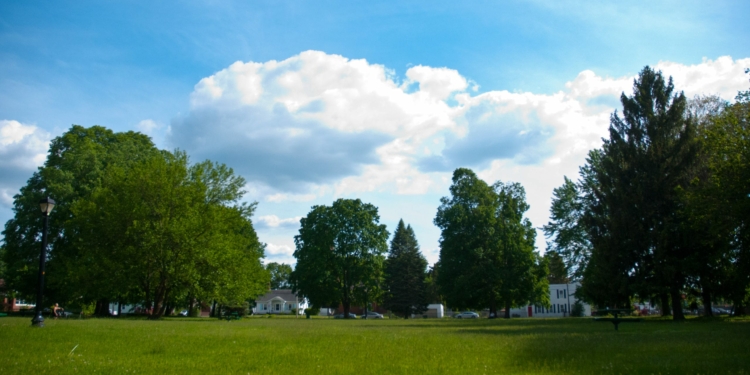 Powers Park, a 2.5-acre ornamental park, is a touchstone to a neighborhood’s proud past. It also continues to be the heart of a community which gathers to it each summer for the concert series that bares its name. (Photo by Michael Hallisey / TheSpot518)

LANSINGBURGH — “For too long we have kicked the can down the road,” stated Troy Mayor Patrick Madden (D), announcing his 2017 budget last October, his first since winning the mayoral race in November 2015, proposing a then 28 percent tax hike. “We have based [previous] budgets on hopes rather than facts. We did so to avoid hard decisions. When those numbers failed to materialize, we were forced to dip into our reserves. They are effectively gone. There is no more road left to kick the can down. It is time for us to face reality.”

By the time the city budget was ultimately passed, Madden’s inadvertent reference to a childhood game of tag was all too poignant as the City closed public pools, and canceled youth programs and slashed municipal jobs

The cuts shaved approximately $130,000 from the initial proposal, softening the burden of city residents who are now paying approximately 14.5 percent more than they did in 2016. Nonetheless, the prospect of losing two public pools, each of which more than 200 kids attend every day, leaves city residents wondering how to entertain their children during the summer. To worsen the blow, families in Lansingburgh who have walked to Powers Park with lawn chairs and coolers in hand for their annual concert series, learned that was gone, too.

There was a time in which Lansingburgh was considered one of the best neighborhoods in the Collar City. Victorian Age homes on tree-lined avenues between Powers and Knickerbacker hint of more affluent times, not too far from when author Herman Melville penned his first few novels, or when President Chester A. Arthur called it home. As downtown Troy receives attention from real estate investors looking to take advantage of a resurgence in urban living, neighborhoods like Lansingburgh have all but been forgotten. Shortly after the budget was first proposed last October, Lansingburgh’s city councilman took to social media.

“It’s frustrating and disheartening,” stated Troy Councilman Jim Gulli (R-Lansingburgh). “Our over taxed residents are having a hard time now meeting their bills every month. I can not imagine how an increase like the one proposed would affect our residents.”

Vito Ciccarelli has earned a name for himself in the area’s music scene. As Troy’s Special Event Coordinator, he was the one calling local musicians to gather entertainment for every city event. Not only that, he’s known to slip local acts into the playlist on his radio show with WVCR 88.3 FM. Though the city position was just a part-time job, it was common to see him walking around as an ambassador of Troy. A long-time resident of the ‘burgh, himself, he said he was most proud of the Powers Park concert series he started in 2004. It was common to see him walking around the stage, snapping pictures of the bands to later post on social media. In the eyes of people in the crowd, he was practically mayor. But, last December, his job was cut from the budget.

“He was the brains behind Powers Park, ChowderFest and River Street Fest,” said Joe Mele, Troy resident and noted staple to the local music scene. “He did all that stuff for years. He’s a good friend. For years and years and years. And, [the City] just pulled the rug out from under him.”

Mele has lived in Troy his whole life. The ‘burgh was a place to hang out with friends. He and Ciccarelli have a friendship that dates back before the Collar City Bridge’s silvery facade first gleamed in the sun. (Replacing the Troy-Green Island Bridge that shot steel rivets across the city before falling into the river in 1977.) Mele learned about his friend, and soon later, learned the fate of his beloved concert series.

“Lansingburgh is on a downswing, and these Saturday events [bring in] 3, 4, 5,000 people at times,” said Mele. “It’s a great thing. So, when this thing crashed and burned… I was doing stuff online, and this one guy — who always suckers me — was complaining, ‘We don’t have money for SPAC. This is our SPAC. I take my mother every Saturday, and sit under a tree in a lawn chair.’ And, that’s exactly what it is. People come out and sit under a tree in lawn chairs, and we entertain them.”

Mele said he approached city councilmembers with the idea of funding the Powers Park concert series without municipal money. He shared his experience with organizing fundraisers. Each year, he raises funds for local charities in memory of his son, Dustin. He said councilmembers appeared impressed with his idea, but after weeks of going “back and forth,” the prospect of bringing the shows back to Powers Park seemed unlikely. Then he was approached by Gulli.

“[The City Council]  just dropped the ball on me,” said Mele. “I just tried my best. And, about, probably a month and a half ago councilmember Jim Gulli called me. And, he said, are you still interested in doing this?”

Mele had initially offered to present some of his own money to the cause, but, with having been left with little promise from the City to take his offer, Mele’s money went elsewhere. Gulli asked if the two of them could raise the money together. Assessing the price of resources to host the series for the summer, including renting port-a-potties, insurance premiums, paying the bands and sound equipment, the price tag stood at $12,000.

“I didn’t know anything about port-a-potties, so that’s what Jim was handling,” said Mele.

So, Mele and Gulley split up as a team. Gulley handled gathering the logistical resources, was able to obtain insurance at a discounted rate through the City, and obtained corporate sponsors. Mele gathered additional donations, and reached out to musicians. By his own estimate, Mele has been in the local music scene for 50 years. “They’re all friends of mine,” he said. Many of whom take part in his annual Dustin Mele Memorial Concert. “There are bands who have played [Powers Park] for $1,000, and they did it for me for $600.

“Everybody was into this idea of trying to help.”

Mele secured a line-up. Gulli gathered the funds. Now, as May rolls into June, the public pools may not be expected to open this summer, but there will be concerts in Powers Park starting in July.

“I think it’s great, what Jim Gulli did, for picking the ball up,” said Ciccarelli. “I put my heart and soul into Powers Park, and it was something I loved. … This is important to the community.”