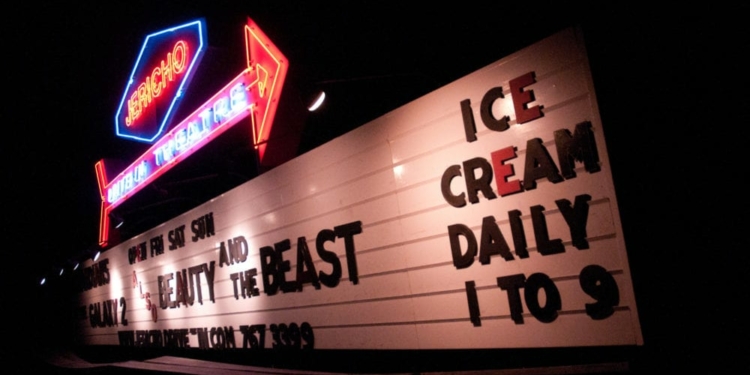 The lights of Jericho Drive-in’s marquee cut through the night to let people know it is open for business. (Photo by Mike Hallisey)

GLENMONT— 1957: The Yankees’ Mickey Mantle was the crowned king of baseball, Sputnik streaked across the skies and Elvis’ seductive hips were kept hidden from television audiences. It was also the first year motorists parked their cars on a grassy field in the rural farming community of Bethlehem to catch a movie at the Jericho Drive-in.

Today, drive-in theatres conjure images of poodle skirts, hula hoops, crew cuts and Ford Fairlanes. A time period romanticized and adored by later generations who fell in love with “Grease” and “Back to the Future.” A Golden Age devoid of war, and a new kind of music capturing the imagination of American teenagers. The ‘50s have often been described as magical. And, perhaps that’s what draws people to them still, in 2017.

“You know summer has officially arrived when you plan a trip to the Jericho Drive-in,” said Louise Lennon, of Albany. “[It was] a little trip down memory lane when I took my kids there. Those speakers hanging off the side of the car. Those food ads that made you want to run to the concession stand at intermission. Sitting in your beach chair outside the car, under the stars. Priceless.”

For Mike and Lisa Chenette, going to movies was their thing to do. While the two were just dating, Mike said they would go on three or four movie dates a week. It was, “kind of our thing,” he said. Their thing turned into a vocation when Mike bought the Jericho Drive-in 1995. Got married. Had a baby. Their baby daughter spent many a time at the concession stand. Now 17, she works it.

In their heyday, it is estimated that more than 4,000 drive-in theaters cropped

up throughout rural America in the late ‘50s and early ‘60s. According to newyorkstatedriveins.com, there was as many as 155 theaters in 1972, nearly a dozen of which stood in and around the Capital District.

Albano’s Drive-in was a 600-car capacity theater in Ravena when it opened in July of 1956. It closed after six seasons, and stood close to the Ravena-Coeymans-Selkirk High School campus. Carman Drive-in was built in October 1949, and boasted a 300-car capacity before it was demolished in 1984. That was a year after another Guilderland theater, the Turnpike, closed after more than 30 years in business. In Voorheesville, Don Hallenbach erected the Indian Ladder Drive-in off Route 85a in 1949. The marquee for which stood long after the screen succumbed to high winds in 1975. Before opening the Mohawk Drive-in in 1946 and Latham Drive-in in 1970, Simon Fabian and Neil Hellman opened a 460-car theatre just north of the Latham Circle. Though it stood well south of the Mohawk River, they called it the Saratoga Drive-in until it was demolished in 1971. Menands had at least two drive-in theatres, but not at the same time. The Menands Drive-in was said to be able to hold more than 400 cars when it opened in 1949 at 431 Broadway. It closed in 1965. Tri City would open the next year at 236 Broadway, boasting a capacity of 1,500 cars before it closed in 1990.

The popularity of drive-ins declined rapidly in the ‘70s and into the ‘80s, coinciding with the growing popularity of cable television and the VCR. Families could choose a movie, and view it within the comfort of their living room. As of 2010, only 28 drive-in theaters remain. The Jericho Drive-in is the only one remaining in Albany County.

Glenmont’s bastion of nostalgia continues to remain popular, but it has had it’s battles to face. Also celebrating a milestone is the Chenette’s ice cream stand. The couple forfeited a portion of the drive-in’s yard to place a soft ice cream stand at the entrance facing Route 9W. It often opens in late March, before the movies start. It has helped with the theater’s continued success. However, the advent of entertainment technology hit closer to home nearly five years ago, when Hollywood started phasing out 35mm reels of film to utilize digital format. The movement forced remaining drive-ins to scramble for digital projectors, some of which costing $70,000 to $100,000.

“That caused many of them around here to shut down,” said Mike. “The price of one could force you into a 30-year loan. We weren’t about to do that.”

In 2013, the Chenettes placed competed for a new digital projection machine through Honda Motor Company. They didn’t win. Later, they attempting an online crowdsourcing initiative, but didn’t reach their goal.

The Chenettes found their movie options limited as popular first-run movies started going to digital exclusively. The couple feared they would have to shorten the season, or forgo double features.

In 2015, the couple was able to find a refurbished machine at a discounted

price, but still needed the funds. So, the tried selling a limited number of season passes for $200. Ticket holders would receive admission to a movie, along with a free large soda with the purchase of a large popcorn. And, the people responded.

“We thought the passes would be a fun idea,” said Lisa, in 2015. “We have some people who come to the drive-in every weekend we’re open, so we thought those would be the customers who would be the most interested.”

Today, the Chenettes have their digital projector, and continue to run double-features.

Nostalgia, freedom of the outdoors and low prices are often what draws families back to drive ins today; whether it allows parents to let their kids roam free on the grounds as they cuddle, or simply a way to get out of the house.

“Reminds me of the old days when I was a kid with my parents,” said Melissa Signorelli, of Wynantskill.

As the Chenettes prepare to open another evening of movies, the two reminisce over a memory developed early on in their 22-year career as theater owners — an impromptu display of interaction between movie and movie-goers.

“There was pouring rain and the wind was blowing,” said Mike. “There was thunder and lightning. And, we were playing ‘Twister’ that night. “We had customers walking into the concession stand laughing and giggling, saying it was just like being in the movie. [Laughs.] The weather was so terrible that night.”

The magic of the drive-in continues to capture younger audiences who come in with their parents. But, the Chenettes can see that the teenagers and college kids are missing from the crowds. There is competition with smartphones and streaming content. To grab their attention, Lisa hits social media. Still, the families with young kids continue to flock. The Chenettes hope that those kids grow-up, have kids, and remember to come back with each generation. With Hollywood magic, anything is possible.

“My kids absolutely love the drive in,” said Monica Mallory, of Glenmont. “And, as a mom that likes to bargain shop, [the] two for one [price] is great!”