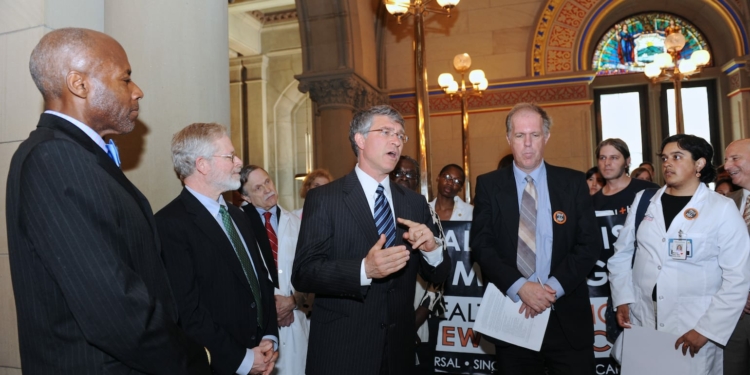 NEW YORK STATE — A plan to create a universal single-payer health insurance plan in New York state passed the Assembly on Tuesday, May 16, on the birthday of Health Committee Chairman Richard Gottfried (D-75), the bill’s sponsor and the Assembly’s most senior representative.

The legislation, which passed with a vote of 87 to 38, has been advocated by Gottfried for years and just cleared the Assembly for the third consecutive year, having been kiboshed by the Republican-controlled Senate in 2015 and 2016. Prior to that, a universal health care bill hasn’t made it to the Assembly floor since 1992, when it also passed with a solid majority.

“But then,” said Gottfried, “the focus of reform shifted to Washington. While the federal Affordable Care Act has done a lot of good, it’s clear that a lot of problems remain – and if we want to fix them, we have to do it ourselves.”

The New York Health Act would establish a universal health care system within the state, known as New York Health, and expand coverage eligibility to include all residents, regardless of wealth, income, age or pre-existing condition. In addition, every enrollee would have access to the full range of doctors and service providers offered. The plan would provide comprehensive inpatient and outpatient care, primary and preventive care, maternity care, prescription drug costs, laboratory testing, rehabilitative care and dental, vision and hearing care.

State funding would be combined with federal funds that are currently received for Medicare, Medicaid and Child Health Plus to create the New York Health Trust Fund. The state would also seek federal waivers that will allow New York to completely fold those programs into New York Health. The local share of Medicaid funding would be ended, offering major property tax relief for New Yorkers.

According to an analysis by University of Massachusetts/Amherst Economics Department Chair Gerald Friedman, 98 percent of New Yorkers would spend less for health coverage and health care under New York Health than they do today. New York would save over $70 billion by: eliminating health insurance company administration and profit; reducing health care provider and employer administrative costs; and capturing savings from negotiating prices of pharmaceuticals and medical devices. Even after expanding coverage to all New Yorkers; eliminating deductibles, co-pays, and out-of-network charges; and increasing low Medicaid reimbursements, the analysis estimates New York Health would generate net savings of $45 billion.

Additionally, employer spending on health care currently eats up a median 12.8 percent of payroll costs on health insurance, up more than 50 percent in a decade, with small businesses spending even higher percentages. According to the Friedman study, New York Health could be funded through an income assessment averaging just 8.1 percent of payroll.

Assemblymember Phil Steck (D-110) co-sponsor of the bill — A.4738 — and another longtime advocate for a single-payer health system, said, “Far too many people have to forgo lifesaving treatment because they don’t have insurance, their insurance won’t cover it or the costs are too high, and now we have a federal administration that seems hell-bent on making the situation worse. But here in New York, we know that’s not right – we fight hard for equality and health should not be the exception to the rule. Everyone, no matter their age, gender, race or net worth, should have access to health care.”

Steck, who also co-sponsored the same legislation in 2015 and 2016, said recent events have made it all the more urgent. With children born with pre-existing conditions at risk of losing coverage and mothers facing astronomical costs associated with giving birth, the situation has become dire, he said, noting that the repeal of the Affordable Care Act could leave as many as 2.7 million New Yorkers without health insurance coverage.

“Without good health, everything else is moot,” said Steck. “It’s our responsibility to step up and lead the way because our health and the health of our children, friends, family and neighbors are in imminent danger.”  Steck pointed out that single-payer is a plan under which everyone gets health insurance coverage. It is not a means-tested plain like Medicaid in which people pay taxes for benefits they do not receive.

“New Yorkers deserve better,” Gottfried said. “We should be able to go to the doctor when we need to, without worrying whether we can afford it. We should choose our doctors and hospitals without worrying about network restrictions. We deserve health coverage for all of us, paid for based on our ability to pay, not what the market will bear.”

Gottfried and Steck will hold a town hall to discuss health care with constituents on Tuesday, June 6, from 6 – 8 p.m. at the Colonie Town Library at 629 Albany Shaker Road in Albany.

“The New York Health Act removes financial barriers to health care – the co-pays and deductibles – that keep some of my patients from seeing me when they need to,” said Oliver Fein, MD, Chair of Physicians for a National Health Program-NY Metro. “I also wouldn’t have to worry about my patients affording the medications, lab tests or consultations that they need. I wouldn’t have to waste countless hours fighting insurance companies to approve necessary medical care. The New York Health Act is a universal, single payer system that would guarantee equal access to care that is funded fairly – something every New Yorker and resident of this country deserves.”

Assemblyman Angelo Santabarbara (D-111) voted against the bill, saying that, while he supports the idea of single-payer, he would feel more comfortable with a plan that was drafted with more knowledge of, and in direct response to, federal actions. He also said he wasn’t convinced of its potential fiscal impacts.