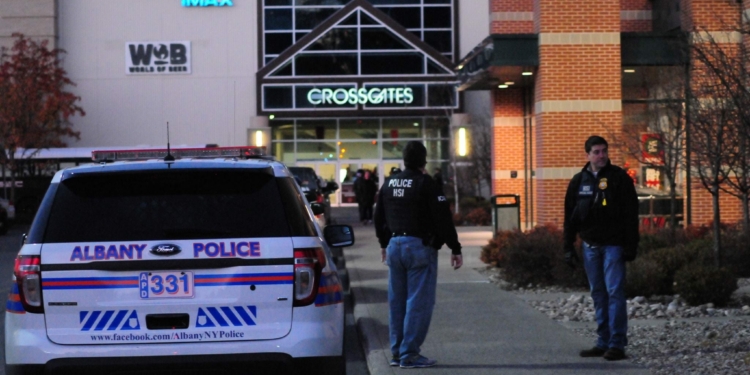 A pair of police officers stands outside the entrance to Dick's Sporting Goods at Crossgates Mall Saturday afternoon after an alleged shooting took place.

ALBANY – A jury convicted 20-year-old Tasheem Maeweather of reckless endangerment but acquitted him of the more serious charges of attempted murder, attempted assault and possession of a weapon.

Maeweather was arrested for firing a gun in a crowded Crossgates Mall on Nov. 12, 2016.

Maeweather’s attorney, Lee Kindlon, called just one witness, an employee at Foot Locker who said he saw a man run by just prior to the shooting who looked suspicious and who was reaching into the waistband of his pants.

He also showed a video of Maeweather doodling with his left hand to counter the testimony of an off duty law enforcement official who said he saw Maeweather with the gun in his right hand.

“Citizens of Albany County should always expect to be safe when visiting public spaces,” District Attorney David Soares said in a statement. “This defendant violated our sense of safety and has left a traumatic and indelible memory for those who were present that day. This incident is also a reminder that illegal guns are a problem for all communities and we must continue to remove them from the hands of people who place their own needs above the rest of ours.”

Maeweather was on felony probation at the time of the Crossgates incident and was being monitored by a GPS ankle bracelet. On Sept. 25, 2015 he was convicted of one count of criminal possession of a controlled substance.

Judge Peter Lynch determined Maeweather violated the terms of his probation and imposed a nine-year sentence for the drug conviction and violation of probation.

When he is sentenced on June 23, he is looking at up to seven years in prison as a predicate felon.