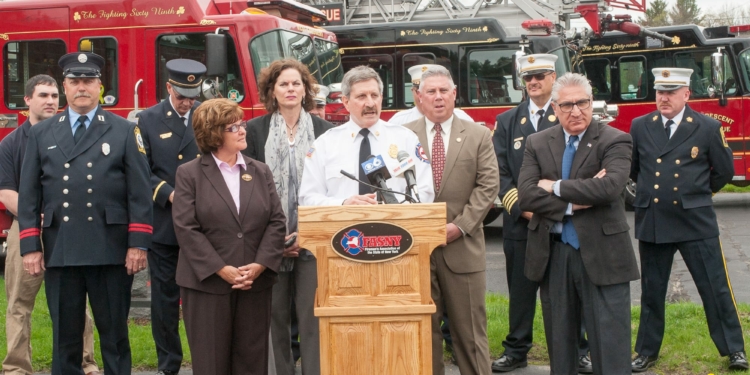 John D’Alessandro, secretary of Firefighters Association of the State of New York, speaks at a press conference (photo by Jim Franco/Spotlight News)

This weekend, during the seventh annual RecruitNY, volunteer fire departments around the state will hold open houses in an effort to recruit new members.

“You can see some really nice apparatus behind us, and inside those doors on those trucks is a lot of pretty cool technology but I have to tell you, at the heart of the fire service is dedicated, trained motivated men and women using those tools and riding in those trucks,” said John D’Alessandro, secretary of Firefighters Association of the State of New York while at the West Crescent Fire Department. “But if we don’t have people, the technology and those trucks don’t have much value.”

Approximately 70 percent, or 1,800, of all fire departments across the state are volunteer. If municipalities had to pay the salary and benefits for the approximately 110,000 volunteers, it would cost about $3.2 billion a year – that equates to a statewide average property tax hike of about 26 percent, D’Alessandro said.

In the mid to late 1990s, he said, there were about 120,000 volunteers, but over the next two decades it decreased to about 80,000. Three reasons were typically given for people not volunteering: Not enough time, “I’m the one running away from dangerous situations not into them” and “I don’t know how to do it.”

Last year, thanks to a federal grant used to spur recruitment, that number jumped to the current 110,000.

“It sounds like we are OK, and people will say we are close to being back where we were,” D’Alessandro said. “But the fact is, over those years, the number of calls and the complexity of those calls has dramatically increased. We do a lot more now than we did 10 or 20 years ago.”

Volunteers don’t just run into burning buildings with hose in tow, they are called on for hazardous material remediation, water rescues, car accidents and EMS calls and answer a host of other calls as well.

There are two sides to that coin, though. A volunteer can take as much training as offered, or he or she could volunteer when time permits and help out with the never ending menial – but none-the-less necessary – tasks like washing trucks or cleaning the fire house.

“Volunteering truly represents the values of the communities,” said Assemblywoman Pat Fahy, D-Albany. “This is about more than firefighting. It’s about training for a host of jobs and it’s also about what they give back. It embodies the term service and being a part of the true fabric of the communities.”

This weekend a number of firehouses will open their doors for prospective recruits and to the community in general. For a complete listing click here.