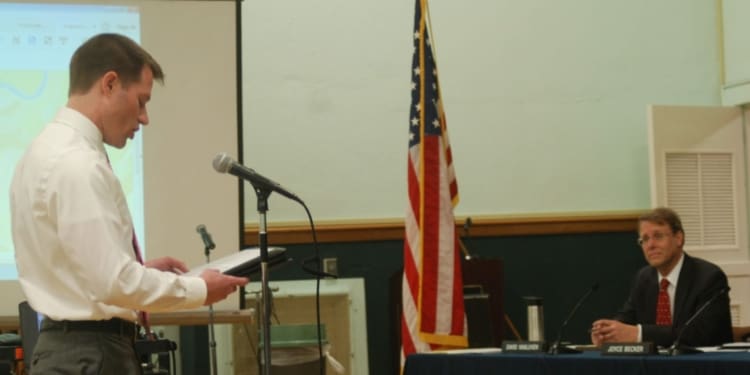 Republican Jim Foster (left) and Town Board member David VanLuven, a Democrat, have yet to be endorsed by their parties and neither has formally announced a bid for the open Town Supervisor seat in Bethlehem, but at the April 12 Town Board meeting, a challenge was undeniably issued // Photos: Ali Hibbs

BETHLEHEM — In a potential preview of the upcoming town elections, two likely candidates for Bethlehem Town Supervisor faced off at the Town Board meeting last night, Wednesday, April 12.

It was the meeting during which Town Assessor Laurie Lambertsen promised to clearly outline procedure for a town wide initiative to “re-collect” data on all residential properties, and update the town’s inventory using updated tools. The move was approved by a 4-1 vote by the board last month, after Lambertsen told board members appraisers would likely ask to enter residents’ homes to confirm information such as square footage and room usage. When Spotlight News ran the story several days later, public reprisal was swift.

Republican Jim Foster, who lost to Supervisor John Clarkson two years ago by a mere 10 votes, was the first of several residents to address board members during the public comment period preceding scheduled agenda items.

“Let me be clear,” said Foster, “I support fair and accurate property inventories and assessments. What I’m against, however, is appraisers performing interior inspections of homes. I’m also against members of this board intentionally misleading the public as to the background of the inventory recollection plan.”

Specifically, Foster targeted board member David VanLuven, widely seen as the likely Democratic candidate to replace Clarkson, who recently announced he will not seek re-election. Foster cited a post by VanLuven on his political Facebook page, Friends of David VanLuven, where VanLuven claimed a Spotlight News article reporting on the re-collection initiative was incorrect and “being used to sow fear and dissent.”

Lamenting what he characterized as “fear mongering,” VanLuven insisted in the post that the purpose of the initiative is to be fair to all town residents, taking inventory and not reassessment for tax purposes. He also said that appraisers would not be asking to enter homes, although Lambertsen repeatedly told board members at the March 22 meeting that was a likelihood.

“It was a miscommunication at the last meeting,” responded VanLuven. “Personally, I apologize for being more focused on trying to be sure that the outcome of the inventory was fair and not focusing on correcting what was and should have been recognized by me as what was an obvious misrepresentation of what the actual plan was.” (VanLuven has also apologized to Spotlight News for erroneously casting aspersions, in an email, claiming, “I was so focused on the implications of the inventory that I didn’t key in on the problems in the presentation of the methodology.”)

“There are assertions I’ve rolled back on what the inventory is because of the public outcry,” he said Wednesday night. “And it saddens me to see the undermining of the faith in our elected officials at the local level that we’re seeing happening at the national level.”

If residents were unable to trust that he was not acting dishonorably by denying existing aspects of legislation he voted for, he said, they had only to “look at the numbers.” The contract with GAR Associates, which has been selected to conduct the appraisals, will cost the town only $10 per property which, according to VanLuven, would make it economically unfeasible to do interior appraisals of every home.

Considering a flurry of internet indignation over the recollection procedure, primarily incited by a conservative Facebook page called Bethlehem Resident News, relatively few residents showed up at the April meeting to express their displeasure. Of the eight residents who spoke on the issue, only two — Foster included — were in opposition. Linda Jasinski, a Conservative who ran for Town Board in 2013, said she was unable to understand how board members could claim they were unaware the initial plan would entail appraisers entering the homes of residents. She cited specific instances when Lambertsen clarified that very fact, saying, “And all but one of you voted for it.”

She commended the board for later clarifying that part of the recollection plan, saying, “. . . because that means you’re listening to the people,” but went on to inform residents that there is a mechanism by which they can opt out of the appraisals altogether and encouraged them to do so.

The six other residents who spoke lamented “fear mongering” that they clearly felt was proliferated by the aforementioned Facebook page, which posted links to the Spotlight story, and others that followed, in posts admonishing residents to: “HOLD ON TO YOUR WALLETS!!!” and characterizing the inventory re-collection measure as an invasion of personal privacy intended to generate more tax revenue for the town. The site, followed by approximately 1,300 Facebook users, has generated a fair amount of attention in recent weeks, presumably becoming more active in the lead-up to an election that will give republicans the chance to regain legislative majority on the five-member board currently without any GOP representation.

Several speakers at the meeting alluded to other individuals and to the upcoming election. Foster, who spoke first, ended his comments by encouraging VanLuven to “to stop letting his ambitions and aspirations for higher town office stand between the people of Bethlehem and the facts to which we are all entitled.”

Resident Emily Saunders said she has no objection to paying a fair amount in property taxes because they pay for town amenities. Expressing gratitude that the board had seemingly addressed the issue of home entries, she added, “I think that it is shameful and juvenile to behave in a way that denigrates the hard work that we do here without being honest about our own ambitions.”

At least three other speakers mentioned the “private agendas” of those perceived as fomenting discord when they spoke in support of the measure.

“I’m going to appeal to my community members,” she said. “Please come out from behind your Facebook pages. If you stand behind what you say, make yourself known and stand by it. If you hear something, contact someone closest to the news and have a conversation — by voice or, better yet, in person. Civic engagement is what is going to serve our community best through these next years. But, to be civil, it needs to be respectful. It needs to be honest and open and it needs to build trust.”

“What I took away from the meeting and David’s comments last night is that the public and media should not rely on proposals publicly made or voted on by the Board to be accurate or representative of what the Board ultimately intends,” said Foster the following morning. “Nor should we expect Mr. VanLuven to correct any inaccuracies he may be aware of during any presentations or discussions by or before the Town Board.”

“The Town Assessor did a good job answering questions at last night’s Town Board meeting,” said VanLuven, not taking the bait. “It was great to hear from so many people — especially when so many had positive things to say.”