by Ali Hibbs
in Culture, News, The Spot
0 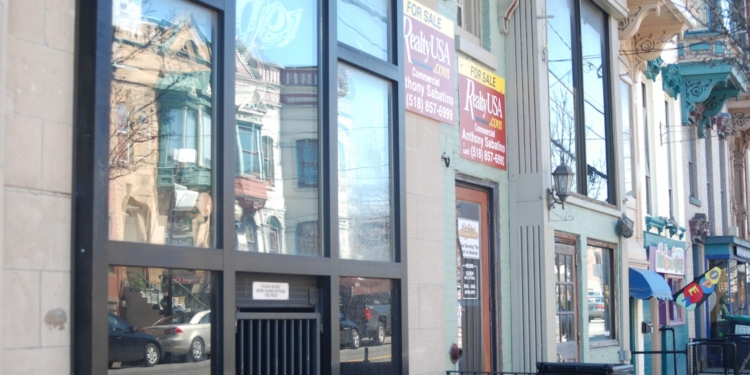 ALBANY — When Ali Celik first looked at purchasing the Lark Street property that was most recently home to DeJohn’s Restaurant and Legends Sport Lounge — more than three years ago — his initial reaction was to pass.

“I said no, just like 100 other people that had looked at it,” he said, explaining that the building has essentially been gutted of anything of value. “I went into the building and I said, ‘No way.’”

Celik, who is a licensed commercial realtor, also co-owns both Mercato’s Pizzeria and Restaurant and Extra Napkin Grill Restaurant on Delaware Avenue in Delmar with his brother and sister. He and his family have been looking for an opportunity to expand into Albany, where Celik said he already has a considerable customer base. The easy commute down Route 443 to the location at 286-288 Lark is one of the reasons that he said he reconsidered the property and whether it might serve his purposes after all.

Ultimately, it wasn’t the condition of the connected buildings that deterred Celik; Instead, it was the hoops through which he would be required to jump in order to realize his mixed-use intentions for the property. Under current zoning law, it would require Celik to obtain six special use permits and one zoning variance to open the Mediterranean food restaurant he envisions for 286 Lark, the erstwhile Legends.

“With the zoning difficulties,” he said, “it was just not possible.”

City of Albany zoning law, essentially unchanged since the late 1960s, has been undergoing a review and revision process for the last two years with the aim of simplifying rules which have become a difficult-to-navigate morass of restrictions that Mayor Kathy Sheehan characterized as “antiquated.”

After more than 100 meetings and public hearings on the subject, the city finally released a final draft of its Rezone Albany proposal early last month.

“When we look throughout the city at some of the challenges that we have in our neighborhoods,” said Sheehan at an event at city hall for the draft’s release, “particularly challenges with vacant and abandoned buildings, particularly commercial, sometimes we found the enemy and the enemy was us.” Antiquated zoning, she said, is making it difficult for potential business owners to move forward with development plans that could benefit Albany neighborhoods.

The proposed zoning changes would bring nearly half of an estimated 35,000 non-compliant properties into compliance and dramatically reduce the amount of variances and special use permits required by developers like Celik, who said he won’t close on the Lark Street property until Albany Common Council passes the new zoning plan. He currently has a contract to purchase the property — for $675,000 less than the original asking price of $970,000 — pending the Common Council vote, which, according to Councilman Richard Conti, is expected to take place on either Monday, April 17 or Monday, May 1.

“After two years of work and discussion and the planning department ‘s dialogue and solution with the neighborhood on some of the issues with closing time,” said Dan Atkins, chairman of the Lark Street BID, co-owner of Savoy Taproom across the street from 286-288 Lark and manager of two other Lark businesses. “I think rezone will encourage new development on the street by simplifying expectations and reducing the unknowns that go into opening a new business.”

Celik already has a name for the wine and craft beer tavern he envisions for the ground floor at 288 Lark, formerly DeJohn’s — he’s going to call it Lark Wine & Tap. There, he will not only highlight regional wines and craft beers but also offer a light fare/tapas menu. Since the only variance he needs to open that concept is one that he will still require under the proposed zoning, a tavern variance, Celik said that he will start construction on that right away and wait until the new zoning is in effect to begin on the family restaurant next door. Ultimately, he plans to have both businesses, as well as apartments on the top two floors at 288, completed and in use by the end of the year.

“They have been very supportive,” he said of the neighborhood associations, speculating that they are appreciative of the fact that the apartments would reduce the commercial aspect of the property and the restaurant would be family-oriented. “What I’m proposing to do is a win-win for everybody.”

“The redevelopment of 286-288 Lark Street is a big piece of the puzzle when it comes to revitalizing Lark Street”, said County Legislator Chris Higgins (D-5), who represents the area. “Not only will this project renovate two vacant buildings, but it will also create local jobs and increase foot traffic in the Lark St corridor which will be beneficial to the other small businesses on the street.”

Celik and his siblings are from Istanbul, Turkey, where their father is a commercial developer. His brother, Ayhan, is a certified chef and his sister, Aynur, an artist. They have owned Mercato’s for more than a decade and opened Extra Napkin in December 2015. The menu they intend to serve at their new restaurant on Lark would be a combination of the fare offered at those two restaurants.

“We will put our hearts and souls into this project and make it as nice as possible,” said Celik, hopeful that the city and the neighborhood will work with him to accomplish that goal. “I have my faith in the neighborhood,” he said. “That they will embrace us and support us.”

HEALTH and FITNESS: Learn how to identify a diet from a gimmick