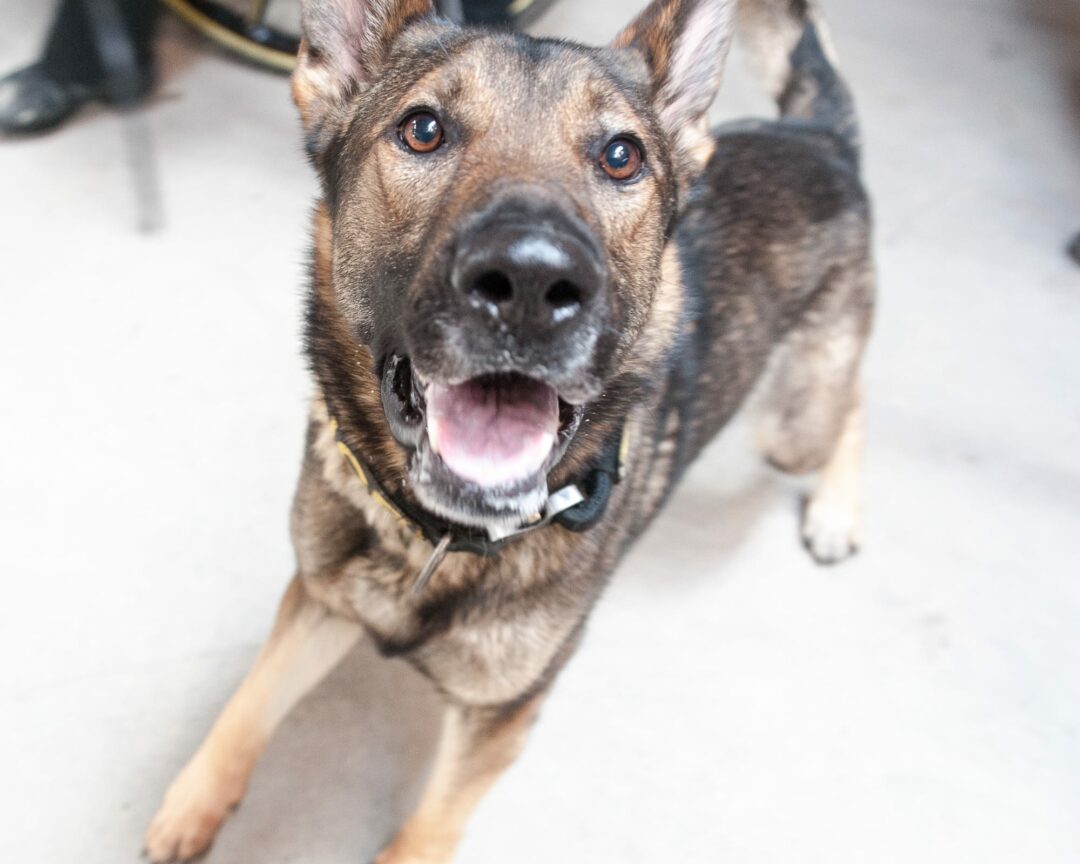 After nearly a decade-long hiatus, Albany County Sheriff Craig Apple has slowly built the K9 program back to a full squad of eight German Shepherds fully trained in patrol, tracking and explosive and drug detection.

Soon, the newest K9, Fisher, named after Sheriff Fisher who headed up the department in the 1970s, will spend his entire shift at the Albany International Airport along with his handler Deputy Adam Kerel.

Currently dogs cycle in and out of the airport to mainly check bags for explosives and drugs, but just the presence of a K9, especially something as iconic as a German Shepherd, might give someone pause before engaging in any nefarious activity.

“Explosive dogs are constantly there and we use the narcotics dogs at the airport as well. My first dog found almost 60 pounds of marijuana that was being shipped in from California,” said William Rice, the chief deputy in charge of the K9 unit who now handles K9 Sarge. “But the big thing is people just seeing the dogs out there.”

The Sheriff’s Department uses Shepherds because they are the most versatile. Labrador Retrievers have a better nose, but a Shepherds’ nose isn’t too far behind and they are better patrol dogs – tracking and officer protection – than the more docile Labs.

To this day, with all the technological advances since the Middle Ages when dogs were first used as a law enforcement tool, a dog’s nose is still unmatched.

“They can find a person or a narcotic in minutes where it would take humans hours. There are people trying to duplicate it, by using machines and computers, but so far they have not been successful,” said Kyle McCraith, a master sergeant and K9 coordinator. “If we need to use the dog’s teeth we do, but typically we don’t want to or have to. We use them primarily for their noses.”

Finding and training a K9

Most of the dogs come from Shallow Creek Kennels in Pennsylvania, the owner there scouts out dogs from all over Europe and brings home the ones he deems suitable for K9 work.  U.S. dogs, McCraith said, have been bred for show for so many years the breed is now bastardized.

Figuring out if a puppy will be a good K9 is never easy, McCraith said, because you never know what you are going to get and some things can’t be trained in or out. There are certain traits, though, like alertness and excitability, that give indications the puppy will have what it takes.

With the exception of two that were donated, the dogs – and their food and SUV transports – are purchased using drug forfeiture money.

“Basically, the drug dealers pay for our K9 unit,” Rice said with a grin.

Finding narcotics or explosives might be intense work for the handlers, but the dogs basically do it for a toy and someone to play with. It’s not unlike how you

would train a mutt from the pound to sit, stay or rollover.

“We pair the reward, usually a toy, with the odor, be it drugs or the explosive precursor,” McCraith said at a recent training session in one of the buildings at the Altamont Fairgrounds. “When they find the odor, they sit and they get their toy, a tug toy, and the deputies play with them.”

Training is ongoing, because regardless of what they can do, at the end of the day, it’s still a dog just looking for someone to tug the other end of the rope.

All the handlers develop a special relationship with their dogs and take them home at the end of each shift. When a dog retires, they go to live with the handler.

“There is a bond every handler has with its own dog. It becomes part of the family,” Rice said.

Apple said the unit is open to any municipality in the county and beyond who needs the skills of a well-trained K9. Last year, the unit answered some 200 calls and the Albany County K9s are called on to sweep schools, make security sweeps for visiting dignitaries, track missing persons or fugitives and they routinely sweep baggage at the airport and the county jail for contraband and play a role in crowd control.

Some of the K9 work has been high profile but, as with other aspects of law enforcement, most of the daily grind goes unnoticed.

For example, In May 2016, a woman ultimately charged with DWI walked away from an accident and right off a 60-foot cliff in Thatcher Park. Deputy Patrick Strollo and his K9 Turner tracked Erica Barkman’s scent to the cliff’s edge, she was rescued and her life was saved.

“It was dark out and there is no way we would have found her without Turner,” Strollo said of his K9 partner who is trained in tracking, narcotics detection, handler protection and evidence searches.

In a case with a much unhappier ending, Strollo and his K9 at the time, George, found the body of Kenneth White buried in the snow along Thatcher Park Road after his cousin, Tiffany VanAlstyne, left him there to die.

“There are other handlers who have had successful tracks but there was not a person at the end, but we get a direction of travel or other pieces of evidence,”

Sometimes, the dogs don’t find anything and it’s considered a win.

“We have bomb threats at different schools and once one happens there seem to be a bunch of others close behind,” said Investigator Kayla Apple while training with her K9, Jack. “Even if we don’t find anything our dog cleared it, and the people have some piece of mind. Sometimes it’s better to not have a find.”

And most of the work is preventative.

“As an explosives dog, our job is detection, but if people see the dogs out there it reassures the public,” said Joseph Martell of his K9, Mo. “If we are walking among the bags at the airport, or walking the curb or walking the county building, the people see it and maybe they think twice.”

At eight dogs, the unit is at full force, Apple said, unless the federal Transportation Security Administration follows through with the the lukewarm promise of funding for another four to have a dog at the airport 24-seven.

“I don’t think I will add anymore after this one,” Apple said of Fisher. “We didn’t anticipate this one but he is an awesome dog with an incredible personality and an incredible sniffer so he will fit in perfectly at the airport.”

Another benefit, said Apple, who has two lovable German Shepherds and a vicious, 8-pound Shih Tzu at home, is public relations.

“They have a calming effect. We are the seat of county government and we have the airport and it makes the employees feel safer,” Apple said. “And people love to see the dogs.”

Large garage burns to the ground on Albany Shaker Road