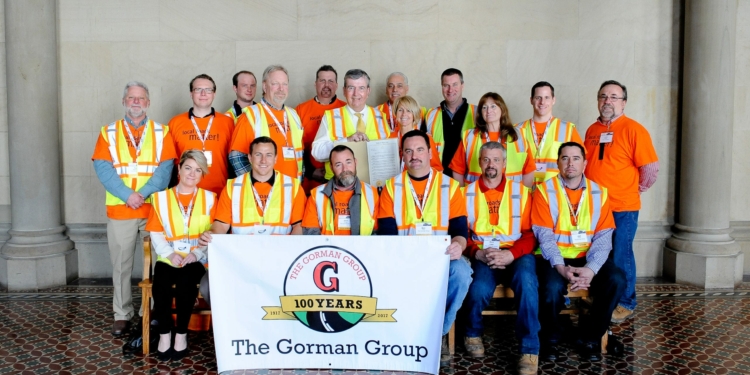 “Senator Neil Breslin wanted to celebrate and share the achievements of those businesses which substantially contribute to the economic vitality of their communities,” said Breslin’s Legislative Assistant Matthew Barron. “Over the past century, The Gorman Group has been under three generations of family members who have stayed true to their philosophy: That honest, professional and reliable work is good business.”

While at the State Capitol to advocate for more CHIPS (Consolidated Local Street and Highway Improvement Program) funding in early March, The Gorman Group — which touts itself as “The Best Damn Highway Construction / Materials Company on  the Planet!” — also received a copy of a resolution drafted by Sen. Breslin (D-44) recognizing the company for its achievements and economic contribution over the last century.

In 1916, just a few years before the Great Depression, Albert and Walter Gorman founded their business at 45 Glen Ave. in North Troy. Consisting of an office and small two-bay shop, The Gorman Brothers established a solid customer base in the Capital Region, even as businesses around them were failing, and made it their goal to provide quality workmanship. In the early days, Gorman loaded emulsions through the Mobile Oil Terminal in the Port of Albany, NY. Eventually, Gorman sold their North Troy facilities and purchased a small building in the Port of Albany that was originally used as a guard shack during World War II. Over the years a large maintenance facility was built and the office was expanded to meet the growing business needs.

From that small shop in North Troy, The Gorman Group has evolved into a multi-faceted company. In addition to applying asphalt aggregate mixes, the company continues to pioneer new pavement technologies and green processes. After three generations, The Gorman Group provides products and services to over 750 municipalities throughout New York, New England, and the Mid-Atlantic states.

Proving that there is still room to improve after nearly 100 years in business, The Gorman Group implemented a new process for the upkeep and repair of equipment that saved the company $500,000 a year in 2013, and slashed the percentage of employee hours spent on emergency — from more than 33 percent to 1.6 percent. Mark Gorman told Better Roads magazine in October 2013, “The difference is night and day. We are much more professional with how we handle equipment.”