Helping a child with ASD transition to the adult world 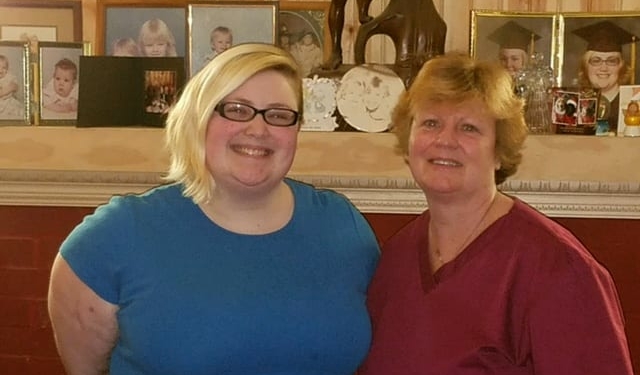 Laurie Frey, right, has learned from her own experience of raising a child with autism to never stop services and to find a services coordinator that has her daughter Brittany’s best interests in mind.

Parents know that at one point or another, they will have to ask – and answer – some tough questions regarding their child’s future: education, finances, health and otherwise.

For parents of children with autism spectrum disorders (ASD), such questions and decisions arise with greater frequency and complexity, especially as their son or daughter reaches the age (21 here in New York) at which he or she is no longer eligible to receive school-based services, a phenomenon commonly referred to as “aging out.”

If this is the first time you have heard the term, it certainly won’t be the last, as more children are being diagnosed with ASD, and, in due time, will be transitioning into adult services themselves. In an article 2011 New York Times article titled “Autistic and Seeking a Place in an Adult World,” it was noted that “some 200,000 autistic teenagers [were] set to come of age in the United States over the next five years alone.”

These are just a few of the questions that Laurie Frey of Colonie has been asking and trying to answer ever since her daughter, Brittany, now 25 with the developmental age of a 15- or 16-year-old, was first diagnosed with ASD when she was 15 months old. Frey, a registered nurse, is the author of “My Puzzled Angel: A Mom’s Journey with Autism,” a narrative of her experiences before and after Brittany’s diagnosis.

While the questions surrounding “aging out” issues themselves may be the same, Frey says that the answers will vary widely both from person to person and day to day.

“Everybody is so different on the spectrum,” she says. “[The] answers will be different for everyone. … Every day is new and exciting.”

Frey says the needs of an adult child with ASD are constantly changing. As a result, the questions need to be asked and answered on a regular basis.

“No two children on the spectrum are the same. Some are non-verbal, some are high functioning, while others fall into a moderate category,” says Debbie Provost, whose 11-year-old grandson, Eric, is non-verbal with severe to moderate ASD.

Provost, author of the “Keep it Simple” blog published on spotlightnews.com, adds that “the very unpredictability of a child with autism” also contributes to those ever-changing answers.

Frey had already started to think about her daughter’s future, when at 5 years old, Brittany had yet to utter an actual word. While she remembers asking other family members questions (What are we going to do when she becomes of age? Are we going to be able to be able to provide for her? What is her future going to be?), she says that more formal discussions with Brittany’s teachers didn’t begin until sometime between fourth and sixth grade.

Provost, on the other hand, believes that it’s best for parents to start those formal discussions with educators, social workers, extended family members and close friends — anyone actively involved with day-to-day care — “when the child is very young.” In fact, she suggests that the dialogue about a child’s future should begin as soon as the parents start to evaluate schools, stating that “not all schools have the resources/staff needed to help make that decision and head in that direction.”

“Ideally, the child will be enrolled in a school/program which has a complete program from toddler to adult,” she says.

While selecting the appropriate school or program is certainly a crucial component to discussions about a child’s future, there is an even more compelling reason to start talking early and often. Frey says it best: “What happens if I get killed in a car accident tomorrow? If something happens to me, we have to make it so that she’s going to make it.”

Frey made this stark realization about two years ago, several years after her intense determination — “I’m a nurse; I can do this!” — that she alone could figure out what Brittany really needed. Her determination was so intense that she cancelled all services when Brittany was in sixth grade. She now admits that decision was a big mistake.

Frantically, Frey not only applied to a variety of adult programs for her daughter, she also put in requests for a coordinator to help “direct” her as she continues to make decisions about Brittany’s future. Her persistence has paid off. Brittany has adult services in place, while Frey has selected a coordinator whom she believes has Brittany’s best interests in mind and will advocate on her behalf to make certain she continues to get the services she needs.

In fact, having a service coordinator who has the child’s best interests in mind is essential for a successful “aging out” transition.

Tammy Conte, a Medicaid service coordinator with Community Living & Advocacy Supports, Inc., says that “having a service coordinator to help with the process is a must, [as] adult services and transitioning to them has changed a great deal over the past few years.”

A service coordinator is one of two components to ensure, when applicable, the child’s parents have the final say in what happens. Conte says the other is 17A guardianship.

After trying to tackle the transition on her own, Frey is grateful to have a service coordinator to help. However, she strongly encourages parents and other family members to stay involved and also serve as advocates for the child.

“We are so very grateful for our service coordinator,” she says. “We would be lost without her and her knowledge of autism and special needs.”

If a parent doesn’t feel their child is getting the very best from their service coordinator, Frey offers this simple suggestion: “Move on.”

Another must: “Life insurance for [a] guardian to care for the child,” says Provost.

The most important piece of this puzzle is 17A guardianship.

“Without that in place,” says Conte, “legally, once your child turns 18, you cannot make decisions for them anymore.”

According to New York State Unified Court System’s website, “In New York state, when a person becomes 18 years old, they are assumed to be legally competent to make decisions for themselves. This means no other person is allowed to make a personal, medical or financial decision for that individual. If a person is ‘intellectually disabled or developmentally disabled,’ has difficulty making decisions for themselves and [is] over 18 years old, you can ask the Surrogate’s Court to appoint a guardian for him or her.”

Parents can either start the process online or by contacting the Surrogate’s Court in their county of residence to request an Article 17A Guardianship Packet.

So why should all parents become familiar with this concept even though they may never have to concern themselves with their own children “aging out?”

The prevalence of ASD continues to grow. Back in 2000, the Autism and Developmental Disabilities Monitoring Network of the Centers for Disease Control estimated that only one in every 150 children had been identified as having ASD; by 2010, its estimate rose to one in every 68 children.

In the coming years, more and more parents will either have to wrestle with the questions and issues that come with “aging out” themselves, or will they know someone else who will.

• Center for Autism and Related Disabilities at the University at Albany

Calendar of Events for parents