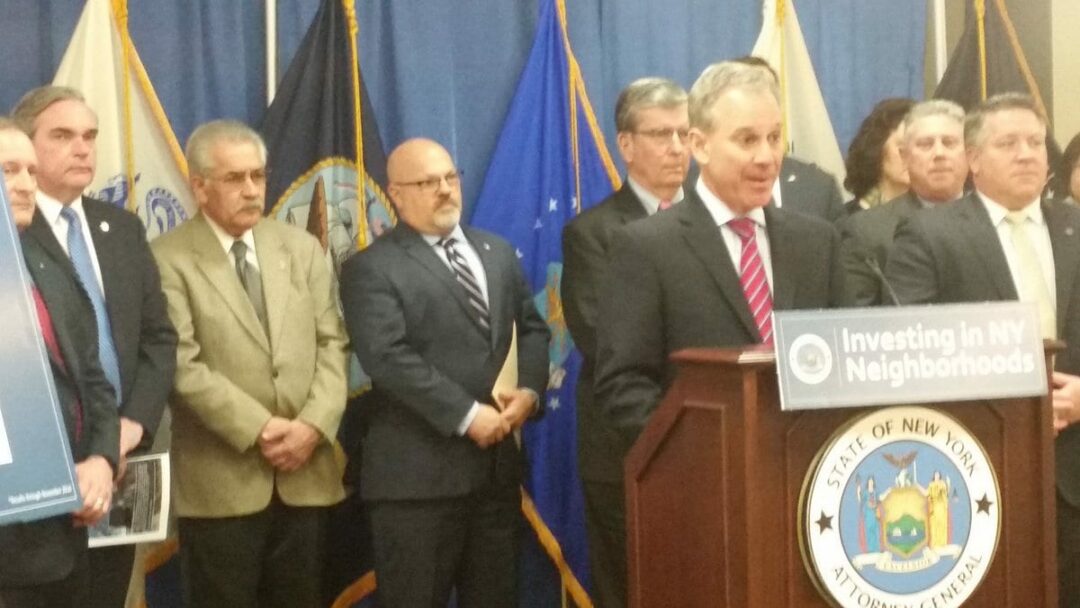 ALBANY COUNTY – Attorney General Eric Schneiderman has announced $20.9 million in grant funding for land banks across New York working to acquire abandoned and blighted properties and return them to productive use. The grants were awarded under the Land Bank Community Revitalization Initiative (CRI), established by the Office of the Attorney General (OAG) in 2013 with funding secured through settlements with the nation’s largest banks over misconduct that contributed to the housing crisis.

“Communities throughout New York are still suffering the fallout from the housing crisis, and my office will continue to support innovative efforts to help them recover,” Attorney General Schneiderman said. “With today’s round of grants, 19 land banks will build on the significant accomplishments already achieved over the past three years, helping put abandoned properties back into use, revitalizing towns and cities, and creating a safer, more stable, and more vibrant environment for New York’s families.”

The Attorney General was joined for the announcement by Saretha Sotomayor. The Sotomayor family are the new owners of a long-vacant home on Clinton Avenue in Albany, acquired by the Albany County Land Bank and refurbished in partnership with Habitat for Humanity. The land bank and Habitat are partnering to rehabilitate four additional properties in the area.

“My family lived for a time in a homeless shelter, so my husband and I are so grateful for the opportunity the Albany County Land Bank and Habitat for Humanity provided, allowing us to buy our first home and provide stable housing for our children and grandchildren,” said first-time homebuyer Saretha Sotomayor. “Thank you to Attorney General Schneiderman for supporting land banks across the state, so that other families can achieve their dreams the way we achieved ours.”

“These funds, combined with the strong support of Albany County,” said Adam Zaranko, Executive Director of the Albany County Land Bank Corporation, “have enabled our land bank to emerge as a leader in the ongoing efforts to eliminate blight and increase homeownership opportunities to help stabilize neighborhoods throughout the County.”

This round of funding, which was made possible by settlements the Attorney General secured last year with Morgan Stanley and Goldman Sachs, provides renewal grants to the state’s original ten land banks and start-up grants to nine more newly established land banks, many of which are in rural areas across the state.

The grant program is being managed by two community development intermediary organizations, Enterprise Community Partners and the Local Initiatives Support Corporation, which oversaw the application process, selected the grantees, and will be providing technical assistance to the land banks as they implement their plans.

“This is another positive development for the land bank,” said County Legislator Chris Higgins (D-5), who helped to establish the Albany County Land Bank Corporation in 2014. “To date, our county  investment in the land bank has leveraged over $4 million dollars in grants — money that will go a long way towards revitalizing blight in our neighborhoods. I couldn’t be prouder of the work it’s doing.”

Between 2000 and 2010, the number of vacant properties in New York State increased 27 percent, according to OAG. Following the collapse of the housing market, the New York State Legislature passed a law in 2011 establishing land banks — nonprofit organizations with the ability to acquire vacant, abandoned, or foreclosed properties and rebuild, demolish, or redesign them. By restoring vacant or abandoned properties, the goal of land banks is to lower costs for local governments, benefit public schools, reduce crime and boost local economies.