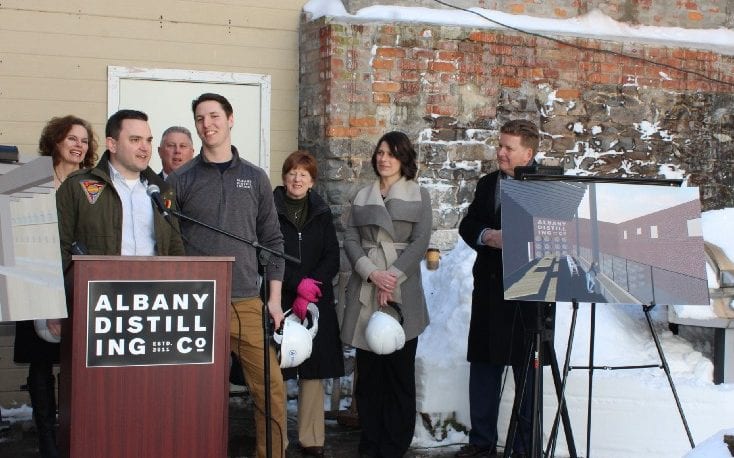 ALBANY — Albany Distilling Company, Inc. (ADCo), Albany’s first licensed distillery since the beginning of Prohibition, has announced they will expand into a new facility in downtown Albany as part of a $1 million-plus investment by the company.

ADCO will occupy more than half of the 6,000 sq. ft. property at 75 Livingston Avenue, which was built in 1846 as a residence and later served as a warehouse for a Nabisco factory.

“We’re excited to expand further into Albany, especially right in the Warehouse District,” said John Curtin, founder and co-owner of ADCo. “Albany Distilling prides itself on promoting ‘drink local’ and, through this significant expansion of our operations in the Capital City, we will be able to continue to sell and promote Albany-made spirits to the rest of the world.”

In the company’s original and present location, adjacent to C.H. Evans Brewing at the Albany Pump Station at 78 Montgomery Street, increased production of ADCo’s signature products — Ironweed whiskey, Quackenbush Still House rum, ALB vodka, Death Wish coffee vodka — has led to constraints that limit the consumer’s experience, said Curtin and partner Rick Sicari. The new location will include a new tasting room with a full bar featuring New York-made spirits, cider, wine, and beer. Customers will be able to also visit a showcase of the Empire State including but not limited to: prints and posters from New York State will adorn the walls; salvaged slate coasters from Queens will protect tables; and whiskey flights will be served on maple cutting boards from the Adirondacks.

“Given our location here in the Capital Region, we feel it is an unspoken rule that it is our responsibility as a spirits producer and a craft beverage manufacturer blocks away from the State Capitol, to show off the rest of what New York has to offer,” said Sicari. “This new facility makes good on that promise

“The growth and success of Albany Distilling demonstrates that entrepreneurs and small business owners do have a local impact,” Albany County Executive Daniel P. McCoy said at the announcement and wall-breaking ceremony at the new location on Friday, March 17. “I am pleased to be able to join the celebration of a new venture for the company and look forward to the opening of the new facility.”

“Upstate New York, in particular the Capital Region, has seen an incredible amount of growth in the craft beverage industry,” said state Senator Neil Breslin. “With this new expansion here in Albany, The Albany Distilling Company is right at the forefront of this resurgence.”

“Albany Distilling and their expansion to a newer, much larger facility is visual proof of the rapidly expanding craft beverage industry that has found its home in the heart of the Capital Region. Within the last decade there have been a number of distilleries, cideries, and breweries emerging throughout New York’s Capital. Albany Distilling and their plans to develop a more prominent facility that will better accommodate the demand for their products is a prime example of the exponential growth in the craft beverage industry,” said state Assemblymember Patricia Fahy.

ADCo worked with Ares Commercial Real Estate (ACRE) during the acquisition and has hired ME Design Studio, from Troy, as the project’s architects. Total project costs, including property acquisition, fit-up, fixtures, and production elements, are expected exceed $1 million. The distillery will receive funding assistance in the amount of $30,000 through a Downtown Albany Retail Grant Program for interior and exterior project renovation costs, and $60,000 through Empire State Development’s capital grant program.

“Albany Distilling’s expansion is a perfect example of the entrepreneurial spirit that is changing the face of downtown Albany and the Warehouse District,” stated Georgette Steffens, executive director of the Downtown Albany Business Improvement District. “Their new location will bridge the growth between the two districts, attracting investment and providing amenities that residents and visitors have come to expect from our great Capital City.”

ADCo will continue to operate production out of its current location at 78 Montgomery Street.

Additional company and product information can be found online at AlbanyDistilling.com, on Facebook (fb.com/albanydistilling), and on Twitter (@AlbDistCo).