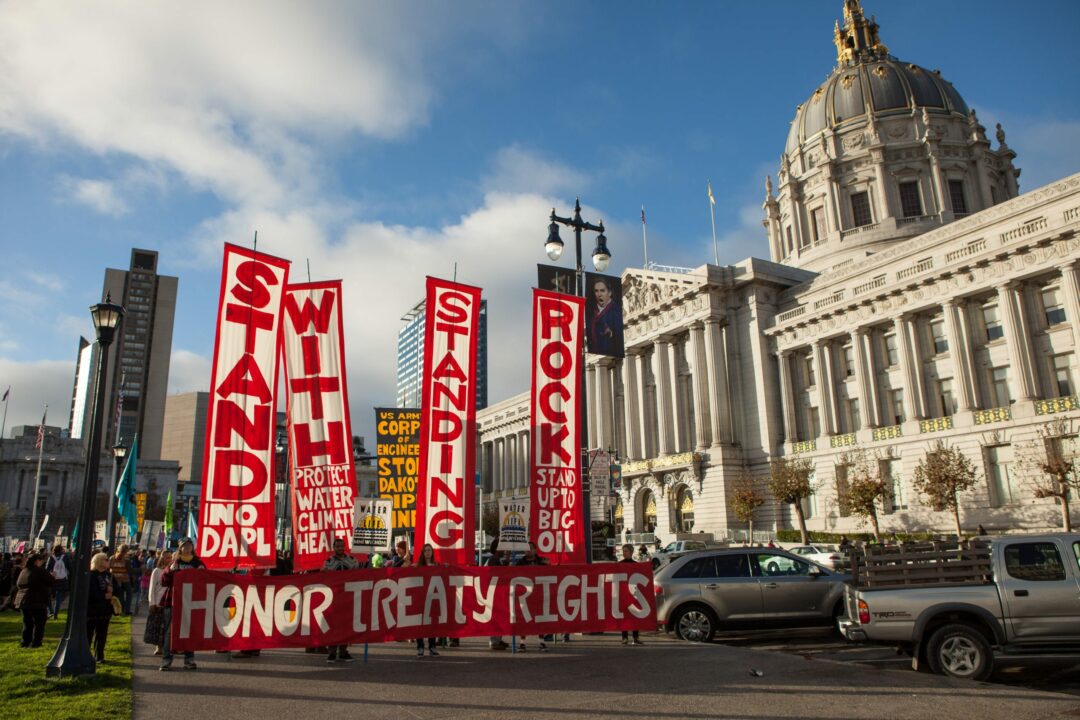 One day after Gov. Doug Burgumto ordered protesters at Standing Rock in North Dakota to evacuate their encampment by 2 p.m. on Wednesday, Feb. 22, abrogating a significant victory issued by the U.S. Army Corps of Engineers on Dec. 4, a local energy activism group will protest TD Bank, an investor in the contested Dakota Access pipeline.

The emergency evacuation order was signed last week to allow private contractors to clear the now-famous Oceti Sakowin camp area, which officials say is in a flood plain. State officials reportedly offered assistance and medical support to evacuating protestors, some of whom made claims on Facebook that law enforcement used technology to block transmission of raids to dispel the demonstrators. By the middle of the day on Wednesday, the once-sprawling encampment was reduced to less than 50 hold-outs, after only 10 were reportedly arrested just outside the encampment for refusing orders to evacuate the area. Those who remained expected to be expelled from the area Thursday morning.

Once complete, the $3.7 billion pipeline will stretch through four states — from North Dakota into South Dakota, through Iowa and terminating in southern Illinois. It is expected to move 470,000 barrels of crude oil daily. Currently, the project is complete, with the exception of the contested portion under North Dakota’s Lake Oahe, half a mile upstream from the Standing Rock Sioux tribe’s reservation. The tribe is concerned the pipeline will affect their drinking water supply and place downstream communities at risk of contamination from potential oil spills, but has also exhorted protesters to leave — both for their own safety and for that of the environment, which hosted as many as 10,000 protesters at the movement’s zenith. The Sioux have said they intend to fight the issue in court, through a lawsuit filed by nonprofit environmental law organization Earthjustice.

“Without funding by major banks neither this pipeline nor any of the proposed pipelines in NYS could be built,” said local activist group People of Albany United for Safe Energy (PAUSE). ” As we head towards the planetary crisis of catastrophic climate change we cannot afford to build any new fossil fuel infrastructures.”

PAUSE invites any concerned New Yorkers to join them at TD Bank at 125 State St. in Albany today, Thursday, Feb. 23 at noon. Phone calls to TD Bank CEO Bob Dorrance will be made, flyers will be distributed and a statement will be read.

Letter to the Editor: The Lions Club says ‘Thank You’