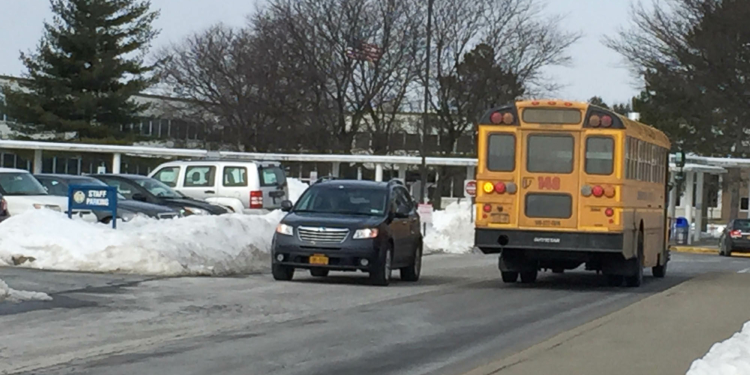 COLONIE — By an overwhelming majority, even those who voted against the $196 million bond proposal in December, want to see more security at North Colonie School District buildings.

The district took a survey during the Dec. 15 election when residents voted down the project by a count of 2,189 to 1,842, or 54 to 46 percent, and also offered it online after the vote was tallied.

Meanwhile, a group of residents, calling itself “We Love Our North Colonie Schools” have organized in an effort to help push the next referendum through when the scaled down project tentatively goes before the voters in May.

According to the survey, 85 percent of all voters said they favor enhancing security, including 94 percent of people who voted for the project and 70 percent of those who voted against.

“It is the times we live in, unfortunately,” said Superintendent Joseph Corr, mentioning school shootings like Sandy Hook in 2012.

He said the plan did incorporate building a secure vestibule at a single point of entry for each school building. Visitors would have to show identification to a staffer monitoring the entrance and give a valid reason for visiting the school before allowed into the building. It falls short of an armed guard and metal detectors but it is more secure than allowing anyone off the street to just walk through the doors.

Of the 4,031 residents who voted on the capital project, 506 chose to fill out an exit survey. The 13 percent response rate is the lowest since the district began conducting exit surveys in 2010, while voter turnout was the highest of any district referendum since 1986.

Respondents were asked to weigh in on the seven different areas of improvements the bonding would have covered: Moving sixth grade to

One selling point of the project is the need to accommodate a projected 1,000 more students attending school in the district over the next decade. Another is the opportunity to continue getting an increase of state g=building aid – 69 percent compared to 52 percent – which expires in 2018.

Adding new synthetic turf was the least popular with just 44 percent of all voters approving and 63 percent of yes voters and 8 percent of no voters.

Corr, however, said the district might not have adequately communicated the benefits of putting turf on Walker Field, where the Blue Bison play its home football games.

He said right now the field is used maybe 18 times a year. Synthetic turf, though, would be stripped for home field hockey, soccer and lacrosse games as well as football and the more durable surface could be used for athletic team practices and a host of other activities including gym classes.

“We are talking about taking a field that is used maybe 18 times a year to using it potentially 1,000s of times a year,” he said. “We included that information on flyers and attempted to convey that message to the public but given the results of the exit survey it is something we need to look at but also communicate more effectively.”

Another objective of the project the district may not have communicated well enough, Corr said, is the expansion of media centers. Rather than the name implies, he said, it also enhances the science, technology, engineering and math – collectively known as STEM – programs at the school.

“The next step is for us to take the feedback from the exit survey and community forum, process that and look at how we reduce the scope

and communicate with the public about the issues we face and then when we have something more definitive come out to the public and see how we can move forward,” he said.

Those for and those against

“Nobody likes their taxes to go up but $250 a year is $20 a month which is not nothing, but it is less than dinner out once a month, or a cup of coffee at Starbucks once a week,” said Samuel Johnson, a founding member of We Love Our North Colonie Schools. “It’s not a huge increase to ensure the district is on good footing as far as infrastructure for the next 25 years or more.”

The father of three – with two attending North Colonie schools and another to attend soon – said he and others were “shocked” when the project was defeated and blames a perfect storm of events.

“It wasn’t as much the scale of the project as much as other things such as the date of the vote and single polling location and bad timing. It was an anti-establishment year and people didn’t want to vote for this type of thing,” he said.

Tim Nichols, a former county legislator and another founder of the group supporting the project, said those against the project hid behind anonymous flyers and mailers. An attempt to reach those responsible for the mailers was unsuccessful.

“There was a movement against the bond act led by anonymous cowards who spend an unknown amount of money on flyers and mailers to mislead taxpayers about the bond,” he said.

Board of Education President Linda Harrison said the district has to do something given the enrollment projections, the outdated science and math labs and the need to increase security.

“We, as a board, have to make sure our decisions are in the best interest of our students but we also have to take into consideration our obligation to the taxpayers of the community,” she said. “Doing nothing is not an option. Doing nothing would not be responsible.”

Effort to enhance Delaware Avenue in Bethlehem far from complete

SAVE Colonie wants to hear from you