State and county government seek to reach a growing percentage of veterans who are dramatically underserved by current programs: Women 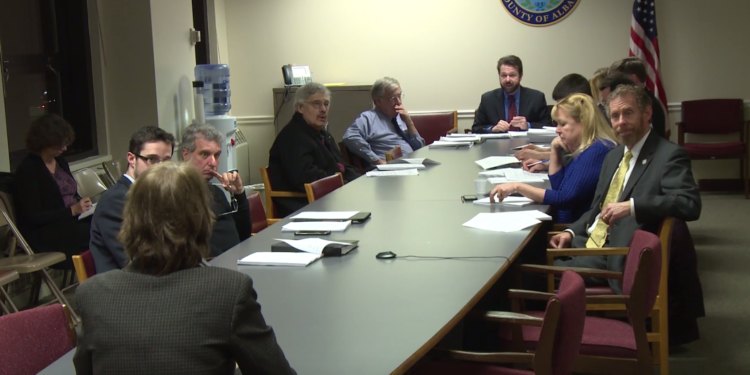 At their meeting on Monday, Feb. 13, the Albany County Legislature voted unanimously to propose a pilot program to the New York State Legislative Women’s Caucus to improve services for female veterans.

“Because of their role in the military and society, women have unique transition challenges,” wrote Karen Ziegler, director of the Albany County Crime Victim and Sexual Violence Center (CVSVC) in a letter to Chairman Sean Ward, urging the legislature to approve the grant application. “They experience deployment and reintegration differently than men. Women focus more on the disruption of interpersonal relationships, feeling less social support once they return home, and do not find services or commanders prepared to support a woman and her family after deployment.”

The Legislative Women’s Caucus reached out to CVSVC with concerns the New York women veterans are underserved by Veteran’s Administration (VA) programs which, as Zeigler told the legislature’s law committee in January, are geared more toward men even though women are a growing part of the veteran population. Noting that the VA has had difficulty establishing gender-specific support programs for women, Ziegler pointed out that women are less likely to use VA benefits — research conducted by the VA has shown that one in five women delayed or went without needed care during the previous 12 months.

The pilot program, which would run for a year, would address that problem by creating a new position, staffed by a woman veteran with experience in counseling, who would “provide safety planning, individualized case management, therapy, peer support groups and promote self-sufficiency to victims of domestic violence and sexual assault who are active military, veterans or connected to the military.”

In a sample budget, Ziegler estimated that the position will cost a little more than $85,000 during the first year, the funding for which she hopes will be granted by the state and potentially extended if the program is successful. “This is just a pilot to see what this would look like,” she said. “What kind of services we could wrap around it. We would certainly liaison with Veteran’s Bureau. And, I don’t want to say that we wouldn’t serve men, but we would want to definitely focus our efforts toward serving women better.”

“This is a very exciting proposal,” said Law Committee Chairman Bryan Clenehan (D-30), recognizing Ziegler and her department for being selected by the Women’s Caucus to help tackle the issue. “It’s a very exciting expansion of your services.”

The proposal can be viewed here on the legislative agenda, page 26.