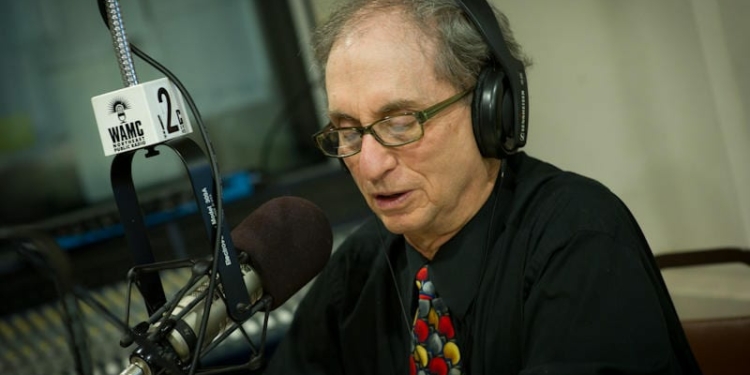 “It’s all Trump,” said Alan Chartock, president and CEO of WAMC, the Albany-based public radio station that broke fundraising records on Feb. 6, during the first of three annual fund drives traditionally held by the station.

“This is a record-breaker,” Chartock said, noting that the nonprofit only began asking for a million dollars “a couple of years ago.” Typically, he said, it can take an average of seven to nine days for the station to hit that goal. While a little less than $500,00 was contributed prior to the fund drive kick-off and held in a “Locked Box,” Chartock said, “This is the first time we’ve done it on the first day we were actually on the air.”

WAMC began in the late 1950s as a radio station for Albany Medical Center and Albany Medical College (AMC), hence the call sign.  In 1981, the Federal Communications Commission (FCC) license on 90.3 FM was transferred to a 501c3 tax-exempt entity, WAMC, Inc., which had been set up by a group of five corporators — including Chartock, who joined  the station in 1979 — affiliated with the State University of New York and New York State government. Currently, WAMC has 12 broadcast radio stations serving seven states in New England and Mid-Atlantic States and operates The Linda/WAMC Performing Arts Studio, a performance venue in Albany.

Chartock can only remember twice in the history of the station when fund drives have even come close to ending so swiftly, and in neither case, he noted, had the financial ceiling been set so high. Both, however, do involve Gov. Mario Cuomo, the father of our current state governor who lost to Gov. George Pataki in 1994.

During his time in office, Cuomo had a regular show on AMC, called “Me and Mario.” After losing to Pataki, it was WAMC’s understanding that the governor would not be appearing on the subsequent fund drive initiative. “But he showed up,” said Chartock. “And we had a half an hour conversation and it was his valedictory ‘goodbye.’ There were people in tears.”

The second instance happened after Pataki was in office. One of the governor’s top aides called Chartock to ask why Cuomo still made regular appearances on their station. “I said, ‘well, because he’s the greatest orator in the United States,” said Chartock, adding that he offered Pataki the opportunity to appear as often as he liked or even to have his own show. “He’s certainly not the most articulate guy in the world,” he said, “but I would have done it.”

Chartock walked in on the first day of the next fund drive and received word from a friend at the state Department of Education, who informed him that the state had figured out a formula by which to deprive the station of its funding. “So,” he said, “I get on the microphone and say, “Ladies and gentlemen, do you know what just happened? And I explained what happened and I said, ‘You know, when the nazis came, the first thing that happened was they took the radio station. When the communists came to town, the first thing they did was take the radio station.”

The phones, he said, “did not stop ringing.”

Even so, said Chartock, neither of those drives came close to netting $1 million.

Concerns over the federal administration’s threats to cut funding for The National Endowment for the Arts, the National Endowment for the Humanities and the Corporation for Public Broadcasting as part of a wider program of federal budget cuts, said Chartock, are the most likely explanation for the enthusiastic giving. Supporters also helped to raise money for The First Amendment Fund, established in 2006 to protect the station in the event of a loss of federal funding. That fund, he said, has dwindled in recent years, but is now receiving renewed focus and funding.

WAMC donors have the opportunity to leave comments along with their donations. “I don’t remember all of them,” said Chartock. “There are thousands and thousands. But some said, ‘I’m scared.’ Some said, ‘ WAMC is one of the places where there is a true forum where anybody can say anything.’”

In addition to raising money for the of running the station — somewhere in the neighborhood of $7 million a year — WAMC partners with other organizations, such as The Adirondack Council, who match drive funds raised by the station and contribute those funds to a charitable cause.

This year, The Adirondack Council committed to keeping 200 tons of carbon pollution out of the atmosphere. Other February 2017 partners included: The Seymour Fox Memorial Foundation to provide 1,080 nights of emergency shelter; Joseph’s House & Shelter in Troy, which provides meals, access to personal care, medical and dental care, legal services and other support to keep the homeless off the streets; and The Fox Foundation, which, helped to provide 780 babies in the region with a month’s worth of diapers that will be distributed by The Food Pantries for the Capital District.

WAMC will hold two more fundraisers this year, but Chartock said that they’re happy to take donations at any time. To donate to the station or to its First Amendment Fund, visit www.wamc.org.