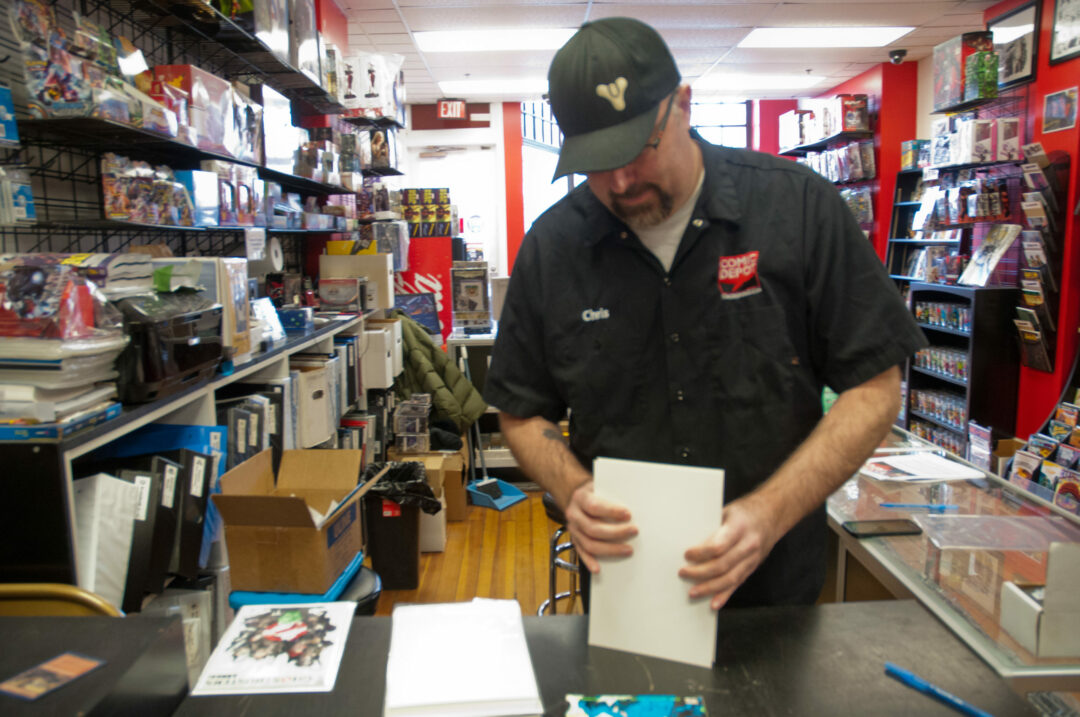 Chris Kaminski works behind the counter of The Comic Depot in Saratoga Springs, where a special auction is taking place to help his late friend, Darren Carrara. (Michael Hallisey / The Spot518)

With pen, paper and a prowess for storytelling that would later earn him the nickname, “the William Blake of comics.” From his desk, Kirby penned storylines that pitted his protagonists against impossible odds, saving the day often by being at the right place, and at the right time.

In Saratoga’s Comic Depot, Kirby’s characters are represented by all sorts, depicted by action figures, as statuettes, on posters, in film and, of course, in a monthly comic book. But, through a twist of compassion and imagination, local comic book artists have personified the heroic spirit Kirby instilled in his characters; and, subsequently into his fans.

Tragedy struck the Comic Depot community last November when the store owner, Darren Carrara died unexpectedly from a heart attack at age 39. He left behind a wife, his two children, and a throng of loyal customers and comic book fans from the store he ran for 13 years.

“He was a phenomenal person.” said Chris Kaminski, manager of Comic Depot, of Darren Carrara. “He could make everyone feel important. He was somebody who, while you were talking to him, he was really listening. He was on point about being attentive to everybody.”

“I started working for this company, officially, I think it’s been three

years,” said Kaminski, explaining he’s helped the store to some capacity for several years before. “Darren was my best friend, and that’s why I started working here.” said Kaminski. “It was to help alleviate some of his problems, and to manage the store with him. … It was great working for my best friend.”

“Being in this business, we’re friends with lots of the local [artists]. Darren just had this ability to become friends with everybody. People have donated tons of artwork, and there would be even more if we waiting this out even more.”

There are 18 pieces of work, all showcased on a top shelf display in the store, and each are to be auctioned off with all proceeds donated to Carrara’s family. The bidding period ends on Saturday, Feb. 25, at 5 p.m. That’s when Kaminski will close the door to the public, and a gathering of artists and fans will await the naming of each winning bid.

Artist Jeff Bonesteel said he was compelled to donate his Batman piece to the auction, recognizing that the moment was for him to be at the “right place at the right time.” When Kaminski asked Bonesteel if he wanted to donate towards the cause, he said, “Hell, yeah. I want to donate. That would be awesome.”

“We used to hang out in here, even back when the store was in the mall,” Bonesteel said, about Carrera. “He was an awesome dude. … I don’t know. Still trying to get used to it.”

Tobin’s and the West Albany neighborhood