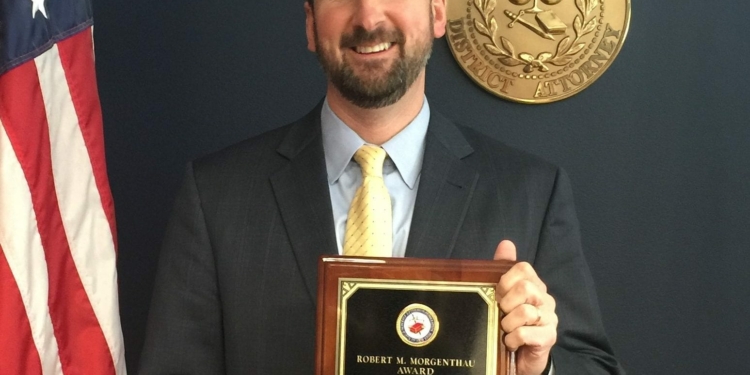 “David is recognized by his peers and his partners in law enforcement for his hard work, his dedication to the legal process, and his commitment to one standard of justice for all,” said District Attorney David Soares in a statement. “He is an exceptional trial attorney and a worthy recipient of this prestigious award.”

Rossi was presented the award at DAASNY’s winter conference in late January. It is named after legendary Manhattan District Attorney Robert Morgenthau, and each year is presented to four assistant district attorneys from four different regions of the state.

“Dave’s reputation for honesty and integrity are well-earned,” said Special Counsel Christopher D. Horn. “He is a talented attorney and a role model for everyone in this office.”

Rossi, 46, began his career with the DA’s office as a college intern and has worked for three different Albany County DAs. After graduating from Albany Law School in 1998, he was hired as an ADA assigned to the Appeals Unit. He has since served as Bureau Chief of the Joint Special Victims and Homicide Unit where he handled sex crimes and prosecuted murder cases.

He is active in DAASNY and coordinates training sessions on technical and legal subjects. He also lecturers at and coordinates statewide trainings with the New York Prosecutors Training Institute.

“I am sincerely humbled by this award,” Rossi said. “I thank my colleagues at DAASNY and the many associates in the legal profession that I am honored to work with each day.”

In 2015, Horn was recognized for his contributions to the legal community and received the Morgenthau Award by DAASNY.