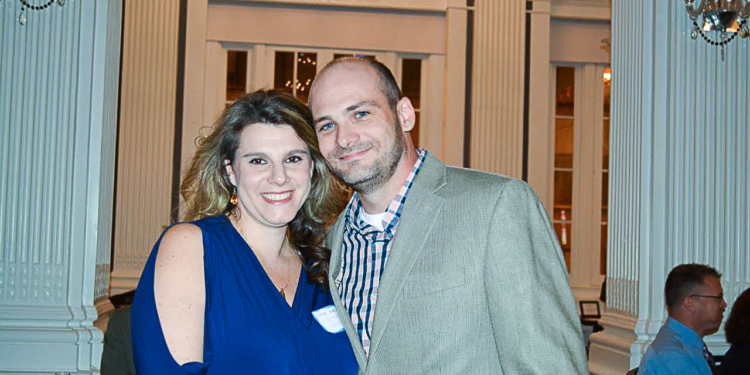 Scott McIntyre, founder of Athletic Haven, poses for a photo with his fiancee, Chana, during the organization’s “What Moves You” dinner. (Photo submitted)

COLONIE — Athletic Haven, the athletic nonprofit focused on providing equal or, low to no cost opportunities for would-be athletes in the Capital District, is now on the fringe of forming its first team and moving into its first season.

After losing his 6-year-old son, Tyler, in 2012, the program’s founder, Colonie resident and multi-sport coach Scott McIntyre, decided that he wanted to create something that would provide all Capital District children with a shot at early training and access to competitive sports at no cost. After completing a series of tryouts for the program’s first team for its first season, boys’ 12-and-under basketball on Feb. 6, McIntyre hopes to have 10 to 13 kids for the first season.

Since November, Athletic Haven has been working on hiring a coach and putting together more fundraisers. Over the holidays, McIntyre said that Athletic Haven is getting ready for an “aggressive 2017.” He said the organization has been growing; he himself has been delegating tasks to his board, and they’re focusing on getting even more teams off the ground, including softball by the end of the summer and soccer in the future, once training space can be secured.

“It’s been great,” McIntyre said. “We’ve had some more media attention, which is nice. The reception’s been terrific. Everything has been running in a positive direction.”

Right now, Athletic Haven has had gym space dedicated to them in Cohoes and Troy. Besides tryouts for the basketball team, Athletic Haven hosts open gyms for children who want to come and play casually.

During the tryout process, interviews are conducted with the prospective athletes and their family members to try to gauge what the player can bring to the program, and what they’re hoping to receive back. McIntyre said that talking with parents has given him an idea of what issues families were having with school and travel teams, and gives Athletic Haven a way to pinpoint issues it can fix to provide kids with better, more inclusive experiences.

“Interacting with the kids is something I do every day and really enjoy, but sitting down with the parents, and getting to know them and getting to know how we can help their families, and how this program can really help them and their child…it’s really exciting. The approach you need to take is a ‘no child left behind’ approach, regardless of how good they are. If they aren’t good, we’re going to make them better.”

And, McIntyre admitted, even if it does move slowly at first, what matters is persevering.

“We just have to be patient until it gets big enough. It’s just going to take time,” he said. “It’s brand new. There’s going to be growing pains. Inevitably, with something new, you have growing pains. You have some hurdles, no matter what size.”

While McIntyre said Athletic Haven is focusing on its upcoming fundraisers and getting enough funding to launch a grassroots campaign, its number one priority is getting its message out to the families who need the program.