Troy’s town crier: A ‘Humans of New York’ approach to the people of Troy 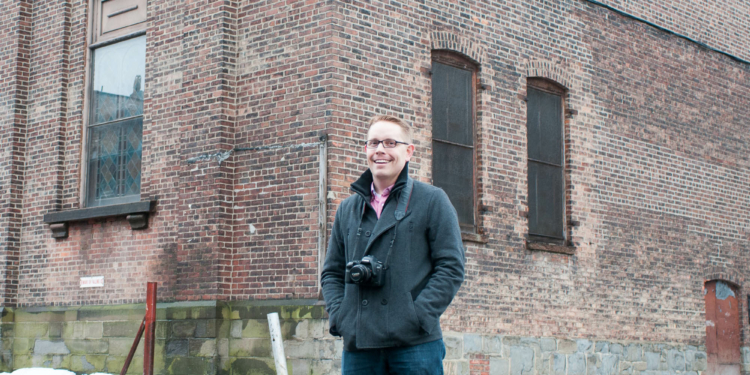 Two lessons the editor and publisher of Troy Stories is learning, and hopes to spread.

The website, and parallel social media platforms, is the brainchild of Jesse Gardner. In the most simplistic of terms, Gardner embarked upon the project to tell stories of random people and, when taken collectively, tell the story of Troy.

Peel back a layer, though, and the project is a bit more profound.

“It was born out of last year’s political turmoil,” he said while at Troy Stories’ home base, the Troy Innovation Garage on Fourth Street. “That whole season there was a whole lot of talking going on and maybe not as much listening as there should have been. I was one of the ones doing a lot of that talking, I tend to be opinionated. I wanted to spend some time listening to people and give a platform to the community at large. A voice to those who have none. I held off publishing off for a little while, but with the election I felt it was a good time to start talking about empathy and compassion.”

The historically polarizing election wasn’t necessarily the reason he started Troy Stories. He had been considering the project for months, and had been collecting material since Oct. 1, 2016, before he published his first story within a day of Election Day.

“My original intention was two-fold. To give people a better understanding of who lives in Troy. To paint a broader picture of what Troy looks like,” he said. “And a subtler point is, maybe, to give people stories that are similar to their own. There is a sense of community in knowing someone else is struggling with this or that too. Someone else is having a hard time finding work, or someone else is burying themselves in sports because they don’t want to get caught up in drugs. There are similarities in that. They read it and realize they are not alone.”

Since he began interviewing, he has talked to about 125 Trojans from all walks of life – a cricket player from Pakistan, a television news anchor, a war veteran, addicts and alcoholics, success stories and the downtrodden.

As diverse as his subjects are, though, he doesn’t believe we are really all that different.

“When I began everyone was talking about the election and it seemed everyone was on one side or the other,” he said. “Then I interviewed this one woman who had strong feelings about how humans are all the same. We may look different, we may act different, we may have different beliefs, but fundamentally there is this common humanity we all share. That was inspiring to me.”

An extension of his pledge to talk less and listen is a conscious effort to lay aside all judgments, preconceived stereotypes and cookie cutters and to just tell the other person’s story.

“It really is an endeavor in empathy,” he said. “The stories that stand out most are the ones where I have assumptions about a person – we are all really good at that – and I think I know their story and then you talk to them and they flip all the assumptions on their head. Those are the moments I enjoy. It lends credence to the point of the project. It’s easy to label people until you delve a little deeper and see who they are, and what they are. That’s what I really enjoy.”

To find the stories is really pretty simple. Gardner walks around Troy’s different and diverse neighborhoods and just talks to people. He’s been to Lansingburgh, South Troy, the East Side and has spent some time walking around the Rensselaer Polytechnic Institute campus. But, admittedly, he gets most of his material from downtown. The Troy Innovation Garage where he works is conveniently located and where he finds the greatest concentration of people.

He does try to be fair, not only to the people he interviews, but to the city too. For example, he had one stretch where he seemed to be interviewing just homeless people, and if he published all of those in a row it would appear Troy was one big shelter. He doesn’t not publish a story, though – unless there just isn’t enough material in any given life for a few hundred words – but rather chooses to mix up the respective “themes” a bit.

Sometimes, it’s easy to get people to open up. Other times it takes some light prompting. And other times it’s just impossible, for whatever reason, to get them to say more than a sentence or two. In all, he said, he has about an astounding 80 percent success rate, or he gets a story from eight in 10 people he approaches.

He said he unwittingly, and often times unwillingly, discovered a flair of having people open up to him while he was riding the train from his home in Trenton, New Jersey to his job in Manhattan.

“People would just start talking to me and we would get into these deep, philosophical conversations when all I really wanted to do after working all day was sleep on the train until I got home,” he said. “That’s where the spark, the embers of thought, for Troy Stories came from. You know you have this knack for people coming up to you and telling you their story … why don’t I make the most of that.”

It took more than a few months for that ember to catch.

Born and raised in Columbia County, his family moved to Wilton where he attended high school. He attended a Bible college in Florida where he earned a degree in Pastoral Ministry and is still an ordained minister.

In 2000, the now near 40-year-old found himself teaching English classes and working as a youth pastor in New Jersey. He then moved back to Chatham, met his wife, and in 2005 moved to Philadelphia where he was working as a pastor and he started Plasticmind Design, a web development company.

His company led to full time work with Simply Recipes, one of the nation’s largest food blogs, where he handled all online content. That ended when the company was abruptly sold, so in 2015 he moved from Philadelphia, where he, his wife and three children lived for about a decade, to Melrose and was back hawking Plasticmind. After a few short months, the very real fear of being an entrepreneur sunk in – “I don’t have any work so how am I going to pay the bills.”

“That Monday, I had a call with someone, a potential client and an old connection and they just wanted some advice,” he said. “I was crestfallen. I was upset. There was a lot of turmoil. I was here, and I was trying to network and connect with people and I was feeling overwhelmed and I felt the need to get out and do these Troy Stories and I asked three or four people but when you don’t have the confidence it is reciprocal so I didn’t get anything.”

Then, he said, he spotted one woman right outside the Troy Innovation Garage who “looked like maybe she needs to talk,” and he approached her.

But rather than stay around the corner, he pulled up his bootstraps and went off in search of someone else to talk to. The first conversation went pretty well, he said, until he realized he didn’t have his camera with him and all of the Troy Stories, following the model of Humans of New York, run with a photo.

But it was OK, he said. It was a confidence builder, and connecting with people was energizing. “I thought ‘this can work.’”

He went back to Troy Innovation Garage that afternoon and got a call from the guy he talked to earlier in the day with the message that his CEO wanted to chat. He landed a job. Over the next week, he said, he got another job and then another and “now I’m busy as all get out.”

Gardner concentrates on two things while writing his Troy Stories: Taking himself and his biases out of the equation, and asking the questions that will get to the heart of what makes a person’s heart beat.

“People get pushed into their own little cliques and their own echo chambers. There is a homogenization of ideas where you only spend time around the people who agree with you and it almost, in my mind, becomes hurtful because nobody was listening to any other point of view,” he said. “I am basically just telling the stories. I don’t interject myself at all.”

A couple stories stand out, in addition to the two mentioned above.

One South Troy man fought in Afghanistan and when asked about that experience told Gardner “I’m a murderer.” The man then tried to make sense of his time overseas, and couldn’t.

“It was kind of a political statement, but I try very hard not to pass judgment on the stories,” he said.

Another man found the only way he could find happiness was to sell all his stuff.

“It was clear he had stuff to start but that was what made him happy,” Gardner said. “And then he flipped it around and asked me the same question and it got me thinking about myself. The need to listen more and talk less is the greatest lesson I have learned by doing this project.”

Listening rather than talking, he said, deflates an ego and, in turn, teaches empathy and compassion. He hopes to pass on a little bit of both to people who read his work.

“I want to do more listening. I’ve learned to withhold judgment a little bit. To be a little bit more understanding. I learned to not talk as much. So, if more people read this, maybe they will do some listening as well,” he said. “I feel people connect better with stories, and when they meet real people it changes how they think about themselves and what they think about the world and by telling stories, I think it helps, in some small way, promote a culture of empathy and compassion.”