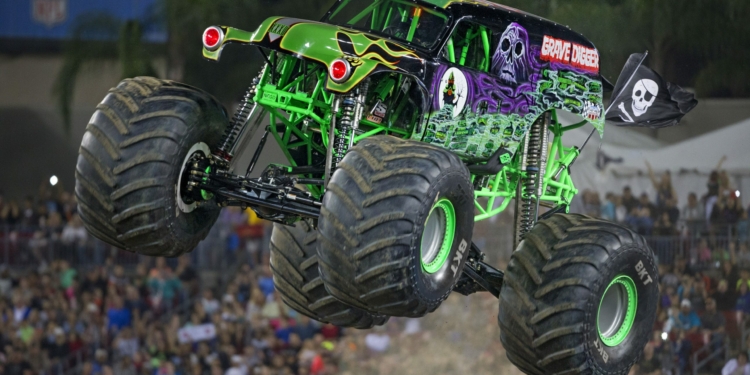 ALBANY — At 19, Tyler Menninga is realizing a dream that few can claim.

The Monster Jam series driver entered his second year on the circuit earlier this month, yet it’s the first time he will climb behind the steering wheel of the sport’s most iconic vehicle, Grave Digger.

“Grave Digger has always been a favorite of mine,” said Menninga, speaking about growing up as a fan of Monster Jam.

Today, Grave Digger is a household name. That’s due in part to the longevity of the Anderson family, the team’s owner, who celebrates their 35th anniversary this year. Another factor that led to the brand’s success is the tenacity of its original driver, Dennis Anderson.

Anderson built the first Grave Digger by adding tractor wheels to the body of a 1951 Ford panel truck for mud bogging. As the story goes, Anderson was often on the receiving end of verbal jabs from other drivers who incorporated modern and, for competition sake, lighter truck models. He supposedly said, I’ll take that truck and dig your grave with it. Whether he said that or not, Anderson style of driving supports the claim. In a sport that demands speed, power and a penchant for auto-mechanical acrobatics, Grave Digger earned the crowd’s admiration. Anderson’s aggressive style often produced spectacular crashes, and short-lived runs during shows. Nevertheless, Grave Digger earned a following that rivaled Bigfoot — a rivalry that continues today.

“Dennis [Anderson] has created what Monster Jam is,” said Menninga. “This sport wouldn’t be without Dennis Anderson. He’s created such a legacy. This being the 35th anniversary and me hopping into the Grave Digger truck this year, it’s a tall order. We’ve got quite the fan base to keep happy this year. We want to do good for them each and every time we go out there on that track.”

This year, Albany is going to see something different out of the competition when the tour roars into the Times Union Center Saturday, Jan. 21 and Sunday, Jan. 22. The tour promises to test the versatility of each driver as they go head-to-head in seven different competitions, driving three different vehicles — trucks, speedsters and ATVs. Drivers battle for points in both racing and freestyle events, and the point leader from each tour receives a bid to the Monster Jam World Finals.

Nevertheless, the entertainment still involves the famed trucks, altered in both size and strength to such an extreme they’re called “monsters.” Custom built engines that bristle and growl burn up to 10 liters of methanol per 80 meters, providing 1,500 horsepower. With each vehicle required to be on tires no shorter than 66 inches in height, drivers operate vehicles equivalent to the size of a two-story detached garage. When that garage holds years of Monster Jam accolades and 35 years of brand recognition, it can be daunting for a young driver.

“[I’m] a little bit nervous,” admits Menninga. “So long as I can go out there and put a smile on every fan’s face every night, that’s all that matters. Win, lose or draw, if I can get out of that truck happy, I know the fans are happy.”