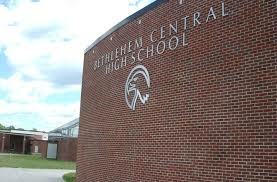 The deadline to submit an application to become principal of Bethlehem Central High School is Friday, Feb. 3.

The former principal, Scott Landry, offered his resignation last October, after being on paid administrative leave in May 2016. According to the school district, he was placed on leave due to complaints that he used his position to solicit potential clients. Landry had attended a Capital District-wide job fair as a representative of BCSD, where he reportedly obtained a mailing list of people looking for jobs. Soon afterwards, he had sent emails out to those people, offering his insight and coaching advice for a fee to help clients land prospective jobs in education. Immediately afterwards, Bethlehem Central began receiving complaints.

While Landry has not returned to his position since May 9, his salary — $131,514/yr. — is still being paid. He contended that he was placed on leave as retaliation for information he uncovered regarding finances and grading practices at the BCHS Lab School. However, he did refund the $160 he earned from the four clients who took him up on his offer.

HEALTH and FITNESS: Get yourself on a meal plan, stat!