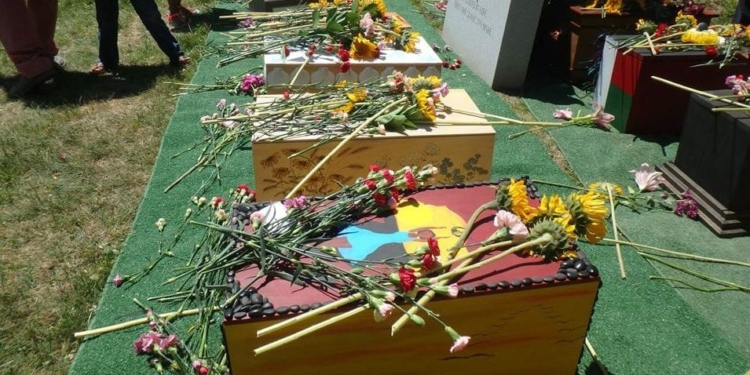 The bones of slaves found at Schuyler Flatts, buried in June // Photo courtesy of Underground Railroad History Project of the Capital Region, Inc.

ALBANY — Gov. Andrew M. Cuomo announced late last week five projects from across the state that received 2016 Historic Preservation Awards to honor excellence in the protection and rejuvenation of New York’s historic landmarks. Two of those projects are right here in the Capital District — in Colonie and in Troy.

“By honoring the past and preserving the unique character of New York culture, these projects help revitalize communities and attract new visitors and economic activity,” said Cuomo on Dec. 9. “I congratulate this year’s recipients on their great work to honor the rich history of the Empire State and preserve these assets for generations to come.”

This past summer, the remains of 14 enslaved people were reburied at St. Agnes Cemetery in Menands, not far from where their unmarked graves were discovered during a 2005 Town of Colonie construction project. Based on investigations, it was determined that the remains, six women, one man, two children and five infants, were roughly 200 years old. The burial ground was dated between the 18th and early 19th centuries and was part of an estate owned by the Schuyler family. In 2015, artists, woodworkers and students created burial containers for each set of remains. In June 2016, the containers holding the remains laid in state at Schuyler Mansion State Historic Site in Albany as part of a celebration of their lives. The following day, the remains were reburied with great ceremony beside a tombstone that marks the site. “Here lies the remains of 14 souls known only to God. Enslaved in life, they are slaves no more.”

The rehabilitation of the Quackenbush Building in downtown Troy is the result of a partnership between Quackenbush Properties and the Tech Valley Center of Gravity, an innovative nonprofit entity that supports startup companies, spurs job creation, and encourages economic development. The Quackenbush Building was built in 1857, served as a dry goods store until 1937, and later housed local businesses until 2001. The $7.4 million rehabilitation project has rescued and transformed the vacant and deteriorated building into an innovative business development complex that has infused new life into this local landmark as well as the surrounding area.

Established in 1980, the state preservation awards are given by the state Office of Parks, Recreation and Historic Preservation each year to honor excellence in the protection and rejuvenation of New York’s historic and cultural resources.

“I congratulate all those involved from both the Schuyler Flatts Burial Ground in the Town of Colonie and the Quackenbush Building in the City of Troy for their hard work and commitment to revitalize their respective properties,” said state Sen. Neil Breslin. “Since 1980, the New York State Office of Parks, Recreation and Historic Preservation has done an outstanding job of identifying projects across our entire state to preserve and restore. Historic preservation provides not only a link to our past but also helps build a bridge to our future as well.”

“Efforts to restore historic properties like the Quackenbush Building in downtown Troy are critically important to preserving our city’s rich heritage and continued growth and economic prosperity across our community,” said Troy Mayor Patrick Madden. “Through public and private investment and assistance from the federal and NYS historic tax credit program, the Quackenbush Building and Tech Valley Center of Gravity has become a hi-tech hub for the next generation of entrepreneurs, innovators, and startup companies. I express my appreciation to Governor Cuomo, New York State Parks, Recreation and Historic Preservation and our state, county and local partners for their commitment to strengthening communities and ongoing investment in our unique historical resources.”

Other award recipients were: the restoration and adaptation of World War II Naval hangars in New York City; a restored aqueduct overseer’s residence along the aqueduct trail in Dobbs Ferry; and the restoration and renovation of a century-old dental school in Rochester.

Agencies: Lottery tickets are not for kids