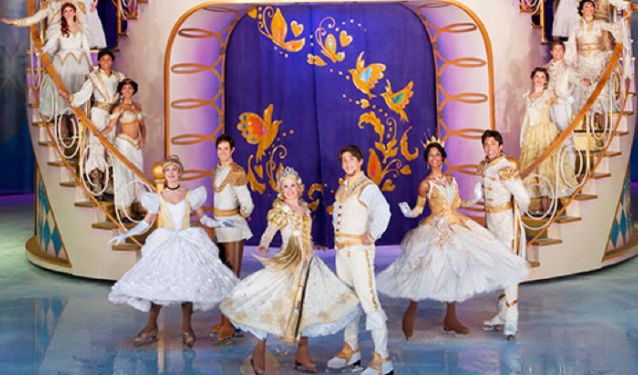 ALBANY — Disney audiences know that a dream is a wish your heart makes, but Disney on Ice dares young fans to now only dream, but go after them.

That message is the reason one of the production’s performers is skating with it today.

Kristy Wright has a lot of interests, and often excels at them all. She’s a decorated athlete in both skating and field hockey. And, in the classroom, Wright graduated from Carleton University in Ottawa with high honors, with a journalism degree.

“I was on the “future Olympian” track for field hockey when I was in high school and I won several local and statewide awards for that sport,” said Wright. “However, I loved skating more because I never tire of performing. I’d rather be on Broadway than at the Olympics.”

Wright minored in film studies while at Carleton, from which she graduated in 2012. It’s a nod to all the years she spent taking drama classes as a kid. “Ever since I was in elementary school, I was taking drama classes,” Wright said. Her studies as a thespian would coincide with her skating, which she picked up when she was five. It was at that young age coaches noticed her aptitude for the sport, and it blossomed into an amateur career full of accolades. “My mom is from Canada where everybody knows how to skate,” she said. “My coaches realized I had some talent and recommended I start private lessons after a few years.”

From her hometown in Fairport, Wright competed in both technical and showcase programs. Most people are familiar with technical competition, as that is what’s most often viewed during the Olympics. Showcase competition places less emphasis on the execution of moves, and more on theatrics.

“I would get really nervous during the technical competition, said Wright. The local amateur competitions around New York would do an event called showcase, and … I just felt more comfortable doing the theatrical part than on the technical part.”

Wright excelled at showcase, boasting an undefeated streak in New York that would last several years. She later earned a bronze medal in light entertainment at the 2005 National Showcase. That was followed by another bronze medal for pairs competition at the 2006 Empire State Games. In 2007, she earned gold at the ISU World Rec Team Championships in character spotlight.

Wright’s interests in both theatre and skating naturally led her down a path to audition for Disney on Ice, but despite her accomplishments, she felt she didn’t pair up.

Unlike most of the elite skaters in our company, I juggled many other sports and extracurricular activities,” Wright said. “[I] did not train nearly as much as my peers when I was in high school. … So, frankly, I didn’t think that I was good enough to do Disney on Ice.”

Of course, Wright still had a dream to pursue a role, and drew inspiration from champion skaters Kurt Browning and Scott Hamilton, known for their respective theatrics on the ice. “I base a lot of my show skating on physical comedy, much like Kurt Browning and Scott Hamilton,” Wright said. She won many competitions, including ISU Worlds, with her Charlie Chaplin comedic tribute. “The silent film star, as well as Browning and Hamilton, have shaped my understanding of how to manipulate body language into comedy.”

Casting self-doubt aside, Wright said she concentrated on her best attributes — her athleticism, her theatrics and her humor — once she finally auditioned for Disney. And, that’s what landed her the job. Today, portrays Drizella, one of Cinderella’s step sisters. The role lets her tap into her physical comedy.

Wright has been with the Feld Entertainment group for the past few years. When she’s not skating, she works with the production company’s press relations office, tapping into yet another one of her passions, journalism. She maintains a website that chronicles her work in print journalism, magazines, newspapers and internet blogs. Wright said her travels with the production company has exposed her to different people and cultures. And, the work press relations work he does for it helps hone her media skills. “It’s been a very rewarding experience here,” she said.

Disney on Ice’s “Dare to Dream” will be at the Albany Times Union Center Thursday, Dec. 15 to Sunday, Dec. 18.

“What I really like about the show is how personal the message was to me,” said Wright. “The fact that I would have always liked to have skated for Disney on Ice, but didn’t think that I could because I thought that I was at a lower level than my peers here, my co-workers, is really telling. I still pursued it. I just played up the elements I was good at, and that’s what got me here.”