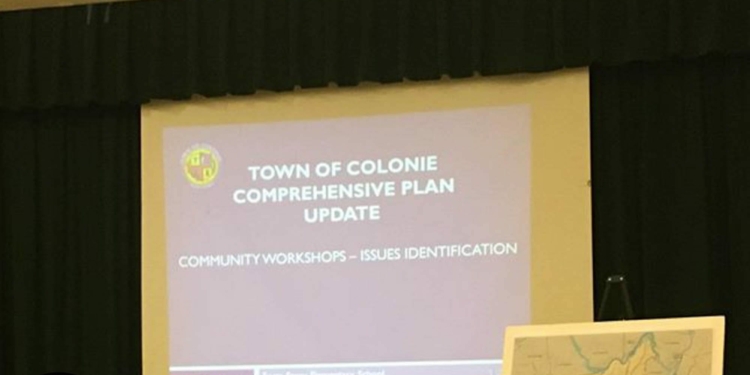 LATHAM—Last week, the Comprehensive Plan Committee Review Committee held its first of many community meetings intended to focus on identifying key issues in different geographical areas of the town.

The Comprehensive Plan Review process started earlier this summer, and right now the committee tasked with updating the plan, which has been referred to by some members of the committee as a “living document” that will serve as a town-wide guide for development and growth plans. With about 83,000 people in the entire town, the committee has decided to target smaller communities spread in different geographic areas of the town to be gauge what each territory’s priority issues with the town are. Last week, on Thursday, Nov. 10, residents from the northern end of Colonie turned out at Forts Ferry Elementary School to learn about the planning process, and to brainstorm what the enjoy about living in the town, and what they think could be improved.

Michael Welti, senior land use planner at Barton and Loguidice, the engineering firm that is overseeing the planning process, said that the committee is “currently in assessment of what the current state [of the town] is.”

Audience members were able to list off a number of positive attributes of the town, including bike and hiking paths, easy access to parks, a rich cultural history, and a strong sense of community despite the fact that the town is large and sprawling. Despite the frequent rhetoric from residents that Colonie is quickly becoming overdeveloped, participants at the Forts Ferry meeting said that they enjoyed the fact that the town was so centrally located in the Capital District, and that there seemed to be a good mix of residential and commercial development in the town.

Residents also listed the town’s highly touted emergency medical services and fire and police services as things they enjoyed about living in Colonie, as well as the low tax rates and plethora of neighborhood schools and churches at their disposal. Also mentioned as  a positive was access to the landfill, the expansion of which has been a highly contested issue for the past few months.

But, many of the positives mentioned by residents seemed to be a double edged sword for them, as they also reappeared when they were asked to note what aspects of the town they had issues with, or would like to see improved. For instance, while residents did say that they enjoyed parks such as The Crossings, they also felt like the town has not focused on preserving enough space for natural purposes, and that trees continue to be sheared at an alarming rate, and voiced concern over what they viewed as “overdevelopment of wooded areas.”

Stemming from resident’s earlier comments about Colonie being a central location came a concern with the heavy traffic the town sees. Overall, audience members seemed to be concerned that Colonie is at risk of losing it’s suburban feel and heading towards an urban aesthetic, with the continued building of chain restaurants around areas such as Wolf Road, and buildings being constructed very close to the road, as opposed to farther back, which residents argued, would give such areas a more natural and suburban look due to the increased room for grass and plant life.

Jackson Browne to play The Palace