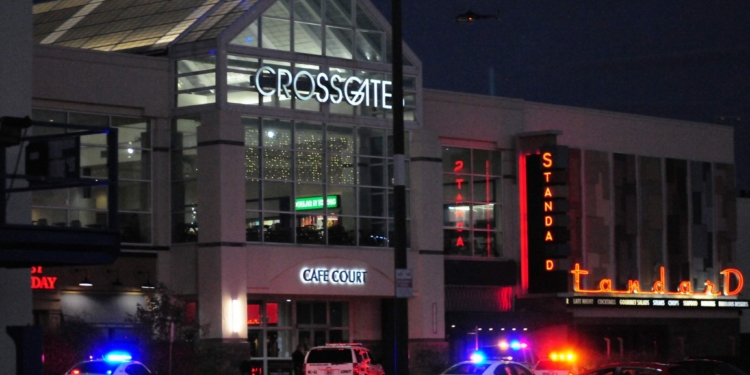 Multiple police agencies remained on the scene at Crossgates Mall at dusk Saturday evening as they continue their search for a suspect in an alleged shooting which took place inside the mall earlier in the afternoon.

GUILDERLAND —Nearly seven hours after initially responding to calls of shots fired inside Crossgates Mall, hundreds of law enforcement officials, employees and shoppers waited at and inside the mall, while a suspect wanted for questioning based on surveillance video remained at large.

Sunday afternoon, the Chief of the Guilderland Police Department, Carol Lawlor, updated the public and said that no arrests had been made yet, though the department was following leads on the case. Lawlor confirmed that one shot was fired, an the incident allegedly stemmed from two people who had been arguing.

Guilderland Police, along with town officials and a representative from Pyramid Management Group, which owns Crossgates Mall, held a news conference outside of Best Buy shortly after 9 p.m. on Saturday to update local media about the ongoing investigation.

On Saturday, Lawlor confirmed that her department, along with a host of other local agencies, State Police, and the FBI, have since responded to a call for shots fired near the Apple store on the mall’s first floor received at approximately 2:20 p.m. Saturday afternoon.

The mall quickly went into lockdown, and both shoppers and employees were instructed to shelter in place until notified otherwise. No one appears to have been injured as a result of the alleged shooting.

Lawlor also informed media outlets that area SWAT teams were still going through the mall, and that both employees and shoppers remain inside. At the time of the conference, she estimated that 10 percent of the mall had yet to be cleared and that those efforts would be complete “soon.” She also added that she did not know whether the suspect wanted in connection for the alleged shooting was still inside the mall at this time. While she believes that the public is safe, she reminded people to be vigilant, and to say something if they see something.

One mall employee, who spoke on the condition on anonymity, told Spotlight News that he “heard a loud crack” around 2:20 p.m. on Sunday afternoon.

“Everybody sort of had a collective realization that it was probably a gun shot because it seemed too loud to have been anything else,” he said.

The employee then described how he saw some smoke, and then he and other employees ran towards the back of the store because they weren’t sure whether or not the suspect was shooting into the store. He said that employees were led out of the store through the back and out of the mall into the parking lot.

None of the people who were near the front of the store said they saw what happened, according to the employee, but he said his manager, who saw the security footage of the alleged incident, confirmed that one shot was fired.

“It was all very chaotic,” he said.

During a briefing held around 4:30 p.m. Saturday, Lawlor said that authorities were looking for a black man wearing a white shirt and a black hoodie, who is about 6 feet tall and weighs about 200 pounds. When asked if police were going to release an image of the suspect to the public during the latter briefing, Lawlor replied that a image was not available and that a photo would not be released.

As of the latest briefing, that video is still being reviewed for additional information. Lawlor also states that authorities are still trying to determine just how many shots were fired and whether the incident was a confrontation between members of rival gangs.

Lawlor also confirmed that two people who originally matched the suspect’s description were detained and later released when police determined that they were not involved with the alleged shooting.

The chief also indicated that hundreds of people have been interviewed regarding the incident. She also encouraged people who took photos of the incident on their cell phone to share those images with police, as they have the potential to assist with the ongoing investigation.

A tweet posted early Saturday evening by one of the mall’s tenants, Albany Funny Bone, stated that Crossgates had closed for the day. A call made to the mall’s main phone number around 5:45 p.m. Saturday went unanswered. There was no message on the recording about the alleged shooting nor the facility’s closure for the day.

Joe Castaldo, director of shopping center management for Pyramid Companies, was cautiously optimistic that Crossgates would reopen for business Sunday morning at 11 a.m. However, he strongly encouraged prospective shoppers to watch for updates on the mall’s Facebook page and Twitter account, along with reports from local media outlets.

Castaldo also addressed the issue of the vast amount of personal property that was left behind by those evacuating the mall after the alleged shooting. Personal items left in common areas of the mall will be saved and placed in a secure area where shoppers will be able to retrieve their belongings after properly identifying them. Shoppers who left personal property in stores when evacuating the building after the lockdown should make arrangements with the specific tenant to reclaim their property.

While CDTA bus service to the mall was suspended, it parked about a dozen vehicles in the overflow lot across from Dave & Busters for evacuees to use as warming stations. All road entrances into the mall were blocked as of mid Saturday afternoon.

Lawlor also stated that Guilderland Police will have a visible presence at the mall on Sunday at the request of the management. She did not specify whether other police agencies would be assisting with those efforts.

Spotlight News will continue to update this story as more information is confirmed.