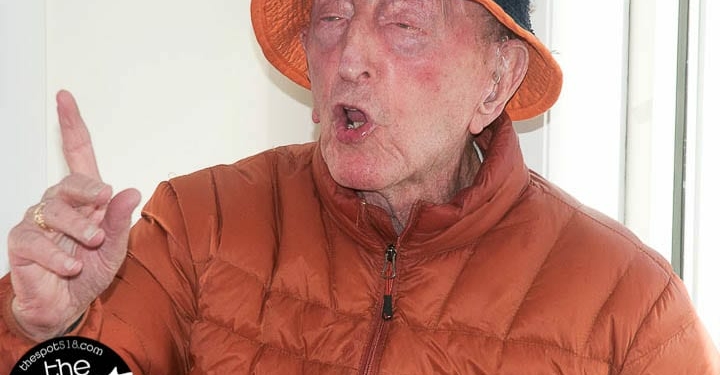 Irony is sometimes the way a man lives his life despite first impressions.

Born in Cohoes in 1925, Delmar resident Frank Murphy is among what television anchor Tom Brokaw coined “The Greatest Generation.” Yet, in 1943, Murphy was no more than someone who would “gripe” too much in the eyes of his squad leader in the 339th regiment of the 85th Infantry Division in World War II.

“In World War II, I had a big mouth and got in trouble all the time,” said Murphy, with an ever-present smile on his face. “I could never make (Private First Class) because I was moanin’ and groanin’. My squad leader, with me being a kid, when there was a dirty job to do it was ‘Murphy,’ ‘Murphy,’ ‘Murphy.’ In the beginning, I didn’t mind. Then, after awhile, I got in trouble.”

An Albany native, Murphy joined the Army in June 1943 with aspirations of being a paratrooper.

He trained at Camp Croft, S.C., and within days of deployment, he broke his thumb while horseplaying with some of the guys. After returning from the hospital, he said, his orders were to meet-up with another regiment — the 85th Infantry Division — at Fort Dix, N.J., with plans to embark for North Africa. The troops he’d be joining were already experienced.

“They’ve been training for a year for the desert, in the Louisiana swamps, and all that bit” he said. “And, everybody’s old. 35. 36. Some in their upper 20s. I’m 18. Youngest in the company. They were well trained. And, when they were doing things, here I am out of basic. They were quick. I’m watching what they were doing and trying to learn what’s going on,” he laughed.

The memories of serving in World War II, the Korea and Vietnam wars flood him at will, at no chronological order. Always preceded by an excited exclamation, his feet sometimes hopping off the floor like a kid opening a gift on Christmas morning. Each of the tales are devoid of gruesome details. All of his stories speak of his interaction between the people he met along the way. Many of whom are pictured in a modest portfolio he keeps with a sticker of the U.S. Army on the cover.

The years recount the stories of the Battle of the Bulge, and the decisive victory at Normandy. But, a few months prior to Allied forces storming the beaches of Sword, Juno, Gold, Omaha and Utah, the 85th Infantry faced the fieriest of combat. In March 1944, they reached Naples under the cover of night, and in the midst of a bombing raid. They pushed through to the frontlines established at Castleforte and Minturno, and for two months they fought German soldiers, many of whom had come off the horrific battle conditions of the Russian frontlines.

The Italian front was meant to be a strategic diversion, both taking Italy out of the war and drawing German resources away from Northern France as Allied forces prepared for Normandy. England’s Winston Churchill called Italy the “soft underbelly of the Axis,” and so Murphy’s squad received limited resources as it battled north to the Apennines, breaking through four German divisions.

Before the war ended, Murphy was named squad leader.

Despite the sideshow it was initially considered to be, the U.S. Army casts the campaign in a different light today. The U.S. Army Center of Military History states: From the invasion of Sicily in July 1943 until the final Axis surrender just south of the Alps in May 1945, the Allied armies in Italy had battled north over a thousand miles of mountainous terrain, through inclement weather, against a capable and determined enemy. Only the overwhelming Allied material and manpower resources and the countless heroic acts of hundreds of thousands of Allied soldiers in small unit actions of a type unique to the war in Italy overcame the Axis forces. Primarily, the Allied soldiers’ determination and aggressive spirit forced Germany to divert considerable men and materiel from other, more significant fronts in an ultimately unsuccessful effort to halt the Allied drive north.

Six years after the end of World War II, Murphy re-enlisted in the Army to fight in Korea. For a year, he trained troops at Camp Roberts in California before being shipped out with the 7th Division of the 32nd Regiment in 1952. For a moment, Murphy’s smile disappeared. The conditions in Korea were worse the World War II, he said. Worse than Vietnam — in which, Murphy fought from 1967 to 1969, during the Tet Offensive.

“What I remember most about Korea was the bitter cold,” he said. “It was -20 degrees at night… As we would try to get shut eye at night, the rats would be crawling through the bunkers.”

Murphy is the recipient of two Bronze Stars for service in World War II and the Combat Infantry Badge — affixed with a silver star in recognition of his service as an infantryman on the front lines of both World War II and Korea. Before retiring from the U.S. Army in 1968, the man who was told he’d “go out as a private” earned the rank of Platoon Sergeant.

At 91, Murphy has a particular focus. An Irishman with the gift for gab speaks little about what bothers him. He sits and speaks for more than an hour about war; no gruesome details, no with no complaints about conditions. If he starts remembering such things, he moves on to the next story. Feet springing up into the air, as he opens another gift.

There’s no reason to gripe.

Photos by Jim Franco. Click on a photo to view a fill size version of the rest of the gallery.