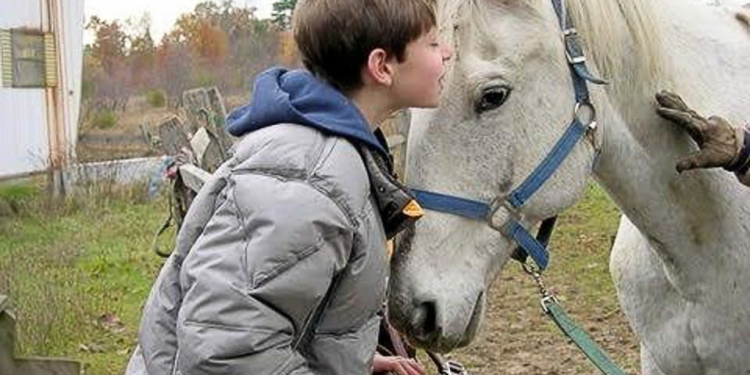 BETHLEHEM — The mother of a developmentally disabled boy who was killed in 2007 by a caretaker at a state facility in Niskayuna at the age of 13, has just published a short story in a Chicken Soup for the Soul book titled “Angels and Miracles,” released on the first of this month.

The story, called “Riding a White Horse in Heaven,” tells of the dreams that Jonathan Carey’s parents had about their son in the weeks following his murder—Lisa and Michael Carey both saw their son, who had been an enthusiastic lover of horses, riding a white horse while wearing a breast plate and wielding a sword.

Shortly after they initially spoke of that shared dream, they attended a memorial service at the facility where Jonathan was killed and saw a photograph of their son they had never seen. He was leaning over a fence to kiss a white horse.

“It basically just confirmed to Mike and I that Jonathan was riding a white horse in heaven,” said Lisa Carey. She discovered a Bible passage that she says helped to give her family comfort in those first terrible months—Revelations 19:14, which reads, “The armies of heaven, dressed in fine linen, white and pure, follow Him on white horses.”

“We both felt our dreams were like a picture of him riding with the armies of heaven,” said Jonathan’s mother.

Three months after those events, New York state passed “Jonathan’s Law,” due to the efforts of his parents, who actively sought justice for the death of their son. The law requires facilities to notify parents and guardians of any incidents that involve their loved ones and gives them access to incident reports and records of abuse that had previously been sealed. An inability to access such records is how Jonathan’s parents were kept ignorant of years of abuse their son underwent at two different state facilities, years of abuse that left Jonathan with a PTSD diagnosis and eventually led to his death.

Since that law, the Careys have managed to get other legislation passed, including: a ban on the withholding of food as a behavior modification tool, something that Jonathan Carey’s caretakers did when he was just ten years old; a bill to study the effects of overtime on the behavior and performance of employees who work with the disabled; and a bill that increased the penalty for endangering the welfare of a disabled person from a misdemeanor to a felony.

In 2008, they managed to change the definition of Social Services Law 412, which previously stated that children in residential care had to be at serious risk of death, protracted disfigurement, bodily organ damage, have protracted physical or emotional damage, or be sexually abused to be considered abused by New York state—anything less was deemed “unfounded.” The new definition expands the definition of abuse to include when a child is kicked, choked, burned, slapped, punched, smothered or suffers any such similar incident, despite the level of damage to the child.

Lisa Carey’s story was chosen from 5,000 entries to run alongside 100 other selected authors in “Chicken Soup for the Soul: Angels and Miracles: 101 Inspirational Stories about Hope, Answered Prayers, and Divine Intervention.” The book came out on Nov. 1 and can be purchased on Amazon or at your local bookseller.

Carey has also written a full-length, non-fiction book, not yet published, about the experiences her family went through trying to care for their son and then dealing with his death. She says she writes to share with others, particularly those who may be dealing with similar challenges, so they might benefit from her experience as they navigate the waters of trying to secure care and justice for loved ones. Currently, she said, she is looking for the right literary agent.

Lisa Carey and her husband continue to seek justice for disabled individuals who suffer abuse at the hands of their caretakers. “I really believe the 911 bill needs to be passed,” she said. “That bill would require people to call 911 in situations of emergency or abuse of the disabled, which currently does not happen. That’s a civil rights issue. We believe 911 was created for all people.” The Careys have been working to get the 911 legislation passed for nine years, according to Lisa. But they haven’t given up.