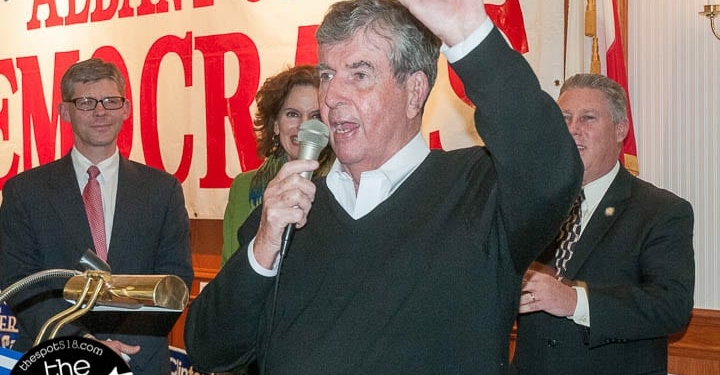 State Sen. Neil Breslin cruised to an 11th term, Tuesday, defeating Republican challenger Chris Davis with nearly 75 percent of the vote in the 44th Senate District, according to unofficial results from the county Board of Elections.

“None of them are easy,” said the Albany Democrat of another wide margin of victory, “but if you work hard good things happen.”

“It was a different kind of campaign,” he added while at party’s Election Day gathering at the Polish Citizens Club. “I got called a lot of names, but I ignored the names and went and did my job.”

Davis, while at the Philly Bar and Grill Tuesday, said “nothing is going to change over the next two years.”

“Nothing is going to change at all. The roads are still going to fall apart, the water lines aren’t going to get any attention, there’s going to be no change in ethics reform whatsoever. The corruption is going to continue. Albany is a cesspool. That’s why I decided to run.”

Control of the state’s upper chamber remains in limbo as absentee ballots are counted in tight downstate races. The GOP went into the election with 31 seats but enjoyed a majority thanks to a tenuous allegiance with Brooklyn Democrat, Simcha Felder.

Several reports, though, say Election Day results put the Republicans in control with 32 seats while the Democrats are hoping absentees change the results of two races.

The power struggle within the chamber is further complicated thanks to a seven-member coalition calling itself the Independent Democratic Conference, a group of Democrats who have in the past sided with the GOP.