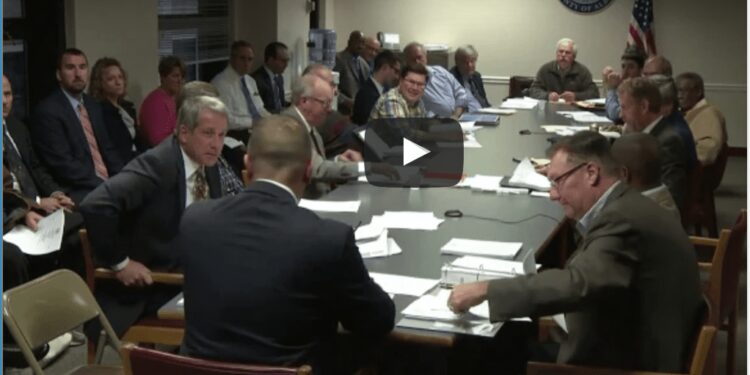 ALBANY – Jack Flynn, the county Democratic Party chairman who was abruptly fired from his post with the Board of Elections last month, was recently hired at the Sheriff’s Department, and some legislators are taking exception.

During a budget meeting earlier this week, Legislator Mark Grimm (R-29th District) asked Sheriff Gregg Apple about why Flynn was hired. (see the video below)

“This person was fired by the election commissioner and he was placed on your payroll three days later,” Grimm said. “What were the circumstances of that hire.”

The sheriff responded honestly, to a smattering of laughter around the room: “He needed a job. He has young kids at home.”

“Were there any other applicants for the position?” Grimm asked.

Legislator Gary Domalewicz, (D-11th District) tried to stifle Grimm as he was questioning Apple, claiming that the body was not allowed to talk about personnel issues. Grimm continued to pepper Apple with questions.

The sheriff said he put Flynn, who is related to County Executive Dan McCoy by marriage, in an existing paramedic budget line and then asked for a re-classification of the position. He did say the money for an assistant youth coordinator is in the 2017 budget, which is what the committee was discussing.

“I know Jack personally,” Apple said. “He has a background in youth activities and he has coached youth soccer and I think he will do good work.”

Flynn ousted the former party chair, Carolyn McLaughlin, last month, and his supporters, at the same meeting, tried to table the re-appointment of Matthew Clyne as elections commissioner.

That motion failed and the committee recommended Clyne to another two-year term. The following day, Clyne fired Flynn from his $48,500 a year position.

Flynn will make $48,450 at the newly created position within the Sheriff’s Department.

Check out the video of Grimm, Apple and Domalewicz below: