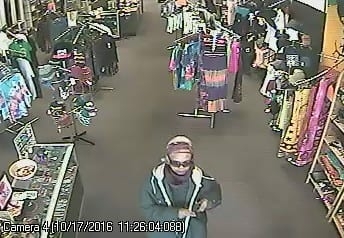 Colonie police are looking for this woman in connection with a robbery at the Deja Vu store on Wolf Road. Photo via Coloine police.

COLONIE – Police are searching for a woman who robbed the Déjà Vu store on Monday, Oct. 17.

According to Lt. Robert Winn, the woman entered the Wolf Road store at 11:27 a.m. and demanded $300. She made a motion under her coat that appeared to be a possible weapon. No weapon was displayed or observed.

The clerk handed the woman $174 and she fled on foot. She was not located by responding officers or a K9 from the Albany County Sheriff’s Office.

She is described as a short, light skinned black or Hispanic female in her 40s with an average build. Her hair may have been braided. She was wearing a dark coat, black large framed sunglasses, leggings with unknown writing, brown shoes and a maroon scarf covering her head.

Anyone with information is asked to call Colonie police at 783-2754.