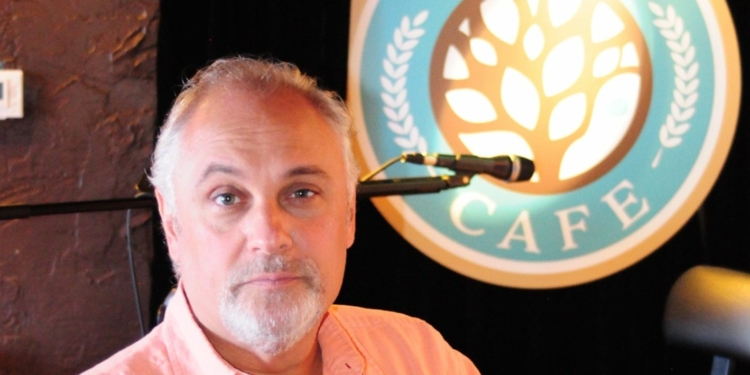 Joe Ventura at The Eden Cafe. Photo by Michael Hallisey/TheSpot518

LOUNDONVILLE — There is more than meets the eye of the novice customer walking into Eden Cafe.

Take in, for an example, the Tree of Knowledge — complete with the apple — incorporated into the cafe’s logo. Wrapped around the logo is the coffee house’s full name: Eden Advisory Services Cafe.

Certainly, Eden Cafe is a coffeehouse. The menu offers up witty options to choose from. An assortment of muffins are offered under “Do you know the Muffin Man?,” or a “No Soup For You!” featuring a choice between New England clam chowder or lobster bisque. (There’s even a response to Bruce Feirsein’s bestseller with  “Real Man Quiche.”) And, for sides, you can order up a financial adviser for 20 minutes.

“Technically, we’re an advisory services practice that has a really cool lobby…. I was in the advisory services industry for 28 years. 2008 had a lot of turmoil in the market… It was a nightmare internally and externally — Ventura walked away. For three years he took on business consulting jobs while on sabbatical, no financial advice because he signed a non-compete agreement. While on sabbatical, he questioned if he would ever go back into advising. Despite the headaches he walked away from, he enjoyed interacting with his clients. “The one part that I really liked about the business was the people, and building relationships.”

“Our business is a relationship business,” said Ventura, speaking of the advisory side of the cafe business. Back when he worked out of the traditional office space business model, Ventura said he recognized that he build his best client-advisor relationships outside the office. “And, I said [to myself], ‘I wonder if I could open a cafe as a lobby and do my business.”

Ventura said that in the few months the business has been open, the accounts his advisory practice manages value more than $3 million. “In two months, so I think we’ll be at $30 million by 18 months.”  And, that’s where Ventura hopes to cap the advisory business. Anymore would involve expanding the present location, assuming the cafe end of the operations breaks even.

“And, I haven’t tried to prospect the coffeehouse clientele.” said Ventura. “But, what happens automatically is that they ask me about it. It’s on the sign, it’s on the literature, it’s on the sticker, it’s on the cup. I tell them my story and how I did business, this is how I do business now.”

With the nature of the investment business based on getting to know your customer,” advisors are apt to ask probing questions about age, what do they hold in assets and what are their financial goals, all in order to gauge a client’s investment risk. Placing everyone in a comfortable environment helps put things at ease. “Money is the gateway to everything else in your life,” said Ventura. “When you start talking about money, before you know it you’re talking about the problem that they had with their son. They’re talking about this problem or that. Over the years, you learn about everything there is to know about that family. You are a confidant, maybe more than an attorney, or an accountant or a doctor, even.”

This brilliant flash of an epiphany for Ventura was approached with initial apprehension. At first, he didn’t share it with his wife, “because I thought it was crazy,” he said. He broached the subject with a close friend, he didn’t seemed moved by the idea. But, a few days later, Ventura received a text asking for him to check out a story online.

Turned out MassMutual had recently started a subsidiary business called Society for Grownups in Boston. Again, a noninvasive environment marketed towards millennials, with the focus of teaching those who walk in the importance of financial planning, and spending wisely. That reaffirmed Ventura’s idea, and opened Eden Cafe late last year. Now, there are other investment firms installing Starbucks in building lobbies, because preparing your clients to talk about their nest eggs sometimes requires a jolt of caffeine.

The learning is not limited to those looking to diversify their investment portfolio. Creative-minded people devoted to music and art wind up with an education, too. Like any coffeehouse worth its weight in beans, Venutra welcomes in musicians for live music, and artists to showcase their artwork in the front lounge. But, he said, he places an emphasis on self promotion. Musicians sell tickets, artists develop posters. It’s the best lesson to teach anyone, creative or corporate-minded, and that is to learn how to sell yourself.

Ventura hosts a financial seminar once a month, and various types of meet-ups are scheduled (just check out the chalk board in the back). Otherwise, you can expect “Together Tuesdays and other weekly specials each Friday and Saturday night.

“I run a cafe,” said Ventura, “but the baristas and managers can basically run it while I can sit with my clients and have breakfast. Have lunch. Have dinner. I can invite them to listen to an acoustic guitarist. Every so often, I can get up and play it myself, which I love to do.”

NIGHT and DAY: Ellen Sinopoli and the Mermaid Theatre of Nov Scotia