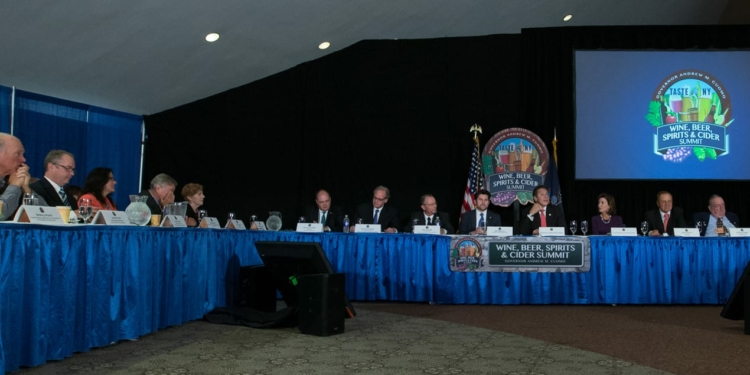 ALBANY COUNTY—New York State farm craft beverage producers are now able to serve wine, beer and spirits by the glass under new legislation signed by Gov. Andrew Cuomo on Tuesday, Sept. 13. Bill S.5707-A/A.7960-A now allows farm wineries, breweries and cideries to sell any New York-made farm alcoholic beverage by the glass at their production facility or off-site branch store; under previous law, farm manufacturers were limited to selling only products by the glass they produce on site.

“The growth of New York’s burgeoning craft beverage industry is a direct result of Governor Cuomo’s leadership in promoting New York agriculture and small businesses,” said Assemblymember Patricia Fahy (D-109). “ Allowing farm cideries to serve and sell New York made beer, wine, and spirits, dramatically expands the potential for collaboration between local producers—and reinforces New York as the leader of the craft beverage revolution. I thank Governor Cuomo for signing this important legislation and Senator Amedore on his partnership on this bill.”

“As New York’s farm beverage industry continues to grow, it’s important to do everything we can to encourage further expansion of this important piece of our economy. Allowing farm cideries to offer other New York State produced beers, wines, and spirits by the glass encourages cross promotion of all the great products New York State has to offer, and will help strengthen the growing craft beverage industry throughout New York State,” said Senator George Amedore (NY-R-46).

“This bill creates parity among the various farm based licensees and supports the growth of the value added products produced by them. We will now be able to serve other New York farm based beverages to our customers in our tasting room just as those farm wineries and breweries are able to serve cider to their customers”, said Alejandro del Peral, co-founder and cider maker at Nine Pin Ciderworks. “We commend the hardworking legislators who have made this bill possible and are so grateful for their continuing support of New York agriculture.”

“We thank Governor Cuomo and the State Legislature for this exciting new opportunity for our farm business,” said Dietrich Gehring, co-owner of Indian Ladder Farmstead Cidery and Brewery in Altamont. “Now, in addition to the hard cider and beer we make with the apples, hops and malting barley we grow here in the farm we can also offer New York wine and spirits at our Tasting Room and Beer Garden at Indian Ladder Farms. The timing couldn’t be better as thousands of customers are heading to our farm this fall for apple picking season.”

The latest legislation continues the efforts of state legislators and the office of the executive to support craft beverage producers in New York state. Since 2011, the state has implemented a series of significant reforms and expanded programs to help grow the craft beverage industry, including creating new farm-based manufacturing licenses, launching a $60 million statewide promotional campaign and hosting wine, beer and spirits summits across the state.

New York is now home to over 500 farm wineries, breweries, distilleries and cideries. The number of farm wineries in New York has increased by over 60 percent since 2010, while the number of farm distilleries grew from just 10 to 95. Two new licenses have been created since 2011, the farm brewery license in 2013 and the farm cidery license in 2014—and New York is now home to 129 farm breweries and 22 farm cideries.

“As a distiller and small business owner myself,” said John Curtin, president of the Capital Craft Beverage Trail Association and owner of Albany Distilling Company. “this continues the state’s commitment to building the farm-based craft alcohol sector.”

Back in session: Capital bond project

Back in session: Goals, accolades and testing