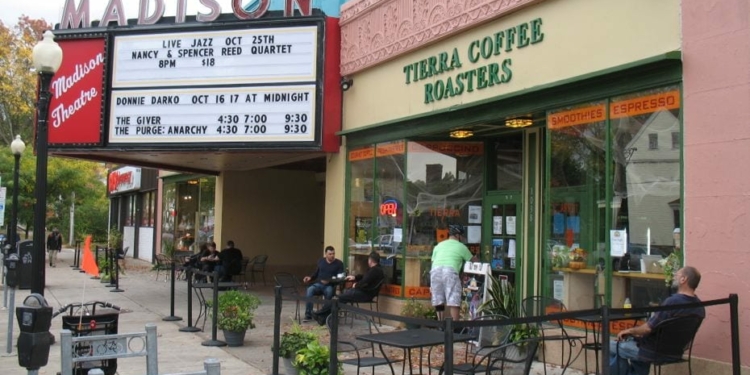 ALBANY — When I got the call from a dear friend of mine saying he had four spare seats to see Scott Sharrard at the Madison Theater, my first thought was who is Scott Sharrard and since when can I see live music at the Madison? So obviously this was not the show I was scheduled to review for this week but it did seem like the perfect show to bring my wife and a couple of our friends to since there were actual seats!

Normally I’m reviewing indie pop shows, the up and comers, rarely is there an actual seat available which is why my wife (all 4’11” of her) will not attend unless she has a seat, so this was an especially rare night. My apologies to Big Thief and Cantina, two bands from Brooklyn that put on a fantastic show at the the Hangar in Troy and who I was originally scheduled to write about. Next time!

Since I didn’t know much about Scott Sharrard except his current promotional tag line “Guitarist and Musical Director” of the Greg Allman Band, a quick Wiki revealed to me that he wasn’t just some fill in southern rock/jam band guitarist, he was a true bluesman that has been honing his skills since he was a young boy, which just happens to be the perfect pedigree for a Greg Allman fronted band.

The Madison Theater was a great intimate setting for this viewing/listening party and it seemed very much like the show was in my living room. To be able to hear the banter between the musicians on stage and the sound of the drummer saying “ready boys….1 and 2 and…” was pretty cool and truly reminiscent of the old blues clubs

Scott opened with a three song barrage of awesome blues and then informed us that they planned on stretching out and playing a good long show. As the set moved on through some covers, some early work of Scott’s as well as the current Brickyard Band record, I realized that there was a huge R&B as well Soul influence to much of what they were playing. On a couple occasions I thought I was listening to Al Green!

After nine or ten songs the band seemed to be finished and I was a little disappointed until Scott thanked us and told us that this would be a short intermission before the next set! So I reloaded at the bar with my favorite beverage, a bag of popcorn (hey we’re in a movie theater) and got ready for set two!

They opened the second set with the classic Howard Tate song “8 Days On the Road” (and my little rock and roll brain thought that was a Foghat song) and they were off and running from there. My favorite song of the night, Love Like Kerosene, was written by Scott but frequently covered by Greg Allman himself. The encore of the night was a huge medley of soul songs that validated my early thought of the soul infusion to their blues music. I need to give a shout out to the band that featured two drummers, bass and keyboard. Awesome tone and dynamics!

All in all this was such a great show at a great venue. Don’t miss the next music event at the Madison, even the popcorn was great!

Construction of new Schenectady casino on schedule to open early next year, hiring and training hundreds of employees