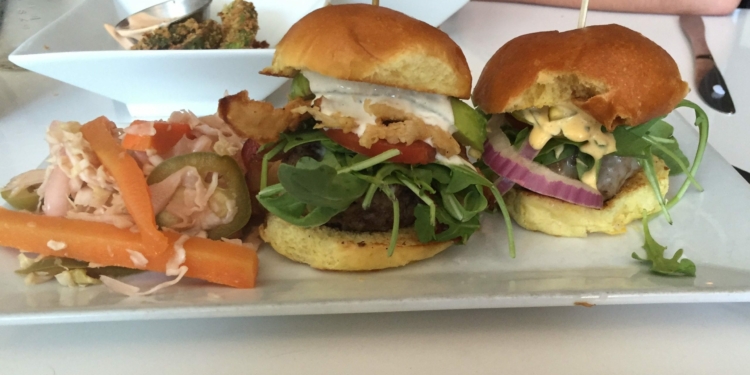 It was late Saturday morning, on a day where the temps reached 90 well before 10 a.m., when we headed over to Troy for its Farmers Market. It was the 10-year old and myself, with a list and a mission. Once we arrived, we wandered the Market for a least an hour, and then the stores for about another hour. By the time 12/12:30 approached I was hearing the “Mommy, I am starving”, and having had spent the early part of the morning at the gym, my stomach was agreeing with hers. Since we were in downtown Troy, we decided to head over to Slidin’ Dirty.

Slidin’ Dirty is known for, well, its sliders, but they also have some other really funky things on their menu. We were seated right away at a high top table, which the 10-year-old always thinks is extra fun. It took a bit of time for our server to come over, but the restaurant was packed and it appeared that there were only two people working the floor (and that included the bar). When the server finally did come over, she was rushed, but nice. I ordered a Bloody Mary, the 10-year-old ordered a soda, and we ordered Avocado Fries. Oh, yes, Avocado Fries. The table next to us was eating them, and they looked amazing.

Once we placed the drink and appetizer order, we dove into the menu and we both had a really hard time deciding. Everything looked so good! The 10-year-old, after much debate, ultimately decided on Reuben Mac and Cheese. I went with sliders. They offer them in orders of two or three, and you can choose from “The Dirty Dozen” as to what kind you want. I went with the Ol’ Faithful and the Bacon Blue. They offer, a side of pickled vegetables for an extra dollar, and I am a fan of anything pickled, so I opted for those as well.

The Bloody Mary and soda arrived, and as far as Bloody Mary’s go (they are a staple for me), this one ranked very high. Not overly spicy, but not bland either. A nice little kick, plenty of horseradish, and enough vodka that I knew it was there, but not that it was overpowering.

In the meantime – the Avocado Fries arrived and just the sight of them, made us both want to dive head first into the bowl. They were lightly breaded with a panko crust, and served with a slightly spicy chipotle cream sauce for dipping. They were in one word “outrageous”. The breading had that light crisp, that added just a little crunch, while the inside (the avocado) was soft and warm, but not mushy or overdone. The next thing I knew, the 10-year-old was eating them two at a time! I had to actually tell her to slow down, I was afraid she would get a stomachache.

Our lunches arrived quicker than I would have thought, with there being such a big crowd. When she saw the Reuben Mac and Cheese, her eyes became massive with excitement. It was everything she loves all in one bowl. And it did not disappoint. With a creamy mac and cheese, layered with pastrami and sauerkraut and some sort of secret sauce, it was as she said “amazing”. That compliment, coming from a 10-year-old is the highest praise there is. I had a taste, and while it wasn’t for me, I could see that for what she was looking for, it was spot on.

My burgers were good, I am not going to say great, because I realized they had not asked me how I wanted them cooked, and they were fairly well done. I really like some red in my burgers, but when they didn’t ask, I guess I should have spoken up. But, as far as the construction of the burgers, it was perfect. The toppings were more than plentiful, fresh, and exactly as described. Oddly enough, my absolute favorite part of the whole lunch was their pickled vegetables. They were just so good. Big slices of carrots, cucumbers, cabbage and a few other things, all pickled to absolute perfection. I wish, they offered them for purchase to bring home!

When you are next in downtown Troy for the Farmers Market, or some other event, definitely stop in, you won’t be disappointed. Plus, at least during the day, it is absolutely kid friendly.

Elizabeth Schaefer spends the majority of her time at the gym, as both an instructor and a “gym rat,” but strategically plans on at least one “cheat” meal a week. Please submit suggestions at [email protected]