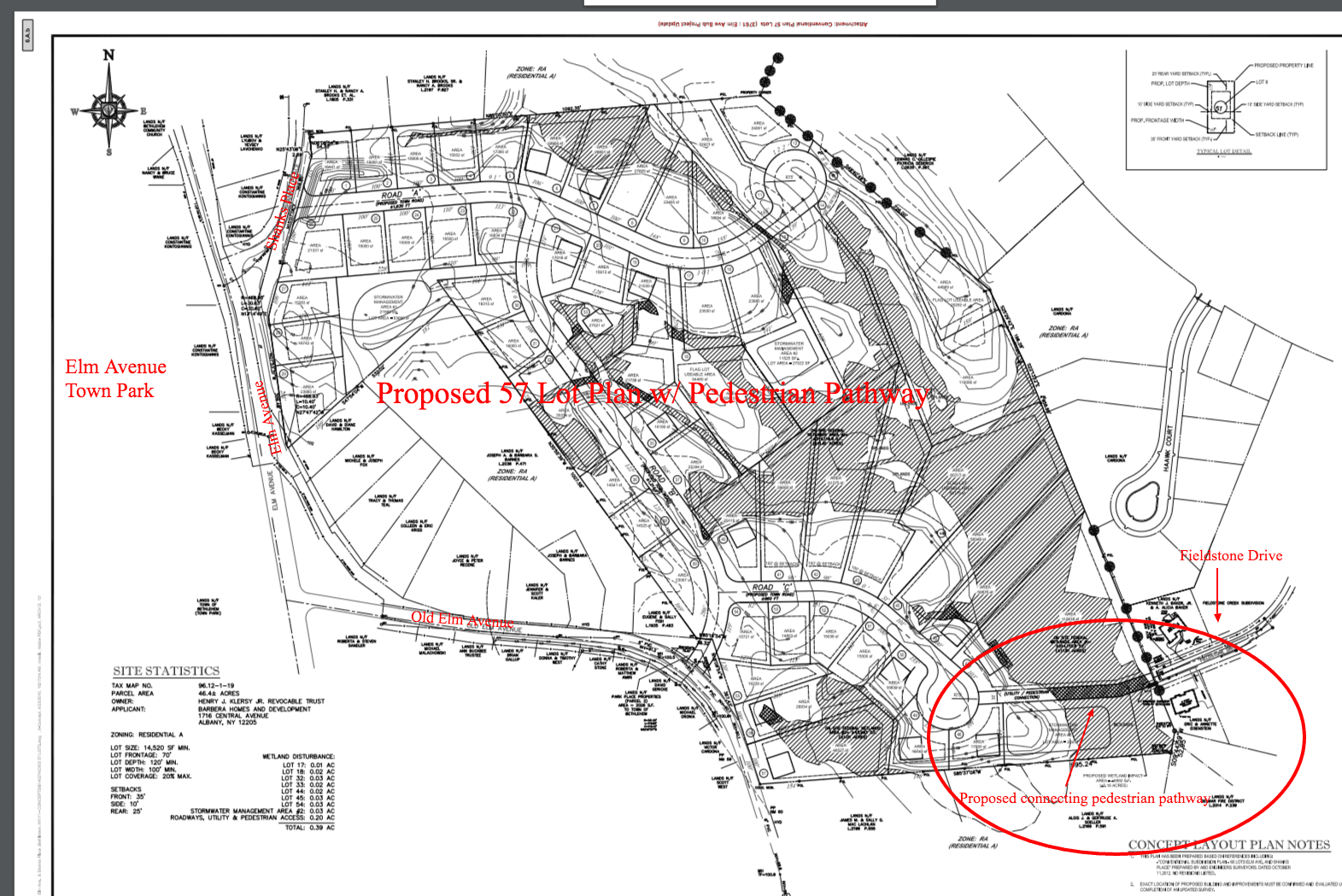 After the town planning board met on Tuesday, July 19, the pedestrian pathway depicted above seems unlikely to materialize

BETHLEHEM – More than forty Fieldstone Creek residents have signed a petition asking Bethlehem Planning Board Chairman John Smolinsky to recuse himself from the decision-making process regarding a proposed development at Elm Avenue and Shanks Place, directly between Fieldstone Creek and Elm Avenue Park.

Due to concerns about cut-through traffic and wetland disruption, a coalition of neighbors and the would-be developer of the proposed subdivision, Barbera Homes, Inc., went before the planning board on Tuesday, July 19, to request that a roadway connection from the end of Fieldstone Drive into the proposed subdivision – originally requested by the town’s highway department – be replaced with a pedestrian walkway instead. They were denied unanimously and told other alternate options were also unlikely to be considered by the board, members of which cited the town’s comprehensive plan and said that there was always meant to be a roadway connection at that end of Fieldstone Drive.

In a letter to Smolinsky, sent on Friday, July 29, Arthur Siegel, a Fieldstone resident, neighborhood representative and litigation lawyer, asked that the chairman recuse himself after prematurely calling for a vote to approve a plan that included a vehicular roadway – without the necessary public hearing.

“Unfortunately,” wrote Siegel, “by attempting to call for a vote to approve this dangerous cut through street without notice to those who will be directly impacted and without a public hearing, you have demonstrated unacceptable bias and a predisposition against any reasonable and safe alternatives.”

Update (8/1/16): Responding in an email to Spotlight News, Smolinsky wrote: “At this stage of the project, I would point out several important facts: 1) there is no change to the intention of extending Fieldstone drive; an extension was anticipated when Fieldstone was initially approved in the 1990’s and those purchasing property, assuming they  did due diligence, should have been aware of a future connection; 2) The Elm Ave Subdivision is in the very earliest stage of review and as with many projects that come before the Planning Board , this developer asked for guidance on a basic threshold issue ( i.e. the connection) before preparing the required documentation for a complete application; 3) The Planning Board has a long-standing policy of inviting public comments on agenda items at the beginning of its meetings and for certain types of approvals, must hold public hearings. The Elm Ave Subdivision must first complete its subdivision application; in addition, the developer has expressed the intention to pursue a Conservation Subdivision which requires that certain requirements be met (and they haven’t even started this submission).

“With regard to the responsibilities of the Planning Board and to mine as Chairman, our guidance is embodied in the Town Code, the Comprehensive Plan, and various other Planning policies and documents. Our decisions are often a balancing of many different interests and are guided by the applicable procedures. I won’t recite the  Subdivision code here but refer all to it learn more about Planning Board responsibilities and procedures.  Not everyone is familiar with the Town Code and our Planning Board procedures but we are always willing to explain how we operate to those willing to listen.”

Below is the full letter initially addressed to Smolinsky and signed by 44 residents, a July 29 response to Siegel from the town’s attorney, James Potter, and an August 1 rebuttal from Siegel to Potter.

Pat Metheny brings his friends to The Egg in January